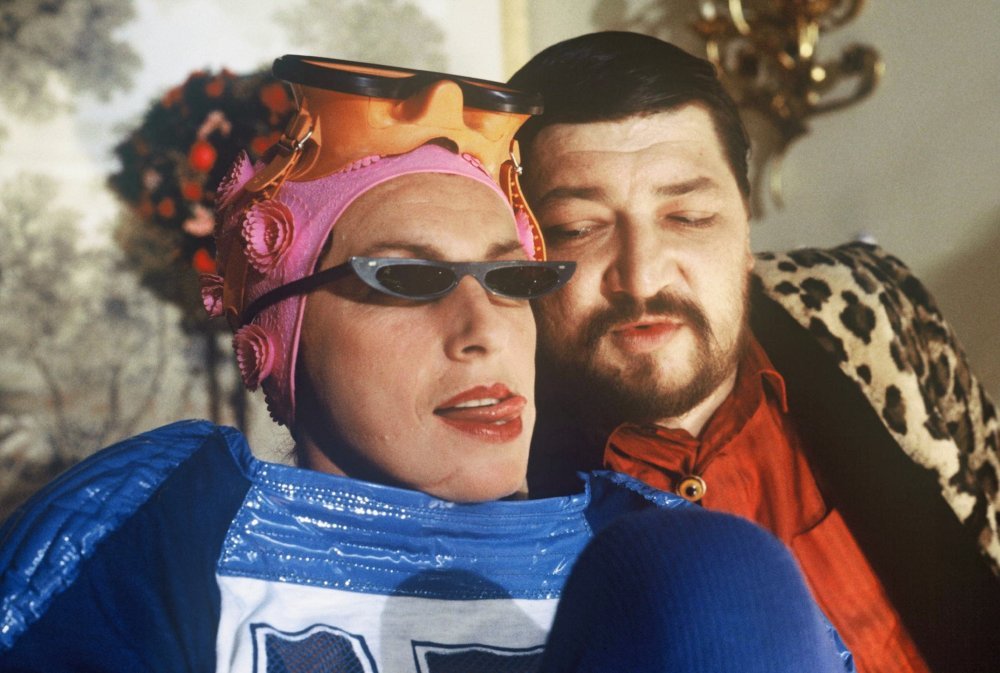 Kamikaze ’89 (Germany, 1982) – Rainer Werner Fassbinder takes a rare onscreen lead in what would be his last screen appearance in Wolfgang Kremm’s 1982 new wave science fiction cop drama. Based on a satirical science fiction novel by Swedish crime writer Per Wahlöö, it’s a cyberpunk murder mystery in a totalitarian near future, where news and entertainment is controlled by a single entity called the Combine, a corporate monopoly that narcotizes the population with mind-numbing reality TV and upbeat news reports of sunny weather. Lt. Jansen (Fassbinder) is assigned to investigate a bomb threat at the headquarters of the Combine, which is run by a man known as Blue Panther, and given 72 hours to wrap the case (which is classified as a state secret) by his Chief, who is constantly under medical treatment.

This is a cartoon of a totalitarian culture where vegetables are forbidden and the police salute one another with a thumbs up and a smile and the film is filled with comic books both real and fictional (the Blue Panther is the star of his own series, where his nemesis Kyrsnopompas has become an icon of revolution) to hammer the message home. The mystery is silly and confusing but the film is entertaining, with Fassbinder dressed in a leopard-print suit and playing racketball in a police disco in his off hours. You can see the ravages of drugs and alcohol on Fassbinder, who is pale and pudgy and often out of breath in his scenes. He was dead by the time the film was released. This is more curiosity than classic but it is goofy fun and it features Fassbinder collaborators on screen (actors Günther Kaufmann and Brigitte Mira) and behind the camera (cinematographer Xavier Schwarzenberger) and an electronic score by Tangerine Dream founder Edgar Froese that manages to evoke the eighties and the future in equal measure.

Unavailable for decades, the film was restored and re-released in theaters and on disc in 2016.

Add to Amazon Prime watchlist or watch it on Sundance Now

and other services. Availability may vary by service.
Kamikaze ’89 [DVD]

The Blu-ray and DVD feature by producer Regina Ziegler and the documentaries Rainer Werner Fassbinder: The Last Year (1982) and Wolf At the Door (2015), both directed by Wolf Gremm, plus a booklet with essays by Nick Pinkerton and Samuel B. Prime.