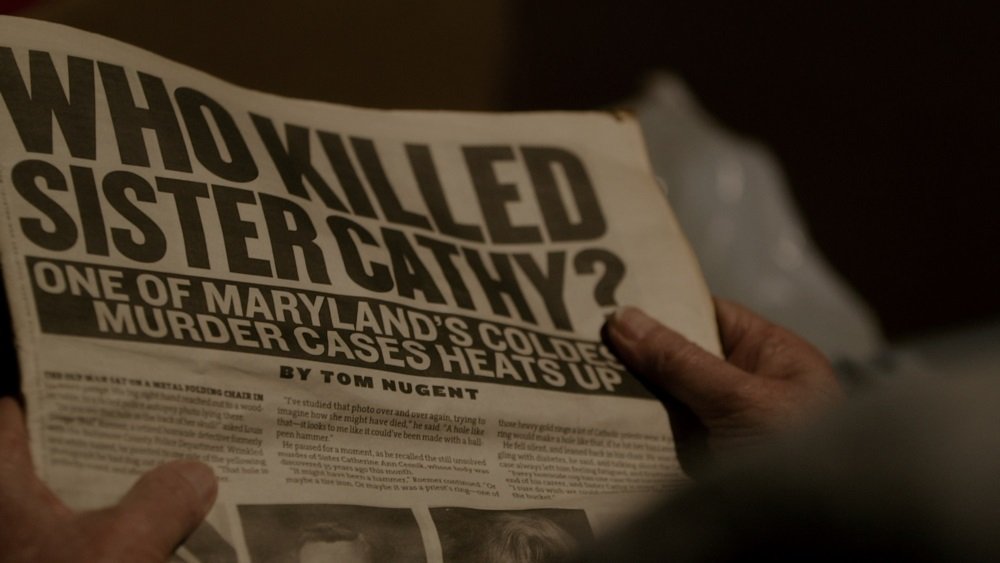 The new Netflix original documentary mini-series The Keepers delves into the decades-old unsolved murder: Sister Cathy, who taught at a parochial school in Baltimore until her disappearance in 1969 at the age of 26.

The series has drawn comparisons to Making a Murderer, the binge-worthy 2015 Netflix true crime original, but Los Angeles Time critic Lorraine Ali writes that The Keepers “is much more sophisticated and well-researched, offering several different probabilities throughout its seven episodes as to what happened to Sister Cathy. It also aims to solve a murder rather than set a convicted murderer free. It’s executed with empathy, but not to the point where The Keepers lets a foregone conclusion drive the narrative.”

The seven-episode series is available to stream in its entirety on Netflix.

Resident Evil: The Final Chapter pits Alice (Milla Jovovich) and friends against the zombies of the Umbrella Corporation one last time in the sixth film in the resilient big screen adaptation of the hit video game (R).

Available same day as select theaters nationwide is the documentary Fight for Space about the American Space Program (not rated) and available before theaters is the thriller Kill Switch with Dan Stevens (not rated).

Rebecca Hall stars in the real-life drama Christine (2016) as the Florida TV reporter who committed suicide on live TV in the 1970s (R).

The Place Beyond the Pines (2012) stars Ryan Gosling as a motorcycle stunt rider turned bank robber and Bradley Cooper as the rookie cop on his trail (R).

Riley Keogh and Jena Malone are best friends in the indie road movie Lovesong (2016, not rated).

Also new: indie drama Between Us with Olivia Thirlby and Ben Feldman (2016, not rated), surveillance thriller Enemy of the State (1998) with Will Smith and Gene Hackman (R) and comedy The Break-Up (2006) with Vince Vaughn and Jennifer Aniston (PG-13).

True stories: the seven-part series The Keepers delves into the unsolved murder of a Baltimore nun almost 50 years ago (not rated) and Laerte-se profiles the famed Brazilian cartoonist Laerte Coutinho who, at the age of 60, transitioned from male to female (not rated, with subtitles).

From Britain comes the music documentaries Bowie: The Man Who Changed the World (2016) and Sinatra: To Be Frank (2016) and natural history documentaries Animal House (2011) and The Hunt (2011), both hosted by David Attenborough.

Billy Crystal is a therapist to mobster Robert De Niro in the comedy Analyze This (1999, R) and Jodie Foster makes Contact (1997) in the science fiction drama based on the Carl Sagan novel (PG).

Lisa Bowman and Larry Fessenden are shaggy slacker outlaws in the River of Grass (1995), the newly-restored debut feature from indie filmmaker Kelly Reichardt (not rated).

Stand-up: Mike Birbiglia: What I Should Have Said Was Nothing (2008).

The romantic weepy Me Before You (2016) stars Emilia Clarke as an adorably awkward caregiver who falls for her patient (Sam Claflin) (PG-13). (Amazon Prime and Hulu)

Indie drama Before I Disappear (2014) stars Shawn Christensen as a suicidal misanthrope and Emmy Rossum as his estranged sister (not rated).

Isaiah Washington and Tim Blake Nelson star in Blue Caprice (2013), based on the true story of the 2002 Beltway Shooter (R).

Streaming TV: Underground: Season 2, the acclaimed WGN series built around the Underground Railroad in the pre-Civil War south, and thriller The Last Ship: Season 3 from TNT.

The true-crime documentary Mommy Dead and Dearest delves into the devastating story behind a high profile murder (not rated).

Andrea Arnold’s Fish Tank (2009), starring Katie Jarvis as the 15-year-old daughter of a single mother and Michael Fassbender as her mother’s predatory boyfriend, is presented with the supplements of the Criterion disc release, including three Arnold’s award-winning short films: Milk (1998), Dog (2001), and the Oscar-winning Wasp (2003).

The BBC mini-series Decline and Fall, based on the comic novel by Evelyn Waugh and starring Jack Whitehall, David Suchet, and Eva Longoria, makes its stateside debut on the streaming service.