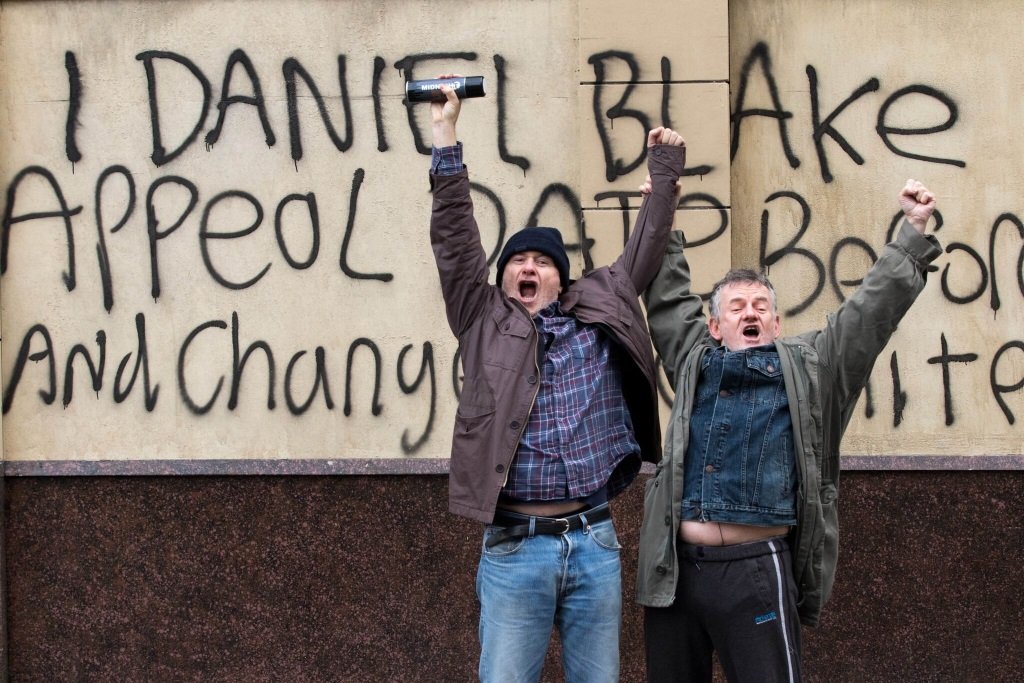 Ken Loach won the Palm d’Or at the 2016 Cannes Film Festival for I, Daniel Blake (2016), a classic Loach social commentary taking on the struggles of the working classes and underclasses let down by society.

This one, about a 59-year-old carpenter and widower in Newcastle recovering from a heart attack while fighting for assistance, is at once an angry assault on a bureaucracy that treats people as case numbers to be filed and shuffled on, a defiant cry for dignity and respect for the folks at the bottom of the social ladder, and a touching portrait of human compassion and contact in the cracks of the system and the queues of people lining up for government assistance.

The paperwork deems Daniel (played with incredulity and dogged determination by comedian Dave Johns) fine for work, no matter that his heart surgeon forbids him from returning to work. When the state cuts off his disability assistance, he is forced into a surreal maze with no exit.

Loach sustains the grueling ordeal with a tart humor, courtesy of John’s exasperated commentary at every bureaucratic roadblock, and his outreach to a single mother newly arrived in the area and struggling to feed her two kids while her assistance is on hold. It’s not just the compassion, it’s the feeling of being useful that the system his systematically beaten down. Katie (Hayley Squires) is not the daughter he never had, she’s just someone who needs someone on her side. That’s something Daniel can provide and it gives him reason to keep plugging away.

It’s written by Loach’s longtime collaborator Paul Laverty and it won the Palm d’Or at the Cannes Film Festival and the BAFTA for “Outstanding British Film of the Year” among its many awards.

Leaves Hulu at the end of June. Add to My Stuff on Hulu

, iTunes, GooglePlay and/or other services. Availability may vary by service.
I, Daniel Blake (The Criterion Collection) [Blu-ray]