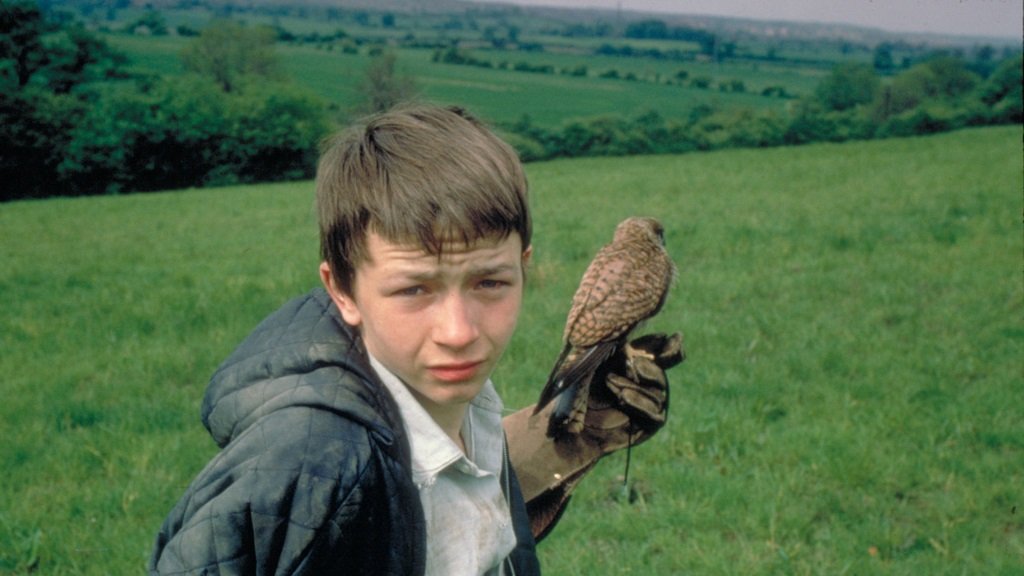 The story of a boy and his bird, Kes (1969) is something of a small cinematic treasure in Britain.

Set and shot in the North of England and cast overwhelming with non-professional locals from the area, it cast its lens on the dreary life and hopeless future of a scrawny, fatherless teenager, Billy Casper (David Bradley), grinding out his last days in a miserable public school where discipline and regimentation trumps education and encouragement. Bored and bullied (by students, teachers, and his bitter older brother), this curious, restless boy is inspired to capture and train a young kestrel that he captures from a nest in a nearby ruin, all that’s left from a medieval castle in a nearby field, and the film soars with Billy’s joy and exhilaration as he trains and exercises the young kestrel.

Kes is the second theatrical feature by director Ken Loach, who came out of British television as a socially and politically committed filmmaker who now as then focuses his lens on the poor, the working class, and the disenfranchised. In this film, based on the novel “A Kestrel for a Knave” by Barry Hines, he immerses us in the culture of a coal town where the kids have little hope of escape. Billy swears that he will not go “into the pits” like his brother but he has no illusions that he’ll end up in some dead end job he hates. Yet for all the misery around Billy, from his chilly home and the bed he shares with his bullying older brother to the tyrant of a principal who gives out corporal punishments like it’s part of the daily schedule, and the often impenetrable Yorkshire accents and dialects of the soundtrack, Kes is a lovely and touching film. Loach appreciates the cheeky wit and energy of its scruffy, scrappy hero and, in a classroom scene where he’s roused to tell this classmates about training the bird, he brings Billy to life with an outpouring of excitement and love.

Though considered uncommercial by British distributors, it was a surprise hit embraced by the public when it was finally released in 1970. It won BAFTA awards for actors David Bradley and Colin Welland and, more recently, it was voted as one of the ten greatest British films of all time in a poll conducted by the BFI.

Add to Amazon Prime Video watchlist or to My List on Criterion Channel, or stream free on Kanopy or on Hoopla, which are available through most public and college library systems.

, iTunes, GooglePlay and/or other services. Availability may vary by service.
Kes (The Criterion Collection) [Blu-ray]

Criterion’s release on DVD and Blu-ray is newly restored and digitally mastered in a version approved by director Ken Loach and director of photography Chris Menges. The Yorkshire accents and dialect is at times impenetrable. An alternate international soundtrack, where the actors overdubbed some scenes to make the dialogue easier for American ears, was recorded and offered as an optional soundtrack. There is also an English subtitle track but it’s not accessible from the disc menu; you have to go into the player options to access the subtitles.

Criterion offers an excellent array of supplements, beginning with the original 45-minute documentary “Making Kes” with new interviews with Loach, Menges, producer Tony Garnett, and actor David Bradley, who was cast from one of the local schools and provides the defining description of Billy’s life in explaining his own: “We were raised as industry fodder, as opposed to cannon fodder.” The disc also features The South Bank Show: Ken Loach, a 1993 program of the BBC arts documentary series with a very interesting give-and-take between Loach and the show’s host, and Loach’s acclaimed and influential 1966 television feature Cathy Come Home, with an afterward by critic and film historian Graham Fuller. Fuller also contributes the original essay in the accompanying booklet.