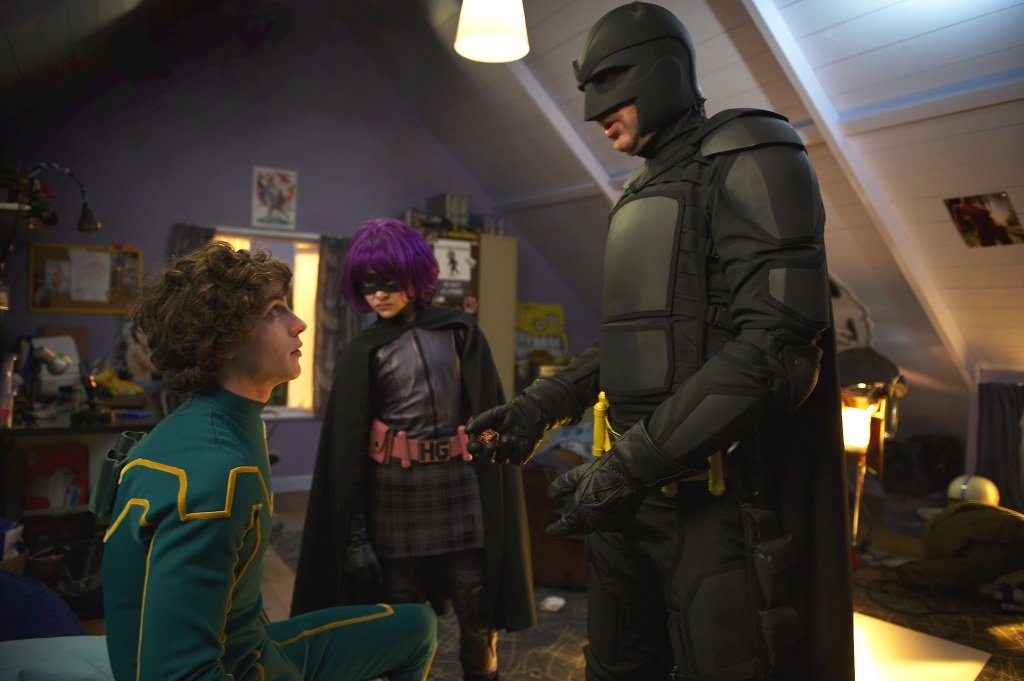 Kick-Ass (2010) is a comic book movie with a killer premise: what if regular people in the real world became costume vigilantes like the superheroes in comic books?

Based on the uber-violent comic by Mark Millar and John Romita Jr., this film tosses a high school teenager (Aaron Johnson) into a crime-fighting culture he isn’t the least bit prepared for. Dave dresses up and plays at being a superhero without having any real talent for it, or even much preparation. His only real qualifications: steel-reinforced bones and dulled nerve endings thanks to a beating and a car wreck in his first effort at superheroing. But his arrival makes him a sensation and brings out others, notably Hit-Girl (Chloë Grace Moretz), a savage pre-adolescent girl who has been trained by a mentally unbalanced (yet absolutely loving) father (Nicolas Cage) into becoming a ferocious killing machine.

Yeah, it’s completely f*****d up, and that’s what is both right and wrong with the film. Your appreciation will depend in how much you can appreciate its utter wrongness as a twisted virtue. Or how much you appreciate Nicolas Cage’s impression of Adam West’s Batman.

Matthew Vaughn directs with plenty of brutal black humor, but he can’t quite follow the real-world blowback all the way down the inevitable spiral of doom. For all the collision between adolescent fantasy and material world reality, it’s just another kind of superhero fantasy, but with more blood and expletives along the way.

The Blu-ray and DVD from Lionsgate feature a solid commentary track by director/co-writer Matthew Vaughn and the featurette “It’s On! The Comic Book Origin of Kick-Ass” (with creators Mark Millar and John Romita Jr. and others discuss the project’s inspiration and the collaborative process), plus a gallery of production art. The Blu-ray supersizes the supplements. In addition to the audio commentary is the “Ass-Kicking Bonus View,” which reverses the usual audio-video commentary approach by filling the screen with on-screen commentary by Vaughn intercut with cast and crew interviews and behind-the-scenes footage while the film plays a reference track in a corner of the screen. “A New Kind of Superhero: The Making of Kick-Ass” is a four-part documentary that played straight through (and there is a “Play All” function) is almost two hours long, filled with the kind of detail that genre-junkies crave: stunts, special effects, sets, locations, and lots of interviews with the cast and crew taking on the extreme nature of the comic book material. The Blu-ray edition also includes a bonus DVD and digital copy of the film.