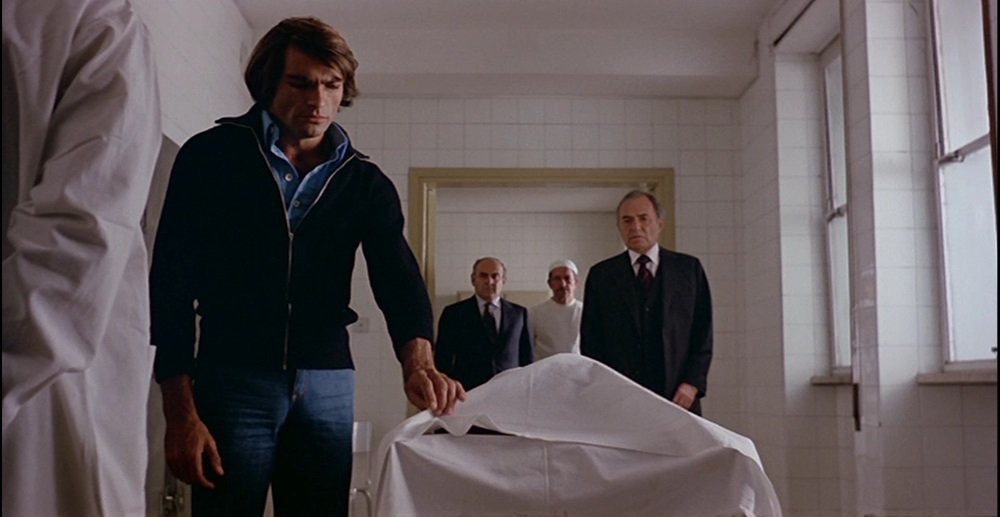 Luc Merenda, the corrupt cop of Fernando di Leo’s Shoot First, Die Later, takes the lead again in di Leo’s Kidnap Syndicate (Italy, 1975) but this time he’s neither cop nor crook. Mario Colella is just a simple mechanic and working class single father who gets caught in the middle of mob business and corporate gamesmanship when his schoolboy son is grabbed up in the kidnapping of a rich man’s boy.

This is a much angrier film and the outrage is focused on both the kidnappers and the dispassionate industrialist (James Mason, playing the part with silky corruption and unfeeling arrogance) whose son was the original target. Don’t expect a variation of High and Low here or any empathy from the tycoon. Mario’s boy is collateral damage in an elaborate game where tycoons and criminals treat human life as a business deal, something to be negotiated for maximum leverage. The innocent kid is just another bargaining chip and that sends the level-headed Mario out to exact his own justice.

One of di Leo’s greatest strengths is his fascination with and focus on process and detail, and one of the pleasures of his mob movies is the detail with which he observes the execution of everything from a payoff to an assassination. The kidnapping here is shown not just as an elaborately-planned job but a veritable cottage industry masterminded by the mob and farmed out to hired thugs, who follow strict orders as they carry out the dirty work. There’s a corporate hierarchy to the whole dirty business, a parallel that shows big business and mob business as just two sides of the same enterprise. It’s also the key to Mario’s vengeance. He’s a former motorcycle racer who retired to look after his son, so where Shoot First, Die Later was highlighted by elaborate and visceral car chases, the final act of Kidnap Syndicate is built on Mario’s biker skills to track the chain of command and complete his vengeance. His revenge isn’t a matter of balancing the scales, it’s simply payback from a man who hasn’t anything left to live for, and thus nothing to lose.

Kidnap Syndicate is on Blu-ray and DVD in the box set Fernando Di Leo: The Italian Crime Collection Vol. 2, mastered from the original 35mm negative (it still looks a little rough but that’s a matter of wear on the original elements; the image is sharp and vivid) and with original Italian soundtrack with new English subtitle translations plus an optional English dub soundtrack.

Supplements in this set include five interview featurettes originally made for Italian DVD, some of them produced before Di Leo’s death in 2003: “The Good Fellas” (18-minute remembrance of Naked Violence with Fernando Di Leo, actor Pier Paolo Capponi, and others), “Fernando di Leo at the Cinematèque Français” (15-minute discussion with programmers at the famed cinemateque discussing Di Leo’s work), “Master of the Game” (25-minute interview with Di Leo), “The Second Round of the Game” (21-minute featurette with actor Luc Merenda, assistant director Franc Lo Cascio, and editor Amedeo Giomini), and “Violent Cities: The Other Fernando Di Leo Trilogy” (a 28-minute discussion of the early career of Di Leo with the director, Meranda, and other collaborators). Also includes a booklet with (mostly anonymous and grammatically challenged) notes on the films