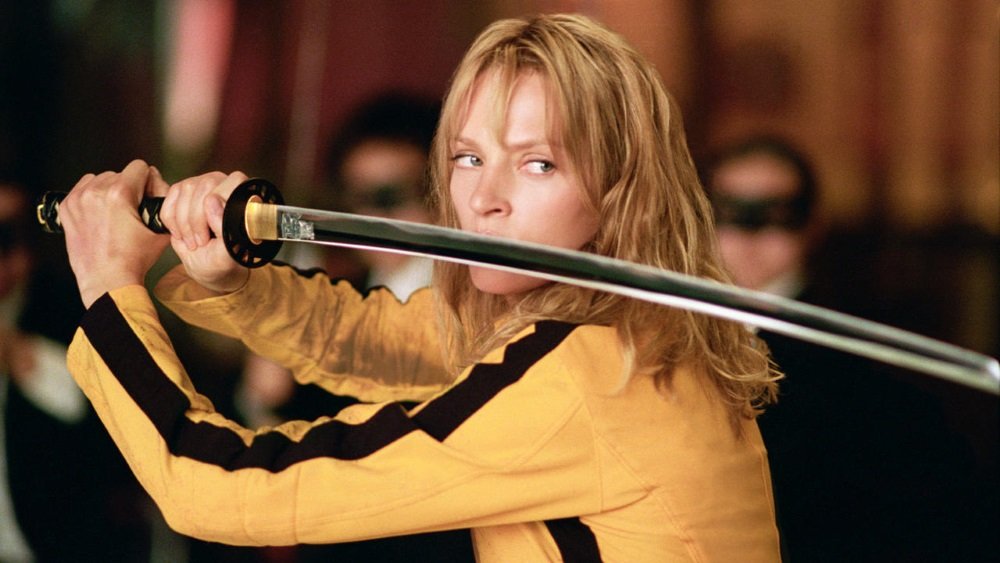 Kill Bill: Volume 1 (2003), Quentin Tarantino’s fourth film (as he insists in the credits) returns to his old passions with a new weapon in his arsenal: a visual eye. Tarantino created the role “The Bride” for Uma Thurman, who plays the lead with fierce intensity. A professional assassin left for dead, she wakes up from a coma years later, wills her atrophied limbs to life, and embarks on a mission of revenge, though not necessarily in that order.

The tale is pure pulp, a catalogue of seventies martial arts revenge dramas and American B-movie action thrillers, and the style is pure Tarantino: snappy titles, a timeline that leaps back and forth through the story, a mad mix of styles and musical references, and an attitude of loving affection for his inspirations. He has fun with the conventions and the set pieces without making fun of them. The violence is extreme but beautifully choreographed (by Yuen Woo-ping) and shot (by Robert Richardson), and the film looks better than any of Tarantino’s previous work.

The mood shifts in Kill Bill: Volume 2 (2004) as the Bride resumes her mission of vengeance and the film slows her down as she nears her goal: Bill (David Carradine), the old lover who tried to murder her and now raises her child. Carradine’s Zen-like composure makes Bill (absent from the first film but for his voice and hands) into a philosopher warrior, older and wiser and full of regret for his actions… but not enough to stop the inevitable.

Where Volume 1 is about action, Volume 2 is talk, Tarantino’s stock in trade, and it’s good (if somewhat long winded) talk. It’s also another roll call of Tarantino’s cinematic loves (Village Voice critic J. Hoberman describes it as “less labor of love than religious shrine”), complete with a flashback to the Bride’s martial education under an irascible old monk (Gordon Lui) directed in a recreation of a seventies Hong Kong chop-socky revenge flick. The result is odd and not always successful, and at over two hours may be too much of a good thing, but it is full of magnificent moments and loving details, and together with Volume 1 it is the ultimate homage to the films that shaped the creative identity of Tarantino.

On DVD and Blu-ray and on SVOD from Amazon Prime (Kill Bill: Volume 1

) and other services. Availability may vary by service.
Kill Bill: Volume 1 [DVD]