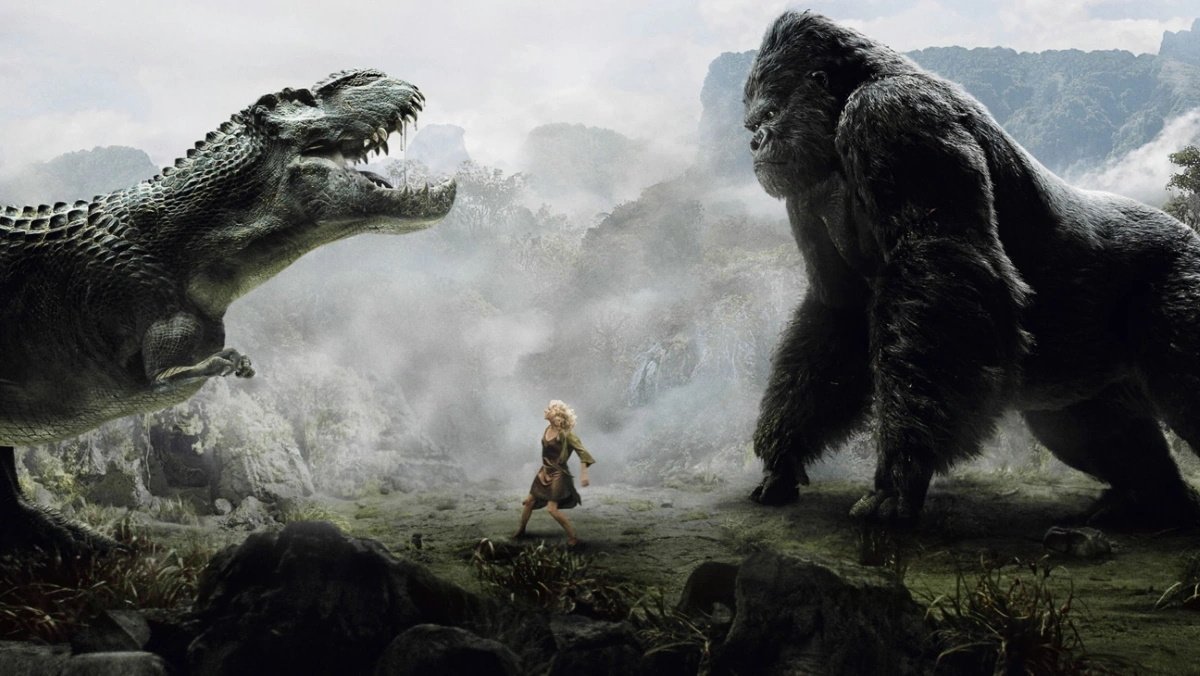 The 800-pound gorilla of the 2005 holiday season was Peter Jackson’s loving, no-holds-barred remake of his favorite movie of all time.

King Kong (2005) is an old-fashioned monster movie/jungle thriller pushed to the limits with new technology by a filmmaker with both the skill and the heart to recapture the thrills of his adolescent moviehouse dreams. It’s a remake of a 1930s classic via the wondrous creatures and primeval world of Jurassic Park and the devil-may-care cliffhanger spirit of Raiders of the Lost Ark.

Jackson sets it in the same era as the original film—the depths of the depression in the early 1930s—with Naomi Watts as aspiring actress Ann Darrow, a young woman so desperate that she takes a job on a mysterious movie safari for director and adventurer Carl Denham (Jack Black). Where Denham was a reckless visionary in the original film, Jackson recasts him as a morally ambivalent entrepreneur who lies, manipulates, kidnaps, and risks the lives of everyone around him, first to get his picture and then to capture the mighty ape and get his prize discovery back to America.

In fact, it’s a little too much of a good thing, running almost twice as long as the original and filled with unnecessary side characters and spectacular scenes of man versus monster and ape versus everyone that go on long past the moment you’d think he could sustain them.

Jackson makes it all work with his showman instinct and his unconditional love of movies. He fills all of those extraneous scenes and characters—especially those involving the cabin boy (Jamie Bell) and the African American First Mate (Evan Parke), his big brother/father figure—with a love and respect that gives the film an emotional grounding. And when Jackson is at his best as an action craftsman you overlook the CGI overkill to marvel at the scenes, especially the signature scene where Kong takes on not one but three T-Rex beasties while juggling lady love from hand to foot. It’s astounding and fierce and as impressive as any spectacle of its era.

And of course there is the performance of pioneering motion capture actor Andy Serkis, whose superb body language performance brings the completely animated Kong to life. He gives the creature an astounding personality, a playful spirit and a sense of humor. The interlude on the frozen lake in Central Park is joyous as he explores the ice and slides across it like a little kid. And the chemistry between Serkis’ beast and Watts’ beauty, much of it communicated through their eyes, gives the adventure its love story.

Adrien Brody is our human hero Jack Driscoll, Andy Serkis gets a flesh and blood role as the crotchety cook Lumpy (and in the process lands both of the film’s best death scenes), and Thomas Kretschmann, Colin Hanks, and Kyle Chandler co-star.

Winner of three Academy Awards for its technical achievements.