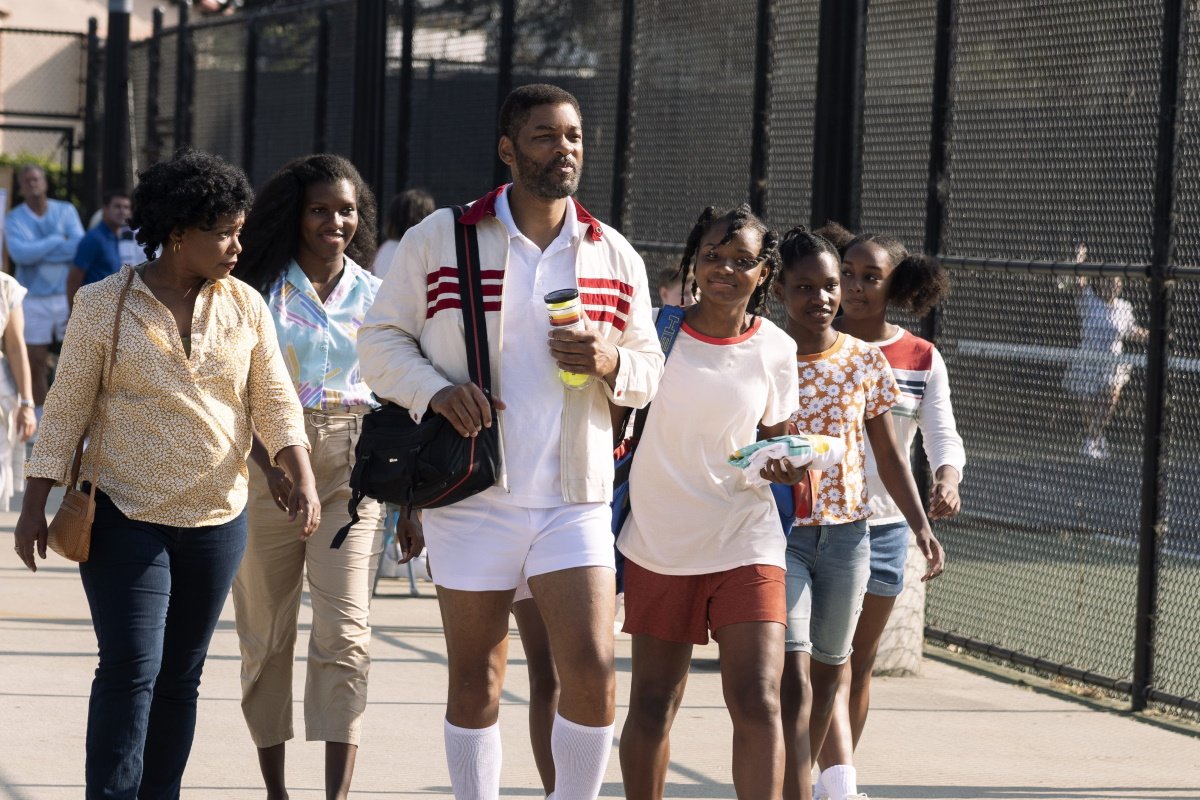 Will Smith plays the father of Venus and Serena Williams in “King Richard“ (2021, PG-13), a drama based on the complicated early life of the tennis champions and the father who drove them to success, at times to the point of obsession. Aunjanue Ellis and Jon Bernthal costar and Smith produces with executive producers Serena Venus Williams. Available to stream same day as theaters, available for 31 days only. (HBO Max)

Rosamund Pike takes the lead in the new fantasy series “The Wheel of Time“ (TV-14) as the leader of an organization training five young people in the art of magic in hopes finding the prophesized reincarnation of the Dragon. Based on the novels by Robert Jordan, it’s the latest big-budget take on a sprawling fantasy epic in the wake of “Game of Thrones.” Three episodes available, new episodes on Fridays. (Amazon Prime Video).

Titillating title aside, “Sex Lives of College Girls“ (TV-14) from creator Mindy Kaling looks at the complications that come with freedom and sexual exploration for four roommates at an Ivy League college. New episodes on Thursdays. (HBO Max)

“The Great“ (TV-MA), a satirical, lively take on the historical drama with modern sensibilities, returns for a second season with Catherine (Elle Fanning) taking the throne and becoming Empress of Russia. All episodes streaming. (Hulu)

Keepers of mythical creatures question whether they should display their rare beasts in the animated fantasy “Cryptozoo“ (2021, not rated), featuring the voices of Lake Bell, Michael Cera, Zoe Kazan, and Peter Stormare.

Two donut-shaped creatures travel in time from the 19th century to the present and discover they are “Extinct“ (TV-Y7) in this animated comedy. Features the voices of Adam Devine and Rachel Bloom.

International passport: “Prayers for the Stolen“ (Mexico, 2021, R, with subtitles), a drama about three young girls growing up terrorized by drug cartels in rural Mexico, won a special award at the Cannes Film Festival.

Holiday trimmings: “The Princess Switch 3: Romancing the Star“ (TV-G) features Vanessa Hudgens in three roles and “Mariah Carey’s All I Want for Christmas Is You“ (2021, G) turns the song and the storybook into an animated feature.

Colin Firth earned an Oscar nomination as “A Single Man“ (2009, R) in the directorial debut by fashion designer Tom Ford.

A Japanese snow monkey guided by the spirit of an American assassin takes on the Yakuza in the animated series “Hit-Monkey: Season 1“ (TV-MA), based on the Marvel Comic and featuring the voices of Jason Sudeikis, Olivia Munn, and George Takei.

The limited docuseries “The Curse of Von Dutch“ (2021, not rated) chronicles the dramatic rise and fall of fashion brand.

International passport: a pair of smalltime crooks train a giant fly to carry out crimes in the absurdist “Mandibles“ (France, 2021, not rated, with subtitles) from Quentin Dupieux.

The TV concert special “Adele One Night Only“ (2021, TV-PG) features songs from her new album and an interview with Oprah Winfrey.

True stories: the award-winning “Ascension“ (2021, TV-MA) looks at how capitalism is driving a growing class divide in China.

James Roday Rodriguez and Dulé Hill are back again in “Psych 3: This is Gus“ (2021, not rated), the third movie spinoff of the mystery comedy.

The four-part documentary “The Line“ (TV-MA) examines a 2018 military case where a U.S. Navy SEAL platoon accused its chief of war crimes.

Sally Lindsay plays a British antiques dealer who movies to a small town in France and turns detective in the six-part “The Madame Blanc Mysteries“ (not rated). New episodes each Monday.

Nicolas Cage is a criminal sent to rescue a warlord’s daughter (Sofia Boutella) in the western/samurai/post-apocalypse action thriller “Prisoners of the Ghostland“ (2021, not rated), the English-language debut of Japanese cult filmmaker Sion Sono.

“Robert Mitchum: Playing It Cool” collects 30 films spanning 50 years in the career of the iconic actor. Just a few highlights: the tough guy played a father in “The Red Pony“ (1949), based on the John Steinbeck novel, an aging rodeo rider in “The Lusty Men“ (1952), a serial killer in a preacher’s collar in “The Night of the Hunter“ (1955), and an underworld veteran caught between the cops and the crooks in the modern crime classic “The Friends of Eddie Coyle“ (1973). Also new: