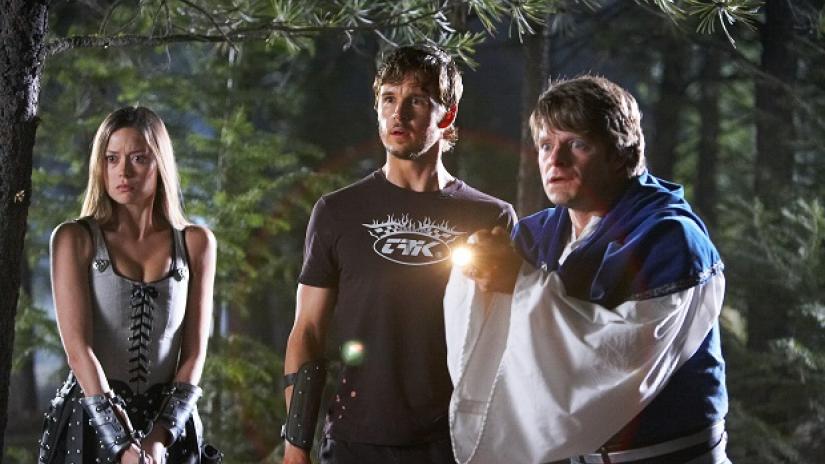 Knights of Badassdom (2013), a modest little horror comedy set in the fantasy gaming LARP (that’s Live Action Role Playing) culture, has a good time sending up its obsessive nerds and cosplay veterans gathered for a weekend championship of stage combat and mock-Shakespearean patter. Then it unleashes a succubus from hell on them.

Actually it’s Steve Zahn’s Eric, a mage armed with a really cool ancient tome he bought off Ebay, who summoned up the demon during gameplay. It was an honest mistake but the body count is real enough, especially when his Hail Mary pass of a reversal incantation merely turns the hot succubus into a scaly demon who wades through the would-be warriors like a kid stomping through his toy soldiers.

The producers line up a low-budget cast with high genre cred and they too seem to have a good time: Ryan Kwanten (the spacey Jason of True Blood) as the aspiring black-metal star reluctantly dragged along by his buddies, Peter Dinklage (Game of Thrones) as the stoner who preps by downing a bag of shrooms, and Summer Glau (Firefly) as the warrior babe all too used to the geek boys hitting on her. Jimmi Simpson and Danny Pudi (Community) are well cast in supporting roles. They don’t play caricatures of gaming obsessives so much as overly enthusiastic fans carried away with the theatrics of it all.

The film was reportedly recut without the participation of director Joe Lynch and the result looks a little like something tamed down for a general audience, but the attitude and energy keep it going through the familiar rhythms of the story. And refreshingly for an R-rated comedy, this is geek-girl friendly, with Glau shrugging off the advances and outbattling everyone with hearty high spirits and wit. No gratuitous nudity here but plenty of over-the-top stage gore, the kind of goopy excess that makes demons-versus-mortals violence less rather than more realistic.

, iTunes, GooglePlay and/or other services. Availability may vary by service.
Knights of Badassdom [Blu-ray]

The Blu-ray and DVD include the Comic Con panel with director Joe Lynch and six stars of the film (all the major cast members apart from Zahn). There’s also a seven-minute interview with Lynch and a handful of brief cast interviews and featurettes, all less than two minutes apiece.