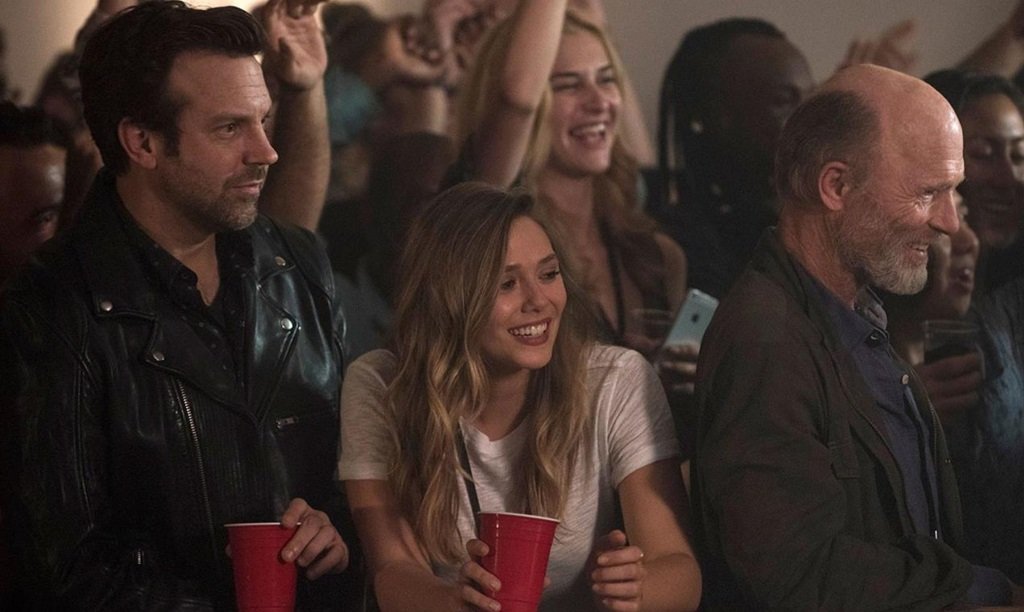 Kodachrome (2017, not rated) stars Jason Sudeikis as a record industry burnout who reluctantly joins his estranged, dying father (Ed Harris) for a road trip to the last lab in America that processes the famed color film. Elizabeth Olsen co-stars as the father’s nurse, nudging them toward reconciliation.

Los Angeles Times film critic Kenneth Turan praises the performance of Ed Harris in what is otherwise “a solid citizen of a movie. Its emotional story of father-son dynamics with a hint of romance thrown in, all set against the world of professional photography, is not without its pro-forma elements. But Mr. Harris is not one of them…. Harris brings so much all-in commitment to the part, has so fearlessly invested himself in the character, that we have to sit up and take notice.”

It premiered at Toronto International Film Festival and will open in a few theaters on the same day it debuts on Netflix.

The Netflix Original documentary Mercury 13 (2018, not rated) presents the women who passed NASA’s grueling tests for the first space flight—some of them outperforming the men—only to be dismissed entirely in favor of an all-male astronaut program.

The Oscar-nominated Loving Vincent (2017, PG-13) explores the last days of Vincent Van Gogh with detective-story structure right out of “Citizen Kane” with a film animated entirely with oil paintings in the artist’s distinctive impressionist style, with the thick, colorful lines and a scratchy mix of bold colors. Streaming on Hulu.

The Oscar-nominated drama The Post (2017, PG-13) takes on the responsibility of journalists to speak truth to power with the story of the stakes behind The Washington Post’s decision to publish the Pentagon Papers in 1971. Meryl Streep and Tom Hanks star in the old school newspaper drama directed by Steven Spielberg. On Cable and Streaming VOD. Also on DVD and at Redbox.

The Commuter (2018, PG-13) is another far-fetched yet highly entertaining action thriller with Liam Neeson doing his aging action hero thing. Also on DVD and at Redbox.

Diane Kruger won the best actress prize at Cannes for her performance as a grieving wife and mother in Fatih Akin’s In the Fade (Germany, 2017, with subtitles, R), an intimate thriller that plays out against the culture of white nationalism in Germany.

Nowhere Boy (2009, R) tells the largely unknown story of teenage John Lennon (played by Aaron Taylor-Johnson) and his emotionally turbulent life save in part by music. Reviewed on Stream On Demand here.

Also new: coming-of-age high school comedy Dude (2018, not rated) with Lucy Hale and Alexandra Shipp and romantic drama Porto (2016, not rated, with subtitles) featuring Anton Yelchin in one of his final performances.

Foreign Affairs: the crime epic Chasing the Dragon (China, 2017, not rated, with subtitles) charts the rise and fall of two notorious gangsters (played by Chinese superstars Donnie Yen and Andy Lau) who thrived in the rampant corruption of Britain’s colonial rule of Hong Kong in the 1960s. Reviewed on Stream On Demand here.

Streaming TV: the addictive legal thriller How to Get Away With Murder: Season 4, with Emmy-winning Viola Davis and the time-travelling superhero series Legends of Tomorrow: Season 3 are available weeks after their network runs.

True stories: Dope: Season 2 continues following the drug war in America and beyond.

Kid stuff: Spy Kids: Mission Critical: Season 1 is an animated series based on the kid-friendly movies about teenage agents.

The documentary Aida’s Secrets (2017, not rated) traces a family mystery back to the Holocaust and forward to an unexpected family reunion.

Paddy Considine play a real-life 19the century Scotland Yard detective in the early years of the organization in The Suspicions of Mr. Whicher: The Murder at Road Hill House, the first of four feature-length mysteries made for British television. Prime Video features the whole set: The Murder on Angel Lane (2013), Beyond the Pale (2014), and The Ties that Bind (2014).

Alexandra Shipp and Brianna Hildebrand are the Tragedy Girls (2017, R) in this high school horror film for the social media era. Also new:

True stories: Off Label (2012) takes on prescription drugs in America.

And if the Netflix reboot has you feeling nostalgic, Hulu has the original 1960s campfest Lost in Space: Complete Series with Guy Williams, June Lockhart, and Robot B-9.

The two-part documentary Elvis Presley: The Searcher (2018, not rated) explores the musical evolution of Elvis throughout his career.

Available Saturday night is War for the Planet of the Apes (2017, PG-13), the third and ostensibly final entry in the franchise reboot.

The season two premiere of the acclaimed HBO original Westworld is Sunday night.

A teenage girl (Zoey Deutch) relives the same day over and over again in Before I Fall (2017, PG-13), a young adult drama twist on Groundhog Day.

Streaming TV: The Circus: Season 3 continues to look at the inner workings of politics in America. New episodes arrive each Monday night.

TCM Select pick of the week is Howard Hawks’ hardboiled classic The Big Sleep (1946) starring Humphrey Bogart as the screen’s smoothest Philip Marlowe and Lauren Bacall as his match as the spoiled socialite daughter of his client. The snappy script and witty dialogue, written by esteemed American author William Faulkner and screenwriting greats Leigh Brackett and Jules Furthmann, is rife with sexual metaphors and cutting bon mots and the convoluted mystery serves as a backdrop for a charged romance and a contemplation of honor in the corrupt culture of L.A.’s underworld. Streaming through October 12

Director of the Week Vincent Minnelli is celebrated with a collection of 25 films, from his debut Cabin in the Sky (1943) and iconic Americana musicals Meet Me in St. Louis (1944) and The Bandwagon (1953) to his later melodramas Some Came Running (1958) and Two Weeks in Another Town (1962) (reviewed on Stream On Demand here). One glorious highlight is his Hollywood drama The Bad and the Beautiful (1952), a loving yet barbed tribute to the dream factory with Kirk Douglas and Lana Turner.

The twelve films with Star of the Week Charles Laughton include his Oscar-winning performances in The Private Life of Henry VIII (1933) and Mutiny on the Bounty (1935), the European crime drama rarity The Man on the Eiffel Tower (1950) featuring Laughton as Inspector Maigret, and Otto Preminger’s political drama Advise and Consent (1962) with Laughton’s final performance.