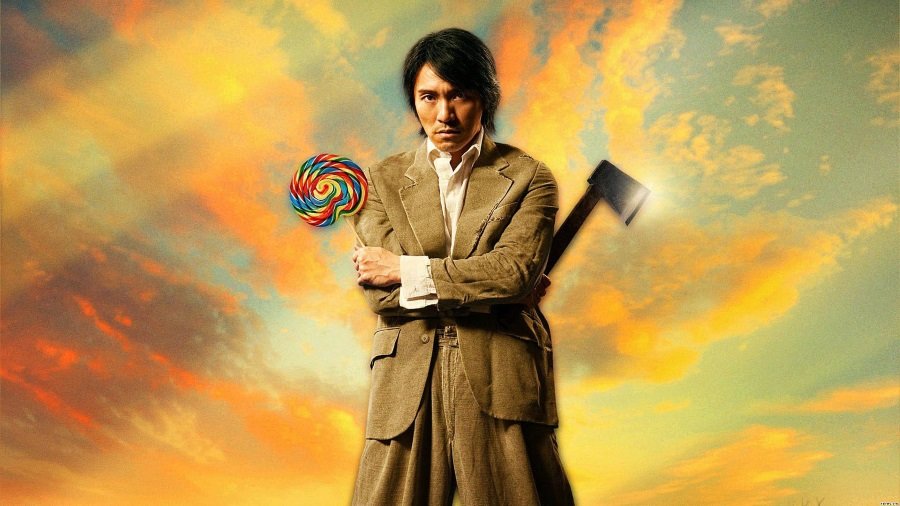 Stephen Chow was a superstar in Asia for his trademark mix of martial arts action and goofy, over-the-top comedy, but his movies never managed to find traction in the U.S. Until Kung Fu Hustle (Hong Kong, 2005), that is. This go-for-broke goof on classic Chinese warrior dramas and revenge thrillers packs a lot of action, a crazed cascade of comedy, a parade of characters, and a non-stop barrage of loving jabs at classic martial arts adventures into 99 minutes.

There’s a little bit of everything here: a band of hatchet-wielding gangsters who (quite literally) dance their way to the top in tuxes and top-hats; an impoverished slum where (by sheer coincidence) the greatest fighters of the land are all hiding out incognito; oddball villains with supernatural weapons; and a dim beggar named Sing (Chow) whose modest goal in life is to become a bully, if he can just find someone puny enough to beat up.

Chow is amazingly generous as a director and a writer, giving the most memorable moments of the first half of the film to other members of the cast—notably the skinny swivel-hip slumlord (Yuen Wah) and his brassy windbag wife (Yuen Qiu)—while the over-the-top ending belongs to him.

It’s not so much a story as a series of grudge matches and Chow pares the exposition down to a few melodramatic flourishes and silly clichés that he parodies with gusto. Chow has a fondness for cartoon effects, as a zippy roadrunner-esque chase scene (complete with whirls of motion in place of feet) attests, and Yuen Woo-ping choreographs with the same cartoonish overkill.

It feels like the film is tripping from scene to scene, rushing to keep up with the energy and momentum that outpaces the slim story, but in a film all about the spectacle and eye-popping set-pieces, that has its own rewards.

Also on Blu-ray and DVD and on SVOD through Amazon Video, iTunes, GooglePlay, Vudu and/or other services. Availability may vary by service.
Kung Fu Hustle [Blu-ray]
Kung Fu Hustle [DVD]

The Blu-ray and DVD releases feature commentary by director/star Stephen Chow and the cast, a featurette, deleted scenes, outtakes and bloopers, and an interview with Stephen Chow conducted by Ric Meyers.