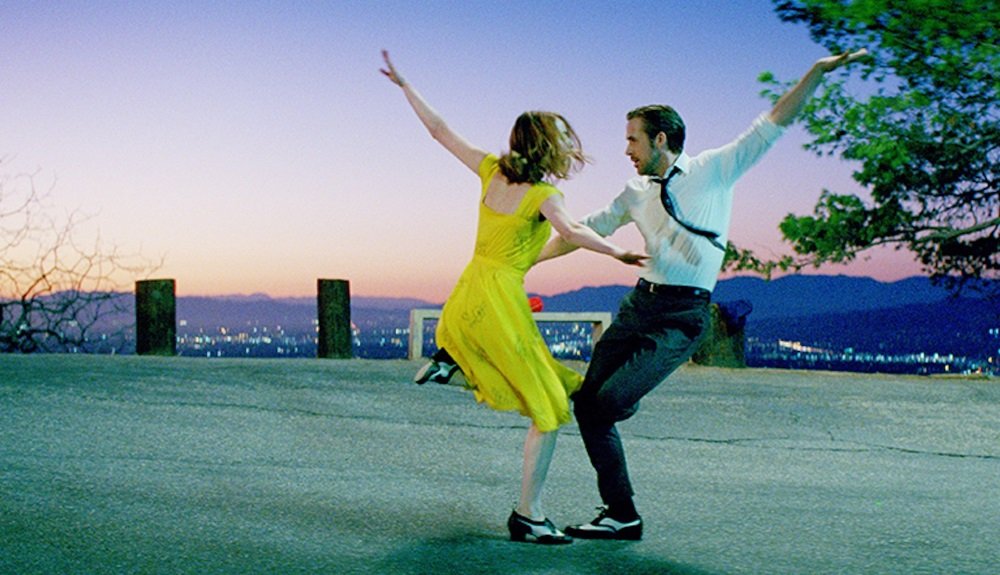 Old school Hollywood music and romance is brought into the 21st century in La La Land (2016), which earned a record-tying 14 Academy Award nominations and won six (losing Best Picture to Moonlight in what will surely remain the most famous Oscar night mix-up ever). Hollywood loves movies that celebrate show business and La La Land does just that, both in its story of aspiring artists in love and in its embrace of the old-fashioned musical form with modern indie movie spirit.

It’s a bright, energetic, buzzy blast of show biz dreams and romantic fantasy, a classic story with a pair of beautiful and charismatic young stars—Ryan Gosling as sardonic jazzman Seb, playing piano bars and preaching the gospel of jazz to anyone who will listen, and Emma Stone as spunky aspiring actress Mia, working the movie studio coffee shop between auditions—who meet cute, clash instantly, and dance their way to romance during a walk through the Hollywood Hills. John Legend co-stars as a contemporary R&B artist trying to woo Seb to his band (Seb simply isn’t into that brand of music but director Damien Chazelle seems to love it and makes no attempt to dismiss those audience-pleasing songs) and J.K. Simmons, star of Chazelle’s previous film Whiplash, has a terrific bit as a club manager who has had enough of Seb’s jazz showboating.

La La Land leapt into theaters with glowing reviews and breathless word of mouth and, inevitable blacklash from contrarians and curmudgeons aside, it charmed audiences sated on superhero movies and heavy awards-season dramas.

Chazelle channels his affection for classic musicals in delightful set pieces that embrace the Hollywood artifice: the primary colors worn by Stone and her roommates as a walk down the street falls into synchronized steps; the pools of colored light that transform a park at night into a dreamy outdoor ballroom; the opening number where the frustrations of an LA freeway jam bursts into a giant ensemble number where every driver jumps into the production and a swooping camera adds to the exhilaration. Even as the beautiful young dreamers keep getting doors shut on their fantasies, Chazelle paints their world in the colors of optimism: Los Angeles as the city of possibilities. Where else does a private dance in a venerable movie location soar into a turn among the stars?

It’s a lightweight story with a bittersweet twist and a wholesome delivery. This may be the modern world but the attitude is classic Hollywood confection and Chazelle deftly balances the two. As for those who complain about that the music and dance numbers don’t measure up to the bar set by Gene Kelly, Judy Garland, and Astaire and Rogers, I don’t disagree, though that is an awfully high bar to reach in a film culture that neither nurtures nor celebrates such vitrues.

Oscar win aside, there’s nothing particularly noteworthy about the score; the songs by Justin Hurwitz and Chazelle are fine but lack the lyrical wit and musical grace of the show tune greats. Stone and Gosling are game singers who make up in spirit what their voices lack in tone and nuance, and they are even better dancers, but mostly they have the charge of youth and enthusiasm and a chemistry that bubbles through every scene. They are fun to watch and easy to like and when they break into a musical number they seem to radiate joy from the screen. And really, isn’t that what we love about classic musicals?

On Blu-ray, 4K UltraHD, and DVD from Lionsgate Home Video and on SVOD through Amazon Video

On Blu-ray, 4K UltraHD, and DVD from Lionsgate Home Video. This is bright, visually and aurally vibrant film and the Blu-ray looks and sounds terrific. All edition feature filmmaker commentary from writer/director Damien Chazelle and composer Justin Hurwitz and three featurettes: “Another Day of Sun: They Closed Down a Freeway” (11 minutes), which looks at the film’s memorable opening musical number, “La La Land‘s Love Letter To Los Angeles” (7 mins), and “Ryan and Emma: Third Time’s the Charm” (6 mins). And there is a quick jump function (“Song Selection”) to jump to the songs or simply run the musical sequences back to back.