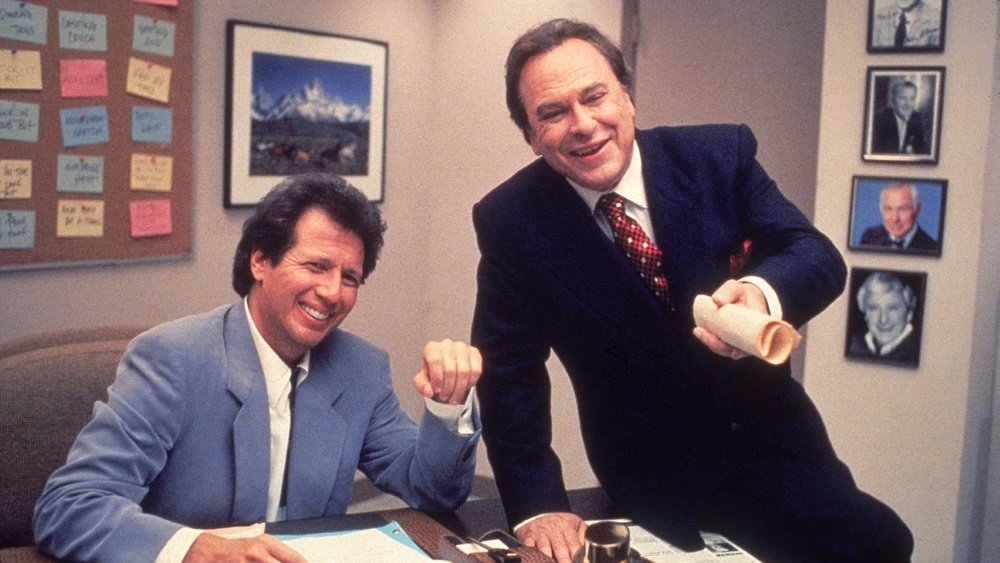 Hey now! The Larry Sanders Show was the original buzz show on HBO. A scathingly funny sitcom created by and starring Garry Shandling, it ran on the channel’s late-night schedule between 1992 and 1998, receiving fair ratings, great reviews and a rabid following in Hollywood as it became the industry’s cult show.

Shandling had previously deconstructed America’s other favorite TV genre with his “stand-up sitcom” It’s Garry Shandling’s Show, a much gentler program that spoofed sitcom conventions as it acknowledged the studio audience, the TV cameras, and the space between the sets as Shandling narrated his way from one scene to the next. The self-reflexive quality of The Larry Sanders Show was of a different nature, bouncing between the drama behind the scenes (shot on film) and the “show” itself (shot on video in traditional TV talk show style), but it wasn’t about acknowledging the conventions so much as deconstructing the business. Shandling plays talk host Larry Sanders, the reflexively glib and eternally insecure late-night veteran on a fictional show in the exaggerated world of the cutthroat Los Angeles entertainment industry. It’s all about insecurities, egos, vanity, and other show-biz ailments and Shandling (who writes or co-writes practically every episode) is ruthless with his characters’ ambitions and fragile self-images. That caustic comedy attracted an astounding array of guest stars (from Carol Burnett to Adam Sandler to Robin Williams to three brilliant appearances by David Duchovny and Jim Carrey in the finale), all happy to send up themselves and their image in increasingly clever appearances.

While Shandling is unquestionably the star of the show(s), the ensemble makes the series click, especially Jeffrey Tambour’s sharp-as-a-sponge sidekick Hank (perfectly played with blowhard vanity and oblivious babbling) and Rip Torn’s smiling wolf of a producer Artie: loyal, fiercely protective, a veteran schmoozer quick to smile and quicker to toss off an epithet-laden insult. (He earned a well-deserved Emmy for his portrayal, one of the show’s rare wins despite 56 nominations; it was an era before cable shows were treated with the same respect as network series.) The show also helped launch/further the careers of cast members Penny Johnson, Jeremy Piven, Janeane Garofalo, Sarah Silverman and Mary Lynn Rajskub, and in later seasons brought in Bob Odenkirk as Larry’s new agent (modeled on the real-life Ari Emanuel, also the model for Piven’s character on Entourage) and “Kid in the Hall” Scott Thompson as the gay assistant to homophobic Hank. The writing staff included Peter Tolan (co-creator of Rescue Me) and Judd Apatow. Smart, sharp, cutting, cynical, and buoyed by just enough sensitivity and sincerity and genuine kindness to keep you with the characters, it’s the best comedy ever made about show business and one of the funniest shows ever shown on America TV (yes, yes, I know, it’s not TV, it’s HBO).

It’s also decidedly adult in its language and material.

89 half-hour episodes, every one of them worth watching. Watch it on HBO Now and HBO Go. No flipping!