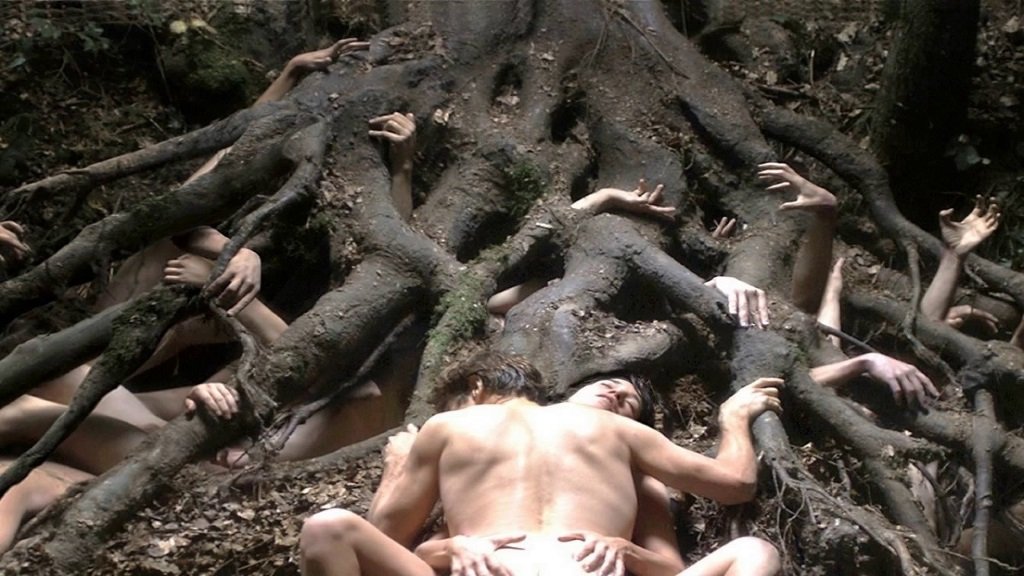 I’m not sure how I manage to keep my simultaneous fascination with /repulsion for Lars von Trier in balance, but it’s there with a vengeance in Antichrist (Denmark, 2009), another provocation that is at once beautiful and perverse, personal and cynical, and filled with his sour vision of the emotional small-mindedness (small-heartedness?) of the human animal.

This one, a portrait of marriage as a morass of anger, suspicion and power after She (Charlotte Gainsbourg) falls into a pit of suicidal depression and He (Willem Dafoe), a psychiatrist, takes personal charge of her treatment in a rural escape called Eden that von Trier twists into a diseased hell: paradise rotted. It all turns on the death of their infant child, a creepily unreal figure that crawls through an open window and falls to its death while the parents are occupied in a slow-motion ballet of aggressive, feral sex.

Anthony Dod Mantle is back behind the camera delivering Von Trier’s now familiar art-house look of carefully composed and stunningly sculpted establishing shots and framing sequences (like the B&W prelude of sex and death in the whisper of falling snow) while handheld photography takes us through the cover art frame and into their psychodrama.

Yeah, von Trier is nothing if not provocative and he throws it all at us here: a coldly controlling husband who can’t seem to draw a line between treatment and experimental psychotherapy, a fragile wife who slips into darkness and latches onto his projections of her “cruelty” to embrace her inherent “evil,” a natural world mutated into an animated Bosch painting. He is most comfortable when in control and passing judgment and she rebels by becoming the very force of evil that men have accused women of being (as witches and temptresses and demons) for centuries. I confess, I’m fascinated by von Trier’s work even I rebel against his misanthropic vision of mankind and human relationships, and this film cuts through middle between appreciation and repulsion. It’s compelling and provocative and crazy-making.

Not rated, features nudity, sexuality, explicit violence, and extreme and disturbing imagery. Just another cheery von Trier romp through the dark side.

, iTunes, GooglePlay and/or other services. Availability may vary by service.
Antichrist (The Criterion Collection) [Blu-ray]

The Criterion DVD and Blu-ray release features commentary by von Trier and professor Murray Smith, who engages him to explain and explore his approach and intentions (who talks mostly about the physical aspects of production), plus video interviews with von Trier and actors Willem Dafoe and Charlotte Gainsbourg, seven short production featurettes, a featurette on the Cannes premiere and press conference footage, plus a booklet.