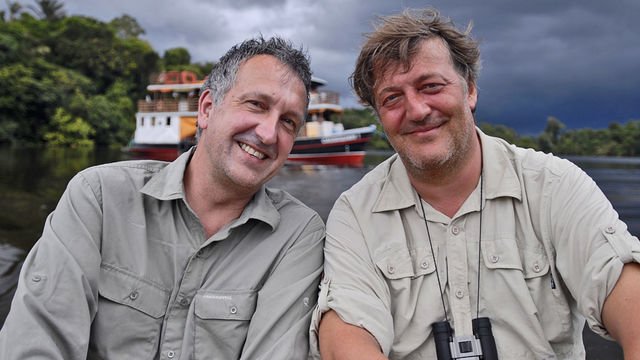 Last Chance to See (2009) – In the late 1980s, Hitchhiker’s Guide to the Galaxy author Douglas Adams took a year off to travel the globe with zoologist Mark Carwardine to search out some of the most endangered species on Earth, a project he turned into a non-fiction radio series and book to promote awareness and activism to save threatened species.

Twenty years after that trip, author/actor/British comedy legend Stephen Fry, a close friend of the late Adams (who died in 2001), joined Carwardine to revisit the same endangered species and see what had become of them in the ensuing decades for a BBC series. What they discover is that the creatures that they search for (among them the Amazonian Manatee, the Northern White Rhino and the Komodo Dragon) are becoming increasingly rare in the wild, in some cases saved from extinction only by aggressive intervention.

“The greatest mass extinction the world has ever seen is happening right now,” Fry warns the viewers. “Human activity is causing it and human activity alone can put it right.” But for all the bad news, the well-produced series emphasizes the efforts being made to save the rare creatures. Fry is an engaging, witty and articulate host and narrator and Carwardine is almost as funny as his tour guide in this entertaining but sobering mix of nature documentary and adventure travel series. This plea for ecological conservation and conservatorship makes a fine companion to the brilliant natural history shows Life and Planet Earth and it brings a personal touch and a human connection to this vital ecological issue.

Six episodes. Queue it up!