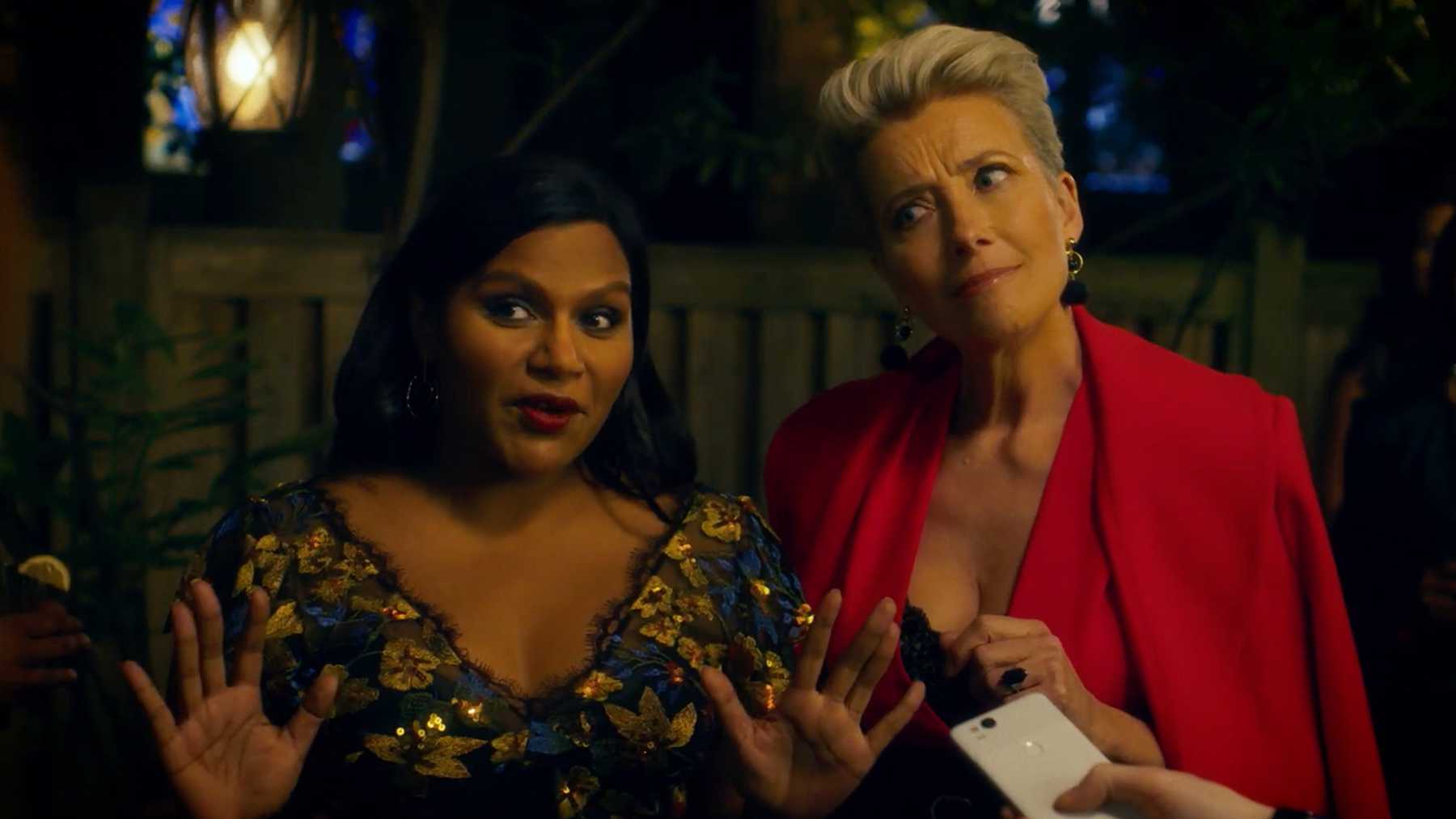 Here’s what’s new and ready to stream now on Netflix, Amazon Prime, Hulu, HBO Now, video-on-demand, and other streaming services … The weekly column is featured in The Seattle Times, The Oregonian, The Spokesman-Review, and other newspapers.

Emma Thompson plays a TV talk show veteran with a prickly personality and falling ratings in “Late Night” (2019, R), written by Mindy Kaling who costars as a neophyte comedy writer on the show’s all-male writing staff. The comedy’s take on sexism, ageism, and women’s experiences in the workplace isn’t as sharp as it could be but it is funny thanks to the stars, especially Thompson’s crisply acerbic performance as a comedian who has lost touch with what inspired her initial success. Now streaming on Amazon Prime Video before VOD and DVD.

Emmy-winning actors Toni Collette and Merritt Wever play police detectives on the trail of an elusive serial rapist in “Unbelievable,” a Netflix Original limited series based on a true story. Created and co-written by Susannah Grant (“Erin Brockovich”) with Michael Chabon, the drama focuses on how system fails one tormented young victim (“Booksmart” star Kaitlyn Dever) as well as on the small details of real detective work.

It is ” one of the best crime dramas in recent memory and one of the best shows of 2019,” writes TV critic Jen Chaney for Vulture. “[T]he mystery element is secondary and beside the point. Unbelievable is not about finding the bad guy so much as it about the value of genuinely hearing and understanding the victims.” Eight episodes streaming on Netflix.

The Amazon Original series “Undone” uses rotoscope animation (which essentially draws over live action footage) to create a slightly surreal, off-kilter reality for a story that is part psychodrama and part time travel thriller. Rosa Salazar stars an aimless young woman who starts having visions of her dead father (Bob Odenkirk) after a car accident. From Raphael Bob-Waksberg and Kate Purdy, the creators of “BoJack Horseman.” Eight episodes on Amazon Prime Video.

The five-part true crime documentary series “Murder in the Bayou” (2019, TV-MA), about the unsolved murders of eight women over four years in Jennings, Louisiana, puts the focus on the victims and the culture of their town. New episodes each Friday on all Showtime platforms.

Free pick: “Ex Machina” (2015, R) is science fiction as chamber drama, a clever game of wiles between a socially naïve programmer (Domhnall Gleeson), a sophisticated artificial intelligence (Alicia Vikander), and a manipulative software genius (Oscar Isaac). It won an Oscar for its quietly impressive special effects. Streams on Hoopla, which is available through most public library systems.

“John Wick: Chapter 3 – Parabellum” (2019, R) expands the assassin universe once more as the titular hit man (played by Keanu Reeves) takes on hundreds of professional killers in what seems like a non-stop action spectacle.

All three on VOD, Cable On Demand, and DVD, and at Redbox.

Also new: thriller “Strange But True” (2019, PG-13), based on the novel by John Searles and starring Amy Ryan and Greg Kinnear;

“The Mind, Explained” uses animation to explore and explain the science behind dreams, memory, anxiety, and mindfulness. Emma Stone narrates the documentary series.

Ava Michelle is the “Tall Girl” (2019, not rated) in the high school romantic comedy debuting directly to Netflix.

International TV: a horror author (Victoire Du Bois) who keeps her nightmares at bay through her stories finds them coming to life when she takes a break from writing in “Marianne: Season 1” (France, with subtitles). Also new:

Dev Patel and Armie Hammer star in “Hotel Mumbai” (2019, R), which dramatizes the real-life 2008 terrorist attack on the Taj Hotel in Mumbai, India.

Josh Hamilton, Eric Stoltz, and Parker Posey are college graduates unable to move on in the comedy “Kicking and Screaming” (1995, R), the directorial debut of Noah Baumbach.

Saoirse Ronan is “Mary Queen of Scots” (2018, R) in the historical drama costarring Margot Robbie as Queen Elizabeth II. It earned Oscar nominations for costume design and make-up and hair.

The third and final season of The Deuce” (TV-MA), David Simon’s drama about crime, pornography, and the transformation of urban New York in the 1970s, jumps ahead to 1985 and the era of video and AIDS. Maggie Gyllenhaal and James Franco star. New episodes each Monday.

All nine episodes of nonfiction series “Couples Therapy: Season 1” are available to stream on Showtime Anytime and Showtime On Demand. Seattle writer and advice columnist Dan Savage is a consulting producer on the show.

The four-part BBC miniseries “The Victim” (2019, not rated), starring Kelly Macdonald as a bereaved mother seeking justice for her murdered son 14 years after his death, makes its stateside debut on BritBox.

The eight films in the “Jailbreak!” spotlight on The Criterion Channel include the Criterion debuts of “Stalag 17” (1953), Billy Wilder’s barbed POW drama with William Holden, and Jacques Becker’s brilliant prison drama “Le Trou” (France, 1960, with subtitles).

Also new on Criterion is the documentary “David Lynch: The Art Life” (2016, not rated), which focuses on his painting, and a double feature celebrating iconoclastic British stage director Joan Littlewood: World War I musical satire “Oh! What a Lovely War” (1960, G), adapted from her experimental stage production, and “Sparrows Can’t Sing“(1963, not rated), her only directorial feature.

Emma Thompson is superb as a judge facing a conflict between the professional and personal in “The Children Act” (2018, R), a powerful drama adapted by Ian McEwan from his novel. It’s new to Hoopla along with:

The new family sitcom “Mr. Mom” (TV-PG), based on the 1983 Michael Keaton comedy, is the first original series from video-on-demand service Vudu. Hayes MacArthur takes the Keaton role of the hapless househusband and Andrea Anders plays the career mom suddenly facing the modern workplace culture. You can watch the first episode for free.

Starz debuts the award-winning documentary “Out of Omaha” (2018, not rated), which follows two young black men coming of age in Omaha, Nebraska, the same week it becomes available on VOD.