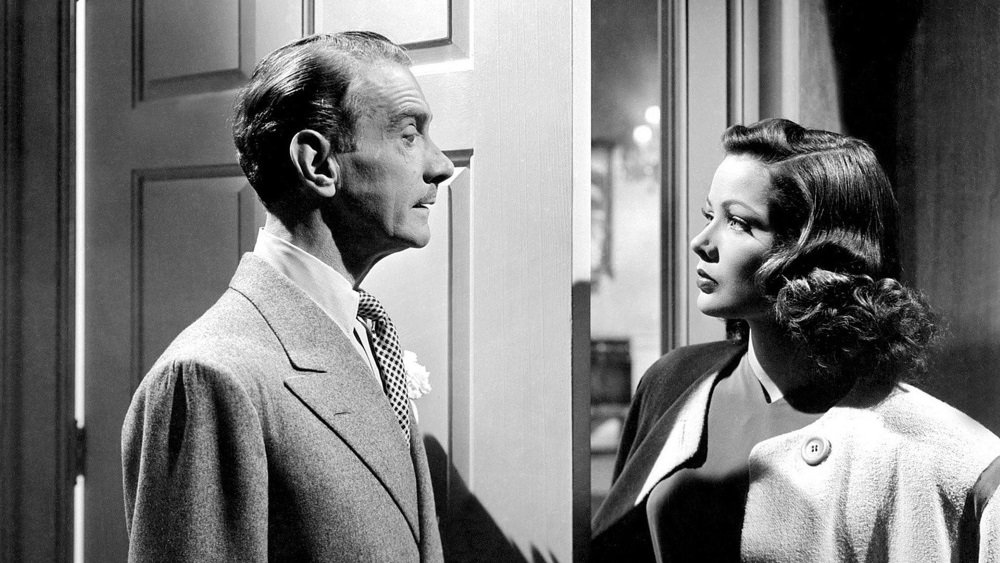 I’m a big fan of film noir, those shadowy, often hardboiled crime dramas a morally-tarnished urban world of the forties and fifties. Laura (1944) is elegance incarnate in a genre known for its hard edge, the sleekest, silkiest noir of all.

Gene Tierney is the cultured beauty whose murder investigation opens the film and Dana Andrews the gruff police detective, a romantic hiding under a hard-boiled hide. He falls in love with the beautiful murder victim through the portrait that hangs in her apartment. That she’s not actually is dead is just the first reversal in this superb film.

Handsomely shot in dreamy B&W, Laura is the first and best of Otto Preminger’s cool, controlled murder mysteries. We think of film noir as a style with hard shadows: lights through venetian blinds slicing up the screen, characters swallowed up in shadows to suggest the darkness within them, or doom on the way. This is softer than that, more atmospheric and romantic. The dark is really about mystery here: covering up the truth in shadow. It won an Academy Award for Joseph LaShelle’s photography.

Preminger moves the camera a lot in Laura but the tension comes from the contrast between the surface calm—the stillness—of the screen and the emotions and social gamesmanship under the surface. Preminger likes to keep a remove from the characters to observe and study them. He has a very cool-headed style, even in the most volatile scenes, and it give the film a terrific tension under the elegance.

Into this refined world comes Andrews’ detective, a street-smart mug who clomps through high society in his investigation, upsetting the unspoken rules of conduct by stating what everyone else talks around. Andrews is the inelegant element in a world of surface elegance, the fly in the ointment, so to speak, and he’s despised for throwing a light on the secrets in the shadows. Tierney is nothing if not elegant as Laura, the dream girl with as much talent as ambition. And Vincent Price delivers a superb performance as a smarmy, insincere, weak-willed society gigolo. He’s a man who is all manners and no backbone.

But it’s Waldo Lydecker, a character created for the film and played by Clifton Webb as a pompous, condescending aristocrat, who dominates whenever he’s onscreen. A newspaper columnist with a withering wit, he’s Laura’s mentor and he looks down on the blue collar clumsiness of the detective. Not because he threatens to arrest Laura but because he threatens to sully her with his love.

In the gritty world of film noir Laura remains the most refined and elegant example of the genre, but under the tasteful decor and high society fashions lies a world seething in jealousy, passion, blackmail, and murder.

The gorgeous cinematography by Joseph LaShelle won an Academy Award and it was nominated for four additional Oscars, including best director and actor for Clifton Webb.

The Blu-ray and DVD releases feature two commentary tracks (one by composer David Raksin and film professor Jeanine Basinger, the other by film historian Rudy Behlmer), episodes of the A&E “Biography” series on Vincent Prince and Gene Tierney, the featurette “The Obsession” on the legacy of the film, a deleted scene, and an option to watch the “extended” version of the film with the deleted scene restored.