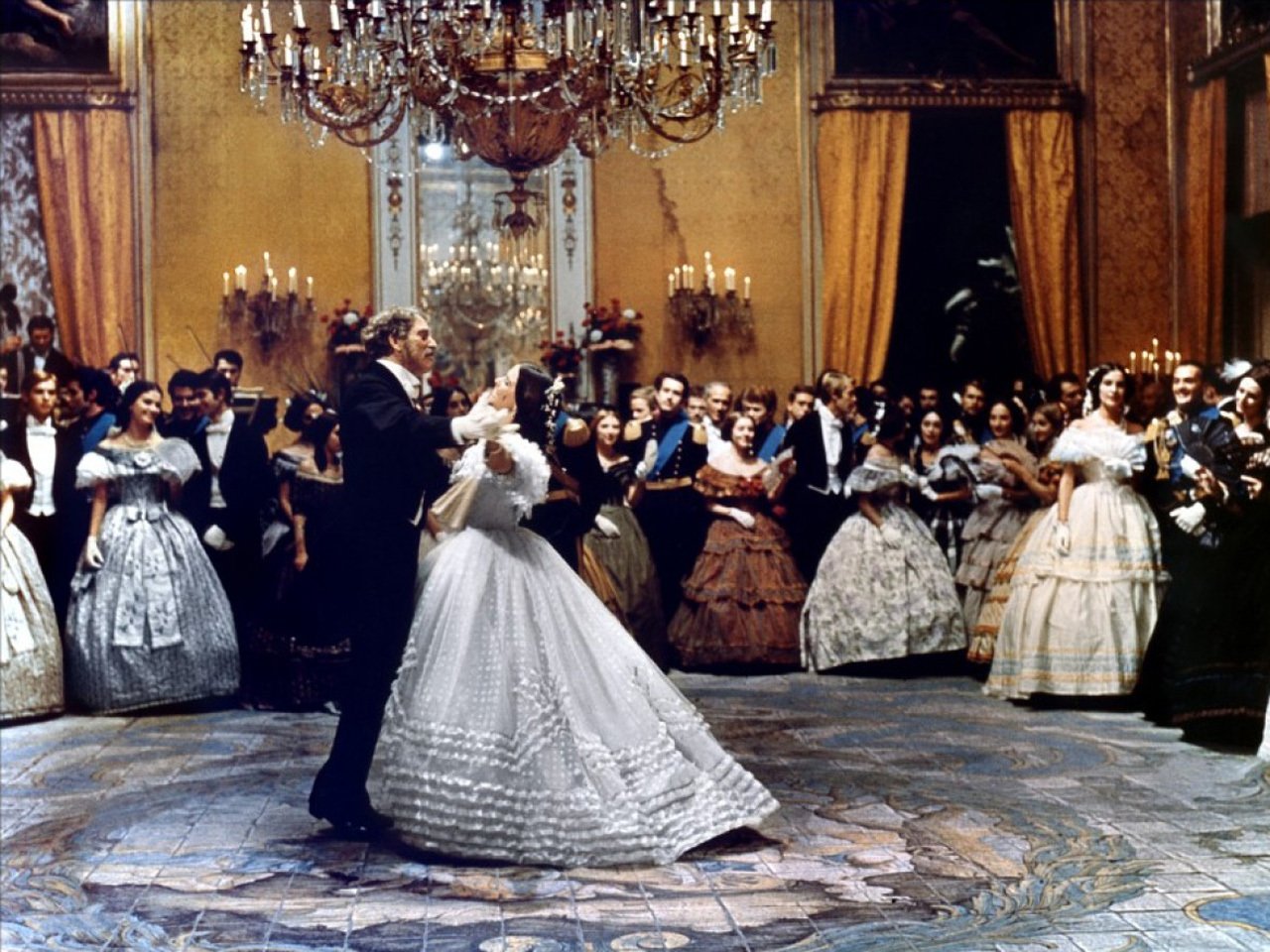 The Leopard (Italy, 1963), Luchino Visconti’s adaptation of Giuseppe di Lampedusa’s novel (said to be a national touchstone for Italy), is his masterpiece. Burt Lancaster (his voice is dubbed by a deep-voiced Italian) may seem an unusual choice to play Prince Don Fabrizio Salina, an idealistic 19th century Sicilian prince (Visconti favored Laurence Olivier, a much more conventionally regal choice), but his confidence, his gravitas, and his understated cat-like grace as he walks through the world as if he owned it, creates a character of great authority and even greater melancholy.

With the impoverished island nation of Sicily on the verge of revolutionary change and reform, Salina places his hope in a democracy to wipe away the corrupt ruling aristocracy (of which he is himself a member) and in his upstart nephew Tancredi Falconeri (Alain Delon), who fights for a unified Italy with Garibaldi’s Red Shirts. “For things to remain the same, everything must change,” proclaims Tancredi as he sets off to join the revolution. Salina is publicly against the war but privately sympathetic and he sees Tancredi as the future of this country, or at least of his family, which is mired in a sinkhole of decadence and irrelevance.

Lancaster’s Salina is both above the world and within it. He takes his place as an authority figure in the aristocracy with dignity even as he mourns its inbred impotence, and nowhere more beautifully than the magnificent finale. The farsighted Salina has arranged for Tancredi’s future with a beneficial marriage to the beautiful (if raw) daughter of the gauche Don Calogero Sedara (Paolo Stoppa), a landowner buying his way into society and into political power. That his daughter, Angelica, is played by Claudia Cardinale as an earthy beauty with crude manners as honest and direct as they are inappropriate to police society, only cinches the deal: two of the most beautiful people in international cinema circa 1963 bring on the marriage of class and power, old blood and new money. It couldn’t be more perfect.

Visconti’s unusual pedigree—a dedicated Communist raised (and at the time of his filmmaking still living) within the Italian aristocracy—gives his portraits of the high society (past and present) a unique sensibility. The richness of detail he brings to the human interactions and social currency creates a world that is completely believable and consistent enough to make any aberrations startlingly apparent. Meanwhile, his politics carry an inherent criticism of the very lifestyle he so painstakingly puts on display.

The society ball of the finale, the now-tutored Angelica’s official induction into society, is both metaphor and illustration of the failure of all of Salina’s hopes. Lancaster’s Prince wanders the landscape of power and society, aloof from it all until he waltzes with Angelica, giving his approval to her ascension while displaying the easy grace and unforced command of his position. But it’s a bittersweet moment; he once appreciated her earthy way, a fresh injection of candor and authenticity in a fossilized world, but now she too has been co-opted and Visconti’s elegant, gliding long takes through the amazing sets tells the same story on a purely visual level, a study in a world of empty surfaces and meaningless manners. You might say that the entire film is a dance to the music of time, but neither the music nor the steps change. They simply swap partners and continue dancing in their bubble of privilege.

It won the Palm d’or at Cannes and was nominated for an Oscar for its costume design.

Not rated, in Italian with English subtitles

Criterion Channel presents the film with supplements from the special edition disc release, including commentary, the documentary A Dying Breed: The Making of The Leopard, and the shorter American cut (with English language soundtrack). (See below for details)

, iTunes, GooglePlay and/or other services. Availability may vary by service.
The Leopard (The Criterion Collection) [Blu-ray]

The Leopard (The Criterion Collection) [DVD]

Film scholar Peter Cowie provides commentary and a second disc features the 161-minute American release supervised by Burt Lancaster (whose own voice can finally be heard), which is not merely shorter; the script translation softens the politics and social conflicts of the film. Also includes the hour-long documentary A Dying Breed: The Making of The Leopard, featuring interviews with Claudia Cardinale, screenwriter Suso Ceccho D’Amico, cinematographer Guiseppe Rotunno, and Sydney Pollack (who worked with Burt Lancaster on the American dub version) among others, plus video interviews with producer Goffredo Lombardo and Professor Millicent Marcus of the University of Pennsylvania (on the history behind The Leopard), a stills gallery, original trailers and newsreels and a booklet.