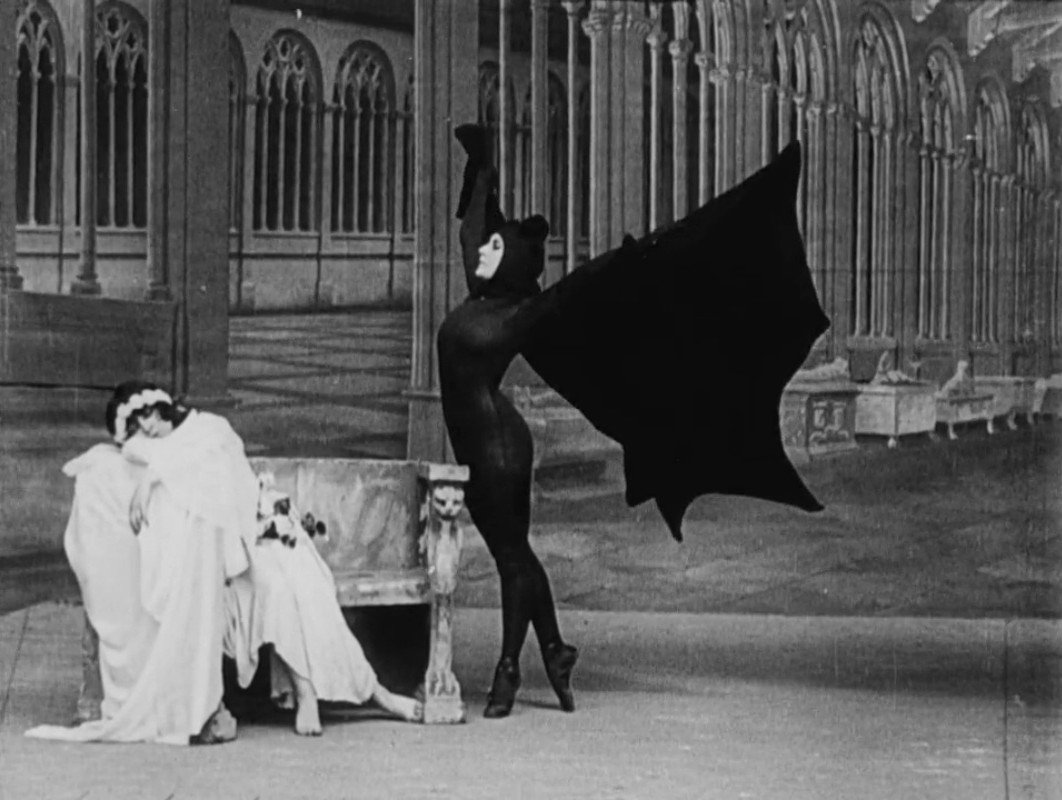 Les Vampires (France, 1915), Louis Feuillade’s mad serialized tale of a master criminal organization that robs, kidnaps, and murders their way through Parisian society, is a strange and wonderful masterpiece of early cinema.

The Vampires of the title are bloodsuckers only in the metaphorical sense. They’re a Masonic criminal conspiracy that intrepid reporter Philip Gueraude (Édouard Mathé) vows to expose. He outlives a succession of Vampire Grand Masters but the grand dame of all femmes fatales, the slinky, sinister Irma Vep (French icon Musidora in a body stocking and black mask), eludes him.

It’s easy to see why the surrealists embraced Feuillade’s surreal thriller. Spiced with sudden revelations and unexpected humor, the pulp plots of his episodic adventure are less mystery than chaotic thriller where nothing is as it seems and anything goes. When Philip discover and opens the hidden compartment above his bed, his pride turns to shock when he finds a severed head inside. And that’s just the beginning of this heady mix of secret passages, poison pen letters (with real poison pens!), disappearing bodies, and disguises galore.

While D.W. Griffith was changing the face of American cinema with his editing, Feuillade took a different approach. He emphasized tableaux scenes played out in single takes, with little camera movement (apart from mounting it in cars during escapes and chase scenes) or edits within scenes—there are few close-ups and almost no crosscutting here—yet he gives the film a dynamic energy with his compositions and choreography and inventive imagery. The energy is created through staging, character movement, and surprise revelations, directing the audience’s attention within the frame and setting the rhythm of the film through its internal movement. The style makes the film even madder: you can’t take anything at face value. Watching the well-ordered world turn upside down in a single shot makes the reveal so much more surprising.

Shot in the chaos of 1914 France as the first World War raged on the border, Feuillaude directed the film on the run, often improvising and repeatedly killing off characters as performers were called to war. The resulting narrative doesn’t always make logical sense, but that’s part of the delight— “The Vampires” seem all the more deadly for their unpredictability and obscure intentions. More than any other Feuillade production I’ve seen, Les Vampires follows a dream logic that creates its own crazy, magnificent fantasy world.

Black and white with tints, silent with music score

Also on Blu-ray and DVD and on SVOD through Amazon Video, iTunes, GooglePlay, Vudu and/or other services. Availability may vary by service.
Les Vampires [Blu-ray]
Les Vampires [DVD]

The complete ten-episode / seven-hour serial is mastered in high definition from the 1996 Cinémateque Français restoration for the Kino Blu-ray and DVD. Tints are used sparingly over the predominantly black and white presentation. It features new English intertitles and a very good score compiled and performed by the five-piece Mont Alto Motion Picture Orchestra. There are no supplements beyond a trailer.