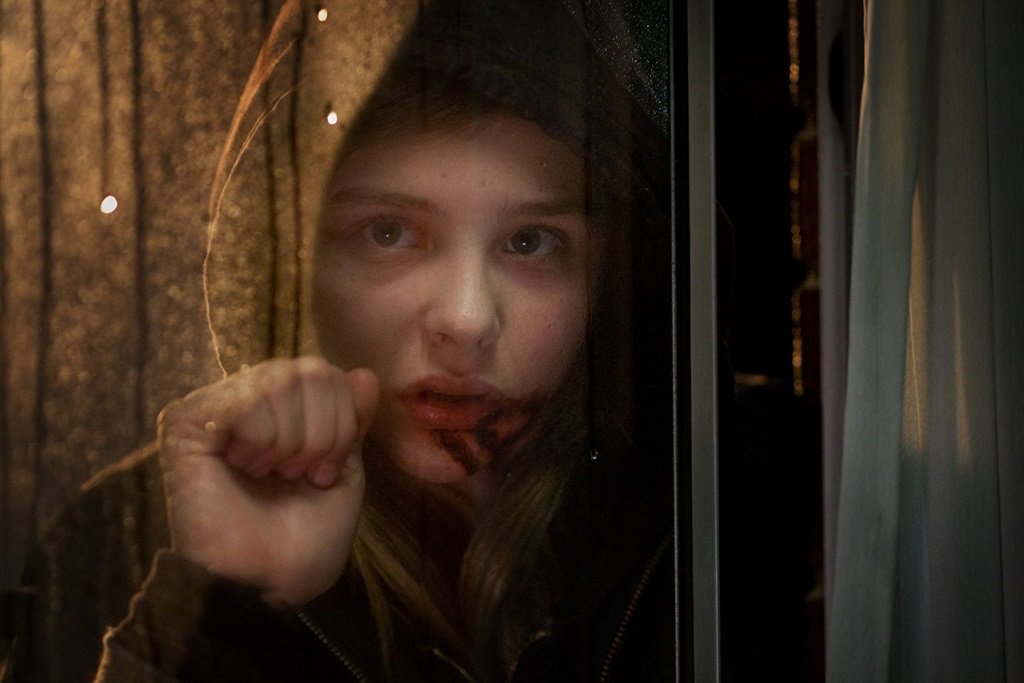 Let Me In (2010), a remake of Let the Right One In, the Swedish coming-of-age horror movie-turned-adolescent survival drama in the wilds of suburban civilization, is as unexpected as can be: an American revision of a celebrated European film that honors the original while translating its anxiety and unease to a distinctly American setting.

If anything, it deepens the emotional power of the original. It’s an American movie that feels European in its quiet, piercing observations and its willingness to show the isolation of loneliness and anxiety and the desire for emotional contact in two children.

Moved from the suburbs of Stockholm to Los Alamos, New Mexico, in the depths of winter in the last gasps of the Cold War under Reagan’s presidency, it follows the story of a bullied young boy (Kodi Smit-McPhee, heartbreakingly lonely) left to drift in his own isolation as his parents withdraw in divorce. That’s when he meets an odd, eerily confident girl (Chloë Grace Moretz) who only comes out at night and endures the snow and the chill in bare feet and summer dresses. Yes, she’s a vampire who feeds off the blood harvested by her guardian (Richard Jenkins, a hollow man with failing skills so deadened by his work that slavish devotion alone drives him). And she’s a twelve-year-old girl (“I’ve been twelve for a very long time”) who has just found a friend in a devoted boy who has been abandoned by the rest of the world.

In many ways, Matt Reeves’ vision is both more feral and more vulnerable than the Swedish original: angel-faced monster Abby is not heartless, merely a predator out to survive (the echoes of animal kingdom rules resonate throughout, especially when she lures a victim by playing the wounded animal), while the Smit-McPhee’s disconnected Owen escapes into serial killer fantasies (is the only way he can imagine strength and control by being even more violent and predatory than the bullies who torment him?). It’s the kind of sour streak in an otherwise sweet kid that makes this film so rich and human, and their devotion is as genuine as it is inevitably tragic. Just as the title resonates with so many aspects of their lives: it’s a request, a demand, a reference to vampire lore (a vampire cannot enter a home without being invited and we get a terrible peak at what happens when protocol is ignored) and a quiet cry for emotional connection.

The haunting atmosphere of stillness and silence is as formidable as its dark, wintry setting and the icy chill cuts to the bone and to the heart. Under the hush of snow glowing softly under the hazy streetlamps is a jumble of primal emotional drives—to live, to feed, to connect, to survive, to sacrifice oneself heart and soul (and blood)—that erupt with a terrible and beautiful ferocity that Reeves courageously suggests more than he illustrates.

Apparently American audiences at the time prefered their vampires to sparkle rather than sate themselves, but this masterful film has more heart and blood (pounding and spilling) than any of the bloodless Twilight movies.

, iTunes, GooglePlay and/or other services. Availability may vary by service.
Let Me In [Blu-ray]

The Blu-ray and DVD from Anchor Bay with an excellent commentary track with filmmaker Matt Reeves, who focuses on the characters and their stories and journeys as he addresses the original novel and film, the issues of adaptation and the process of working with the actors. This is what I want to hear in a director’s track: how and why he put the words, performances and images together in this way to tell this story. For production details, go to “From the Inside: A Look at the Making of Let Me In,” a conventional but well-made 17-minute featurette that covers all aspects of the production. There’s more on the visual effects in “The Art of Special Effects” (6 minutes), which essentially (and effectively) deconstructs a few key scenes, and “Car Crash Sequence Step By Step” (6 minutes), which is exactly what it sounds like. Three deleted scenes (running just over 2 minutes), with optional director commentary, complete the set.

Exclusive to the Blu-ray is “Step-By-Step: Dissecting Let Me In,” a picture-in-picture track drawn largely form the featurettes that is too spotty to be really effective; even with storyboards to a few select sequences, this mode goes silent for long periods. Also features a bonus digital copy.