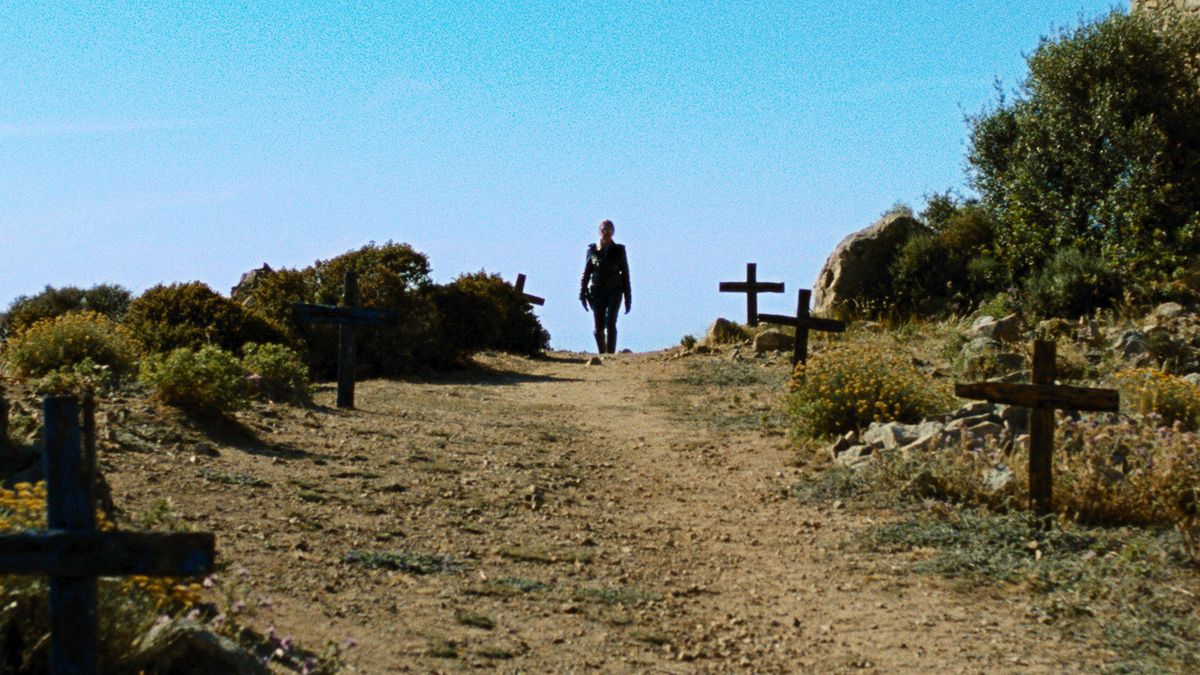 The Belgian filmmaking team of Hélène Cattet and Bruno Forzani are carving a distinctive and specialized career melding stylized art movies with flamboyant genre pictures drawn from expressive techniques of Italian exploitation movies. With Let the Corpses Tan (Belgium/France, 2018), their third feature, they turn an adaptation of a cult pulp novel by Jean-Patrick Manchette and Jean-Pierre Bastid into a tribute to the poliziotteschi (the violent Italian cop and gangster movies of the seventies) with flourishes from spaghetti westerns, Italian horror films, and even Japanese pop-art spy and crime movies.

A violent gang robs an armored car and hides out in the ruins of a mountain villa on the Mediterranean occupied by an eccentric artist (Elina Löwensohn), a burned-out novelist (Marc Barbe), and a scheming lawyer. The police stumble across their hideout and the shooting begins, igniting a violent siege that soon sets them against one another as well as they figure out there’s a double cross in the making. In the best tradition of the heist gone wrong genre, this mix of crooks is combustible and just waiting for a spark to set them off.

The whole thing has the quality of a dream, complete with surreal digressions (the getaway is briefly interrupted to pick up two women and a child on the road) and lurid visions that haunt multiple members of the gang. The directors shoot much of it in extreme close-up and edit in startling smash-cuts, creating a sense of abstraction and dislocation as they slowly reveal the big picture, like a puzzle slowly pieced together from pop-art images. Time stamps on the screen play like chapter titles that signal jumps forward and, at times, backward in time as we rewind for alternate perspectives on the same scene. The score is drawn from classic Italian genre soundtracks by Ennio Morricone and others, a magpie musical backdrop to a soundscape as stylized as the imagery.

You might say this is more like the idea of a brutal crime thriller produced as a stylized tribute than an organic piece of pulp fiction. The intertwining storylines, colliding schemes, and volatile characters are stirred into a kind of organized chaos that can be hard to follow as a story (all that fragmented imagery makes it hard to know where you are at any given time). But I found it a blast to watch: a lovingly crafted piece of cinematic invention with riveting immediacy and stylistic excitement, with all the doom of the Italian crime genre and a dash of benevolence for the innocents caught up in the middle of the scheming criminals.