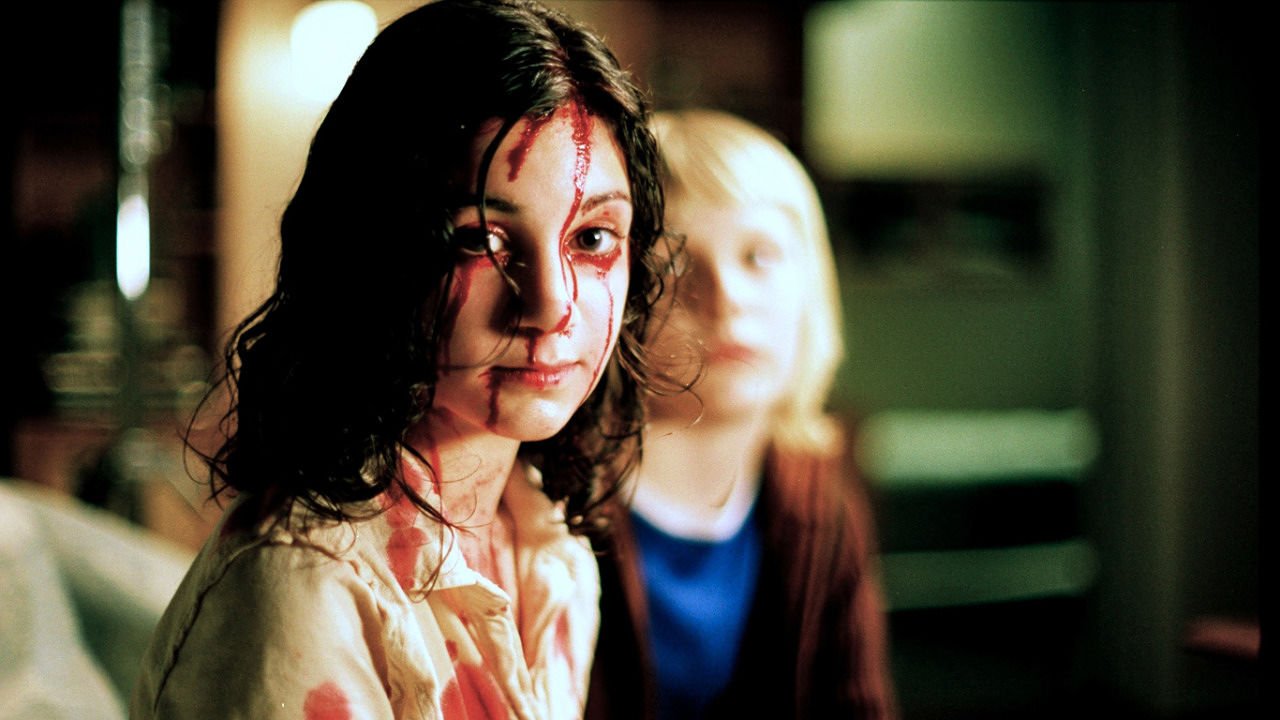 Tomas Alfredson’s Swedish vampire film / young love horror piece Let the Right One In (2008) is grounded in a devoted friendship that bonds two outcasts in a predatory world.

Bullied schoolboy Oskar (Kare Hedebrant), a loner so blond he looks albino, meets twelve-year-old Eli (Lina Leandersson), a fellow loner hanging around the snow-covered playground of his Stockholm suburb in short sleeves, unfazed by the frozen night. “I’ve been twelve a long time,” she later confesses to Oskar, who understands that there’s something different about this girl who only comes out after dark. Which makes Sweden a great place for her: It’s night most of the winter, and the cold is no concern to a creature that doesn’t feel anything.

Shot with a cool stillness that has a tendency to freeze the imagery, this is a film of evocative moods and twisted allegiances: we can’t justify the killing of these victims (although I did get some satisfaction out of the bullies getting theirs as they torture Oskar in the final scene), but we like this girl, we appreciate their friendship, we root for her to protect this tormented boy. And then we watch her feed on the local population as a matter of survival, whether they are served up by her guardian (Per Ragnar), who takes the outward appearance of a father figure with paternal affections but may simply be a servant in her thrall (a Renfield with better grooming and social graces), or hunted by Eli herself.

A scene where the neighborhood drunk, part of the group that gathers every night at the pub, finds Eli huddled under the bridge, has a lovely delicacy to it: he tenderly picks up the seemingly fragile and freezing girl to carry her to safety. But the lighting and composition evokes (then upends) the scene in A Clockwork Orange where the droogs beat a tramp. Eli is no droog, she’s a predator and this is a “wounded animal” trap. The vulnerability and tenderness turn feral when she does. Let the Right One In refreshes the genre by recasting the vampire lore in an evocative setting and adding new edges (Eli sounds like a jungle cat on the kill when she attacks), unusual moods and a skewed sensibility.

It was remade in the U.S. as Let Me In, a rare remake as evocative and interesting in its own right as the original, and director Tomas Alfredson went on to direct the superb Tinker, Tailor, Soldier, Spy.

Add to My Stuff on Hulu or watch free on Kanopy, which is available through most public and college library systems.

, iTunes, GooglePlay and/or other services. Availability may vary by service.
Let the Right One In [Blu-ray]

Let The Right One In [DVD]