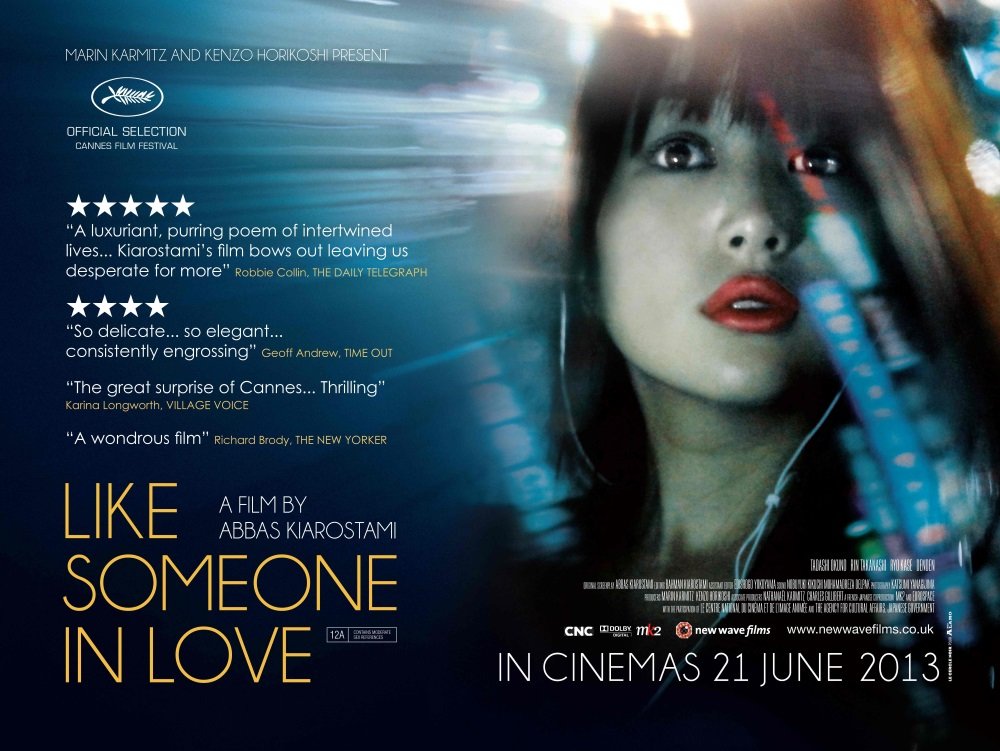 Like Someone in Love (2012) – After making his first dramatic feature outside of Iran with Certified Copy, a film shot in Italy with stars from France and England, Abbas Kiarostami hopped cultures once again, landing in Japan where he put together an odd, opaque, knotty little piece on love and affection and sex and desire that is a perfect fit with both the director and the chosen cultural milieu.

If you didn’t know it was Kiarostami behind the camera, carefully framing those scenes to keep your perspective limited like a bystander from compromised vantage point, you might think you’d stumbled across a brilliant young talent exploring the codes and assumptions and ambiguities of modern relationships in a complex social crucible. Rin Takanashi plays college girl and part-time prostitute Akiko, who has to cancel on her boyfriend for a last minute client, and Tadashi Okuno is the retired professor Takashi who hires her services and can’t decide if he wants to be sugar daddy or sage grandfatherly guardian. There’s something tender and yearning in his relationship with Akiko which gets more complicated when he tries to pass on advice to her jealous, hotheaded boyfriend (Ryo Kase), who really blows up when he discovers that Takashi is no doting family relative after all.

The story is pretty straightforward compared to the Euro-arthouse conceptual play of Certified Copy and their motivations are almost nakedly simple, at least to us. There’s a kind of purity in the melancholy of Takashi, a lonely old man who hires a hooker and ends up with a lost young woman who stirs paternal feelings, and Takanashi is both worldly and naive as the student call girl who is genuinely afraid of her boyfriend.

The enigmatic quality that felt so European in Certified Copy is just as naturally Japanese in this context, a series of tentative moves, polite codes of conduct, and bursts of unchecked emotion that suggest the formality of Ozu and Mizogucchi in the 21st century. The characters and knotty relationships are so tangled in the lies and obfuscations they tell others and themselves that they get lost in their own blinkered perspectives. Like the audience, channeled by Kiarostami’s beautiful and often aggravating compositions, they never see the big picture. As the facades fall away, the relationships unravel and fray into another perfect Kiarostami ending.

Also on Blu-ray and DVD from Criterion, featuring a 45-minute documentary:
Like Someone in Love [DVD]