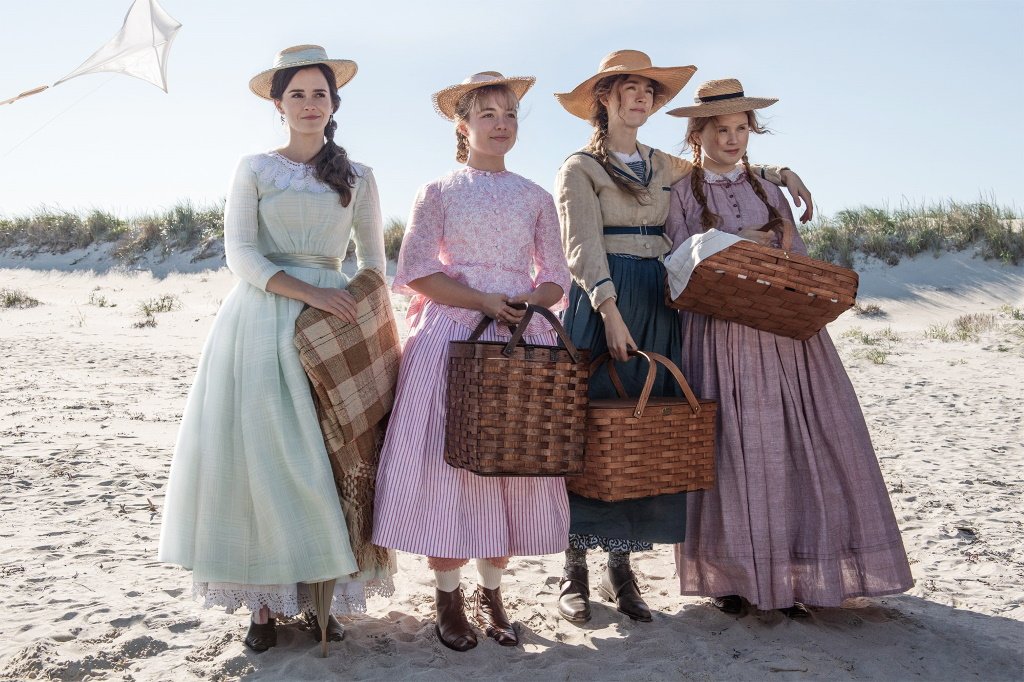 Greta Gerwig directs and adapts “Little Women” (2019, PG) and her take on Louisa May Alcott’s beloved novel brings a modern perspective to the lives of women in Civil War-era America. Saoirse Ronan stars as Jo March, the aspiring writer who draws inspiration from her family, and Florence Pugh brings a new dimension to the spoiled Amy; both earned Oscar nominations. It’s a major leap from her solo directorial debut, “Lady Bird,” with a rich screenplay, nuanced direction, and the brilliant addition of author Alcott’s own life to Jo’s dramatic journey. The superb cast also includes Emma Watson, Laura Dern, Timothée Chalamet, and Meryl Streep. It was nominated for six Oscar, including best picture and adapted screenplay, and won for costume design. Now on Cable On Demand, VOD, DVD and Blu-ray, and at Redbox.

The first foreign language film to win the Oscar for best film, Park Chan-wook’s “Parasite” (South Korea, 2019, R, with subtitles) is a social satire that melds comedy and tragedy in a commentary of class, income inequality, and human dignity. Song Kang Ho is the patriarch of a struggling family living in a basement apartment in the slums of Seoul. When their son lands a tutoring job in wealthy household, it opens the door to for the entire family to con their way into positions which, surprisingly, they perform admirably. But there are plenty of secrets and as they come out, things get vicious. The humor is both earthy and subtle and the portrait of our scheming family is at once critical and compassionate. It won four Oscars in all, including best director and original screenplay. Streaming on Hulu.

“Les Misérables” (France, 2019, R, with subtitles), the feature debut of actor-turned filmmaker Ladj Ly, is not an adaptation of the Victor Hugo’s novel but a drama of life in the slums of the Paris suburbs as seen through the eyes of a newly-transferred young cop from the provinces. A small-time crime by a dumb street kid spirals into a potential gang war thanks to the brutal tactics of the unfeeling local officers. It was an Oscar nominee for best international feature film. On Amazon Prime Video.

Willem Dafoe earned an Oscar nomination for his performance as the manager of a low-rent hotel in “The Florida Project” (2017, R), powerful and moving look at the life of an unemployed (and perhaps unemployable) single mother and her precocious daughter (the amazing Brooklynn Kimberly Prince), who mimics her mother’s aggression. Director Sean Baker is compassionate without pulling his punches on the self-destructive actions of his characters, and he presents it in vivid Day-Glo squalor. Streaming on Netflix.

“Quick Bites. Big Stories.” That’s the motto of Quibi, the new streaming service that takes a very different approach. Quibi launches with a slate of original short form dramas, comedies, documentary series, and unscripted programs designed to be watched on smartphones and other portable devices in bite-sized installments, between five and fifteen minutes an episode. Shows available at launch include the comedy “Flipped” with Will Forte and Kaitlin Olson, survival drama “Survive” with Sophie Turner and Corey Hawkins, and action thriller “Most Dangerous Game” with Liam Hemsworth and Christoph Waltz, with multiple episodes available and new episodes arriving weekly. It’s short attention span theater aimed at a young demographic that watches and shares on mobile devices. You can begin with a 90-day free trial if you sign-up at Quibi.com before April 20. After that, the service is $4.99 a month with ads and $7.99 without ads.

Free pick: for a limited time, HBO is making nine popular shows and thirty movies and original documentaries available to stream for free via the HBO Now and HBO Go apps or through the websites HBONOW.com or HBOGO.com. Now’s the time to check out “The Wire,” “The Sopranos,” or “Veep” if you’ve never seen them before.

Classic pick: Tony Curtis delivers his finest performance as a hustling press agent opposite Burt Lancaster’s cold-blooded newspaper columnist in “Sweet Smell of Success” (1957), a brilliant film noir where words are weapons and power is everything. Streaming on Amazon Prime Video.

Premium VOD: the animated musical adventure “Trolls World Tour” (2020, PG) sends the brightly-colored dolls on an odyssey to meet other tribes and musical genres. Features the voices (speaking and singing) of Anna Kendrick, Justin Timberlake, James Corden, Ozzy Osbourne, Rachel Bloom, and others. Originally scheduled for theaters before the Corona crisis shut them all down, debuts direct to Cable on Demand and VOD at a premium price.

“Dolittle” (2020, PG) stars Robert Downey Jr. in his first post-Marvel movie, a family comedy about a veterinarian who can speak to animals (voiced by Emma Thompson, Rami Malek, John Cena, Kumail Nanjiani, Octavia Spencer, and others).

Arriving early from theater due to closures is the comedy “Downhill” (2020, R), an American remake of the Swedish satire starring Julia Louis-Dreyfus and Will Ferrell, and Alaskan adventure “The Call of the Wild” (2020, PG) with Harrison Ford, Dan Stevens, and a computer generated dog.

Available direct to VOD is the romantic drama “The Lost Husband” (2020, not rated) with Leslie Bibb and Josh Duhamel;

Sam Claflin and Olivia Munn star in the Netflix Original romantic comedy “Love Wedding Repeat” (2020, not rated), which replays the comic events of a chaotic wedding day with alternate outcomes.

A kid (Seth Carr) with magical strength enters a wrestling competition in “The Main Event” (2020, TV-PG), a family comedy with Adam Pally, Ken Marino, and a ring full of features WWE superstars.

The multigenerational drama “Tigertail” (2020, PG) spans decades as it follows a Taiwanese immigrant and the reverberations of his sacrifices on his life and that of his Taiwanese-American family. Director Alan Yang based the original script on events from his own family history.

Gerard Butler and Morgan Freeman are back for “Angel Has Fallen” (2019, R), the third film in the action movie franchise.

Colin Farrell is a surgeon confronted with an impossible choice in “The Killing of a Sacred Deer” (2017, R) from “The Favourite” director Yorgos Lanthimos.

The four-minute “Sol Levante” (Japan, 2020, TV-14) is a work of experimental animation from the legendary Japanese animation studio Production I.G. and one of the first hand drawn projects produced in 4K with HDR (high dynamic range) imagery.

“Cutter’s Way” (1981, R) starring Jeff Bridges as an easy-going beach boy and John Heard as a damaged, angry Vietnam vet who get tangled in a murder mystery, is an American classic that got lost during its 1981 release and is constantly being rediscovered by new audiences. Lisa Eichhorn and Nina Van Pallandt costar and Ivan Passer directs.

“Eat Drink Man Woman” (Taiwan, 1994, not rated, with subtitles), Ang Lee’s delightful take on family, food, and love, is a deftly told tale of the sensual pleasures in life full of warmth and surprises. Also new:

Think of the low-key horror film “Little Joe” (2019, not rated), about a plant breeding project that results in a flower with a powerful sense of self-preservation, as a 21st century twist on “Invasion of the Body Snatchers” with a genetic engineering twist.

The series premiere of “Who Wants to be a Millionaire?,” the revival of the hit game show now hosted by Jimmy Kimmel, is now streaming.

Also new to Hulu is the British comedy “The Full Monty” (1997, R) and the hit romantic comedy / adventure thriller “Romancing the Stone” (1984, PG) with Michael Douglas and Kathleen Turner, along with the less successful sequel “The Jewel of the Nile” (1985, PG).

The five-part documentary series “Atlanta’s Missing and Murdered: The Lost Children” (2020, TV-MA) tackles the terror and the controversies in the horrific abduction and murder of at least 30 African-American children between 1979 and 1981. New episodes arrive each Sunday night through April.

The fourth season of “The Good Fight” (TV-MA), the smart, witty, sharply satirical spin-off of “The Good Wife,” is now underway with new episodes every Thursday.

Also new is the animated news parody “Tooning Out the News” (2020) from Stephen Colbert and the creators of “Our Cartoon President.” It launches with short segments running Tuesday through Friday and a full-length episode on the weekend.

David Tennant and Cush Jumbo star in “Deadwater Fell” (2020, not rated), a dark four-part British crime thriller from the creator of “Grantchester.” Tennant plays the survivor of a fire that killed his wife and three daughters, only what at first appears to be an accident turns out to be premeditated murder. New episodes arrive Monday through the month of April.

All ten episodes of the Dutch murder mystery “The Schouwendam 12” (Netherlands, 2019, TV-14, with subtitles) are now available to stream.

Criterion Channel presents a sequel to the “Columbia Noir” collection from its launch last year, this time collecting 25 films spanning 23 years, from proto-noir hostage thriller “Blind Alley” (1939) with Ralph Bellamy to Blake Edwards’ sharp post-noir “Experiment in Terror” (1962) with Glenn Ford. It’s a superb selection, including essential masterpieces “In a Lonely Place” (1950) with Humphrey Bogart and Fritz Lang’s “The Big Heat” (1953) with Glenn Ford (both starring Gloria Graham) and such lesser known classics as “My Name Is Julia Ross” (1945), “The Sniper” (1952), and Martin Scorsese favorite “Murder by Contract” (1958). If you’ve been meaning to explore the dark alleys of film noir, this is a great starting point.