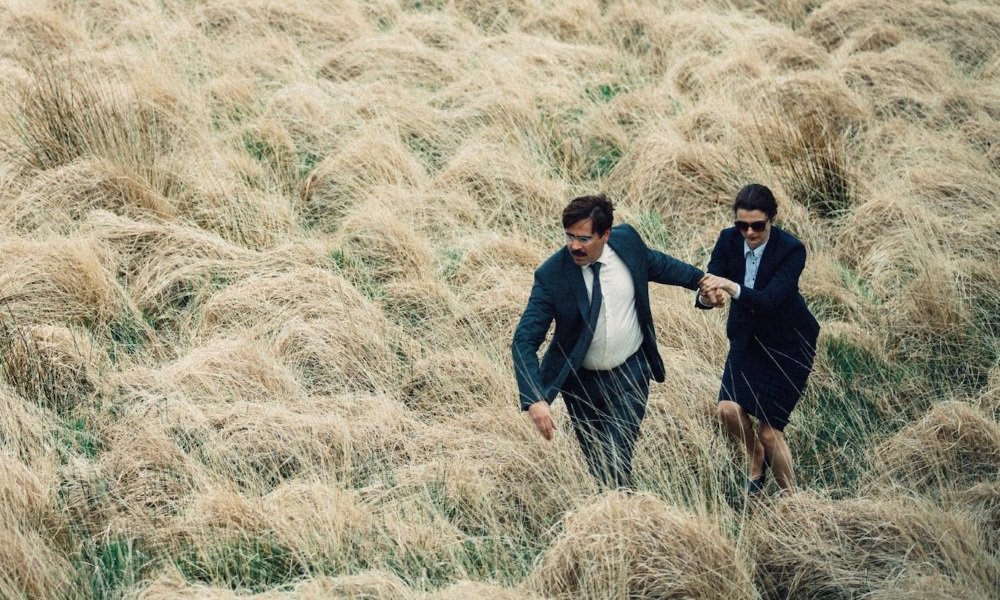 Greek filmmaker Yorgos Lanthimos describes his English language debut The Lobster (2015) as his film about love (following Dogtooth, his film on life, and Alps, on death). Which is not necessarily to call it a love story. It is, in its own way, but it just as much about the social expectations of love and marriage and coupledom that can be an obstacle to forging our own definitions of what makes us happy.

David (Colin Farrell), newly single after being dumped by his (unseen) wife of 12 years, is immediately sent to a hotel for singles to find a mate within 45 days or be turned into an animal of their choice (David choose a lobster). Pairing off is the default natural social order and remaining single is simply some kind of crippling aberration. The anonymous resort becomes the tacky setting for stilted pleasantries, unenthusiastic dating, and surreal lessons in the horrors of single life (in his first day, David has one hand handcuffed behind his back to show how life is easier “when there are two of something rather than just one”).

It’s a kind of blandly stultifying death row prison where parole is given only to those who pair off, the runaways are hunted down with tranquilizer guns (singles can buy more time by bagging a few rebels), and the rest await their sentence of transmogrification (a menagerie of decidedly non-native creatures, the exotic choices of unlucky singles and romantic failure, can be found wandering the nearby forest). The desperation is enough to contrive compatibility and put on a façade of romantic bliss, but the alternative—a society of escaped loners have taken residence in the forest—is no less restrictive or forgiving under the equally intolerant dictates of guerilla loner Léa Seydoux, who forbids coupling of any kind. Even flirting is forbidden, so when David falls for a woman known only by her “defining characteristic” (Rachel Weisz as Short Sighted Woman) and she returns his affections, their clandestine intimacy makes them doubly outcast.

There’s no logical explanation for this social dystopia of numbing conformity and false fronts of marital harmony, it simply is, in the same way that Luis Bunuel’s surreal social satires are. And chances are, if you don’t like Bunuel’s brand of philosophical whimsy, you’ll probably have a hard time connecting with The Lobster. Lanthimos invests his absurdist parable with a dark, deadpan humor and an eerie poetry, while the cast drones their awkward dialogue in conversations and comments that often come a beat or two late, turning every interaction into a forced show of social convention. Even the comradeship between David and two recent arrivals to this loveless love hotel (the limping Ben Wishaw and the lisping John C. Reilly) is strained by competition and desperation. When David and his Short Sighted sweetheart concoct a sign language with all the subtlety of semaphore to communicate their affections in the single outcast camp, their unreal conversations take on an intimacy precisely because of their furtive antics. They have found a way to say “I love you” in a world where it’s an empty ritual in one society and taboo behavior in the other.

When every relationship is held to what is ultimately an arbitrary ideal and timeline, how can a genuine emotional connection be allowed to take root and be nurtured into a thriving love? And what is a sacrifice too far to sustain it? Lanthimos doesn’t have the answers but he sure enjoys playing with the questions.

Watch free on Kanopy or on Hoopla, which are available through most public and college library systems.

, iTunes, GooglePlay, Fandango, Vudu and/or other services. Availability may vary by service.
The Lobster [DVD + Digital]

The Blu-ray and DVD editions from Lionsgate include the featurette “The Fabric of Attraction: Concocting The Lobster” and a bonus Ultraviolet Digital copy of the film.