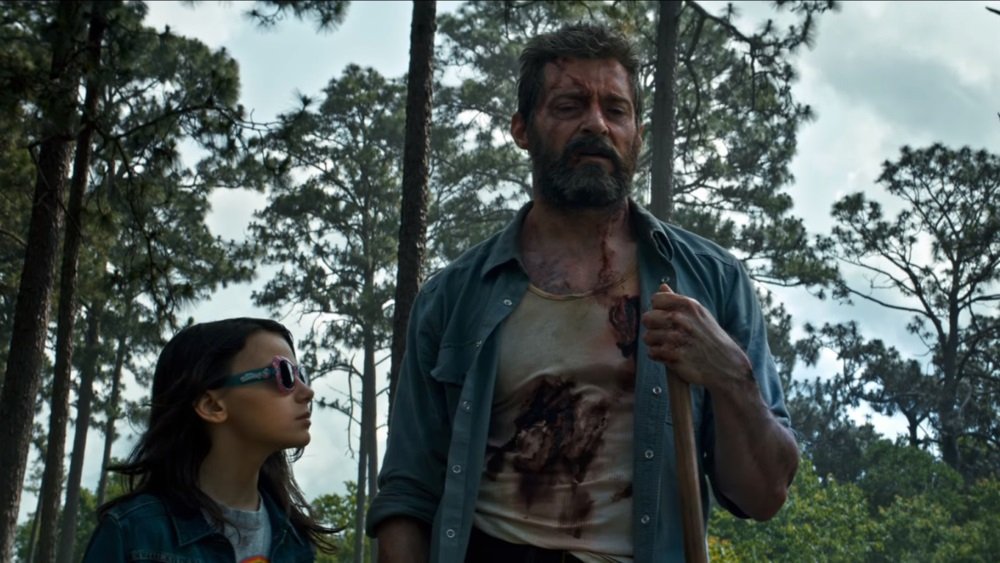 Can a comic book superhero movie tell a human story? Logan (2017) makes the case that the genre is not limited to spectacle (though this film does offer some accomplished—and violent—action scenes), end of the world stakes, or world-building chapters in a massive franchise.

Set in the near future of 2029, which is a lot like today but a little more automated and a little more depressed, a world worn out and run down with a population to match, it presents Logan (Hugh Jackman), the former X-man also known as Wolverine, in hiding. He works as a chauffeur for hire under the radar while looking after an ailing Xavier (Patrick Stewart in a scarily vulnerable performance).

Once immortal, thanks to healing powers that have kept him young for years, Logan is now breaking down and wearing out, his body ravaged by disease he can no longer combat, while Xavier is slipping into dementia and losing control of his once-finely focused mind. A dangerous thing for a telepath of his power, even more dangerous in a culture where mutantkind has been hunted to near extinction. And while Logan saves money for an escape from their Mexican compound, a kind of fantasy involving a boat and a life on the high seas, the government is on the hunt for them and for a silent young girl, Laura (Dafne Keen), who is a pint-sized Wolverine in her own right. It’s no spoiler to say that Logan, nudged by crotchety old man Xavier, becomes a reluctant protector to the girl who, at least on a genetic level, could be his daughter.

The first two solo Wolverine films are perfectly fine and very much in the realm of what we expect from a big screen superhero movie. Logan is strong, solid, old-school moviemaking that happens to feature superheroes. It doesn’t follow the comic book template. It’s not a chapter in an ongoing saga and isn’t concerned with setting up a sequel. James Mangold, who directed the earlier The Wolverine, developed the script with the blessing and backing of Jackman, which is surely the only reason it got made. It’s not the first R-rated superhero movie of the post-MCU era but, unlike the darkly comic, self-aware Deadpool, Logan takes itself seriously. Sure, it is self-aware in its own way—comic books of “X-Men” adventures read by Laura suggest a glorified vision that this film defies and the extended clip from Shane is little on-the-nose as it tips its hat to the western and to the loner hero who puts himself on the line for others—but not at the expense of the story or the characters.

There’s no shortage of evil corporate villains in the genre but this film offers corporate power as a kind of unregulated private government all its own that treats people as raw material. And while the film delivers the kind of gritty violence that fans of the Wolverine comic book have been hoping for—this Logan is angry, tired, and in pain, and he no longer holds his killing claws in check—Mangold doesn’t spare us the collateral damage of fierce, feral combat.

If it doesn’t sound like much fun, then you’re going in with the wrong expectations. Logan has always been the most compelling of the X-Men characters, a tormented loner who endured a lot of pain (emotional and physical) in his long, lonely life and still emerged on the side of the good guys, and Jackman captured the reluctant hero from the first X-Men movie. In his ninth (and, he says, final) turn in the role, he gives what feels like his final statement on the character. That’s surely why he pushed the studio to make Mangold’s film. Logan isn’t a colorful romp through genre tropes. It’s a story of mortality and family and regret and redemption. After living with the character for seventeen years, it means something to Jackman, and he lets us feel that in the conviction of his performance.

The screenplay earned an Academy Award nomination and the film earned some of the best reviews ever received by movie about a comic book superhero.

, iTunes, GooglePlay and/or other services. Availability may vary by service.
Logan [Blu-ray]

The 3-disc Blu-ray and the 4K UltraHD editions offer the revised Logan Noir B&W version prepared by James Mangold for a special theatrical rerelease and for home video. Like George Miller’s Mad Max: Fury Road – Black and Chrome edition, it doesn’t just take out the color, it accentuates the stark visual design and the graphic qualities of the image, giving it a different texture and atmosphere. Better? That’s up to you. It’s the same story but a slightly different experience, one that looks back (to classic westerns and film noirs) as much as it looks forward.

They also include “Making Logan,” a six-part documentary that covers the entire production from writing and casting to production design and action design to the final days of shooting. It runs about 75 minutes altogether.