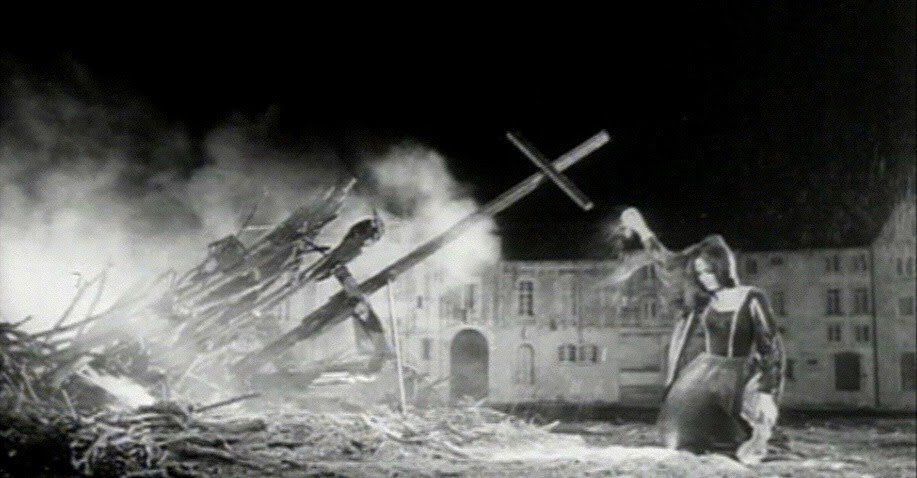 Antonio Margheriti is best known to modern audiences (if at all) thanks to Quentin Tarantino, who memorialized his name in Inglorious Basterds; it’s Brad Pitt’s cover name as he infiltrates a Nazi function and he can’t even pronounce it.

The real Antonio Margheriti was a prolific director cranking out genre pictures through the 1960s and 1970s. He made low-budget science fiction, peplum, fantasy, crime, action, westerns, and of course horror films of all kinds, and his Gothic horrors of the sixties are among his best. The Long Hair of Death (Italy, 1964), his second collaboration with cult horror icon Barbara Steele (after Castle of Blood, 1964), is a minor beauty of the genre, a medieval revenge film with an innocent burned for witchcraft, a corrupt aristocracy, a curse, a ghost, and a sweet, sweet revenge.

Steele is the eldest daughter of an innocent woman who is framed for murder and burned alive as the daughter is assaulted and murdered, all to cover up the sins of the ruling Humboldt family. Only when her innocent young stepsister Lisabeth is grown into a young beauty (Halina Zalewska) and forced into marriage to a scheming Humboldt scion does Steele return, this time as the embodiment of her mother as a demonic seductress.

It’s a little slow as these things go, with the story just creeping along as Margheriti’s camera drinks in the atmosphere of the gorgeous castle locations and the secret passageways and ominous crypts and dungeon sets. It’s an atmosphere of plague and pestilence and the tension between peasant superstition, religious power, and the purely self-serving rule of the corrupt aristocracy makes an interesting backdrop that, while never really explored, figures in the finale as revenge is served.

The rest is about the beauty of figures that float through the atmosphere of Margheriti’s sets and locations and the mesmerizing presence of Steele, whose scary beauty is delicate and vulnerable yet feral and fierce. She is equally compelling as the innocent maiden of the opening scenes, the seductress in the castle, and the avenging dark angel of her wronged mother. But even if the film meanders more than it unnerves, more interested in creating elegant images and moments than tension or mood, the finale is perfectly orchestrated and it delivers a deliciously cruel poetic justice with echoes to Mario Bava’s Black Sunday, the film that made Steele an icon of Italian horror.

, iTunes, GooglePlay, Fandango, Vudu and/or other services. Availability may vary by service.
The Long Hair of Death (Blu-ray)

The Long Hair of Death (DVD)

This film has been released in any number of substandard home video releases. The Raro Video Blu-ray and DVD releases are the only disc versions I can confidently recommend. They offer what appears to be an excellent transfer from less-than-stellar source materials. At its best the image is sharp and clean, with excellent detail and a rich gray scale in the black and white image, but the sharpness can vary from shot to shot. That may be inherent in the original photography or a matter of restoring the complete film from different sources (there are no notes on the provenance of the elements or the transfer apart from “New HD Transfer Digitally Restored). It has English language credits and both Italian and English language soundtracks, but it also has brief scenes of nudity that were surely not in the American release. It’s likely the best materials available for the film and the digital transfer is very good, delivering a strong, steady image. Note that the English soundtrack features an (unidentified) American actress dubbing Steele’s lines and a poor visual match to the lips, so I favor the Italian soundtrack with subtitles.

Also features an introduction by Chris Alexander, editor of Fangoria and Delirium Magazine and director of Blood for Irina (he makes the claim for this as Steele’s finest Italian Gothic moment), and video interviews with Edoardo Margheriti (the director’s son) and screenwriter Antonio Tentorio, all shot on standard definition video, probably a decade ago or so, and the accompanying booklet features a short essay on the film and the Italian Gothic horror genre by Alexander.