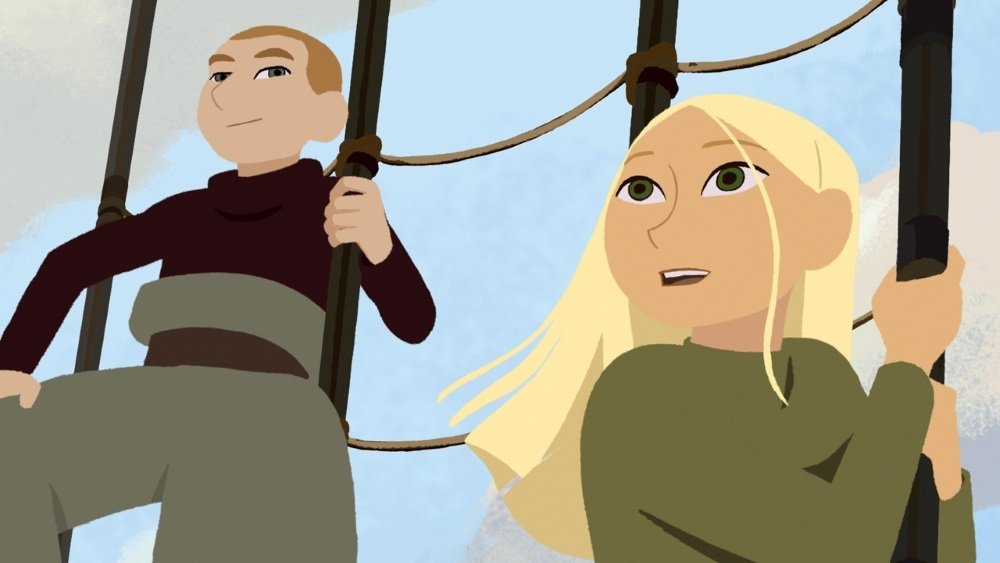 Long Way North (France, 2016) is a gorgeous French-Danish animated adventure about a 15-year-old girl from an aristocratic family in 1880s Saint Petersburg who flees her palatial home for the far north to search for the lost ship of her explorer grandfather Oloukine. He disappeared in his attempt to conquer the North Pole in the “unsinkable” ice breaker “The Davai” and is assumed by all to have sunk but Sacha, the aristocrat with the heart of an adventurer, finds clues in her grandfather’s papers that suggests he took an alternate route and she seeks out a ship to search for the ship. There’s a handsome reward for its recovery, which is what finally convinces a Captain to take on her search, but she’s driven by her adoration for her grandfather and her desire to rehabilitate his reputation.

First-time director Rémi Chayé was an assistant director and storyboard artist on the Oscar-nominated The Secret of Kells and the lovely French feature The Painting and he brings a strong, sure sense of design and layout to the film. This is traditional hand-drawn animation with an unconventional visual style, less drawn than painted with big, bold fields of color and details suggested in splashes of shadow or small, simple lines.

In the age of CGI, with its ability to create a density of detail and 3D spaces, handmade animation has responded with stylized presentations that strips detail back to the essentials. Every line and each swath of color is not simply illustrative but expressive, and the minimalist canvas is brought to life with a gentle grace of movement that defines each character: the stiff inflexibility of a Prince determined to wipe Oloukine from exploration history, the cocky charm of a first mate putting on the airs of a ship’s captain, the boyish energy of the youngest mate crawling the rigging like a veteran gymnast, and Sacha herself evolving from poised, formal city girl to assured, confident barmaid in a rough port town saloon to fearless sailor and explorer.

It’s coming of age story, age of adventure odyssey, and finally survival tale in the icy north, where Chayé’s austere approach slowly pares color from a screen filled with white fields of snow stretching to the horizon and blue-tinged glaciers and blocks of ice jutting up from the sea and the snow, swaths of serene hues that turn deadly with a thundercrack of cracking ice or a whoosh of arctic wind. The snowstorm is both thrilling and stunning to look at, from the view for afar of Sacha struggling across the white-out screen to the subjective view of the oncoming flakes assaulting the screen as the horizon disappears. It’s a thing of beauty and a dynamic work of visual drama.

The DVD-only and dual format Blu-ray+DVD featureh both the original French soundtrack with English subtitles and an English language soundtrack. Supplements include the French-language featurette “The Making of Long Way North” (39 minutes), the English-language interview featurette “The Epic Journey to Long Way North” with director Rémi Chayé and producer Henri Magalon, illustrated with film clips, production artwork, and animatics (30 minutes), and the wordless “Conceptual Short,” essentially a two-minute trailer for the film yet to be made. Also includes galleries of artwork and animatic storyboards.