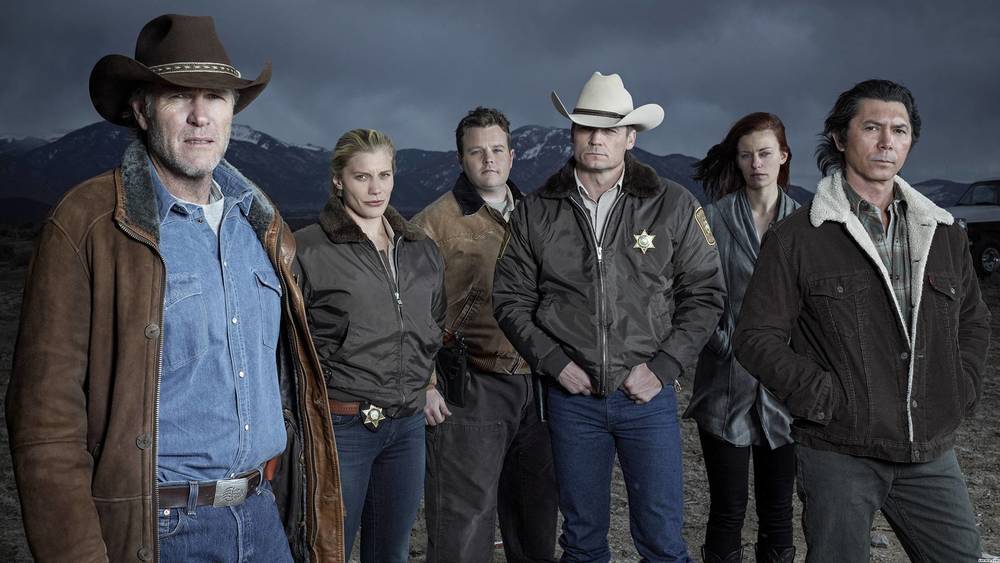 Longmire was the highest-rated scripted series on the A&E network when they cancelled it last year, much to the outrage of devoted fans. It skewed to older viewers and A&E wanted youth, which advertisers pay a premium for. Netflix, however, had great success streaming the old seasons – in fact, it’s where I first discovered the show – and kept the series alive.

The fourth season debuts on Thursday, September 10. If you haven’t caught up with the show yet or want a refresher, Netflix has the first three seasons.

Based on the novels by Craig Johnson and starring Australian actor Robert Taylor as laconic Sheriff Walt Longmire, Longmire is a modern frontier cop show set in rural Wyoming and rooted in character. Taylor comes from Australia but he seems born to the American frontier: short on talk, long on hunches, careful to keep confrontations from escalating but quick on the draw when necessary. He lopes naturally through the forests and fields in boots and his cowboy hat perches naturally on his head.

TV is always looking for a new twist on the familiar genre and this take on the mystery procedural is distinctive and effective. This is a culture of rugged individualists suspicious of any kind of authority coming on to their land. The first episode makes the point clearly with the tension between the local law and the reservation cops, a situation that clearly has a very deep history.

Filling out Walt’s team is Katee Sackhoff (Battlestar Galactica) as former Chicago homicide cop Vic (short for Victoria) Moretti, who isn’t fond of the change in social culture but is protective of her boss, Bailey Chase’s Branch Connally, the deputy sheriff who mellows somewhat from his insubordinate attitude in the first episode, and The Ferg (Adam Bartley), who appears to be something of a bumbler but is in fact a fine and loyal deputy.

Lou Diamond Phillips is Walt’s buddy Henry Standing Bear, who owns the local bar and helps out, especially when reservation politics get involved, and Cassidy Freeman is his daughter Cady, frustrated at the way Walt shuts her out with everyone else. Walt’s stoicism is just as much a weakness as it is a strength, as the final episodes of the first season reveal.

The second season carries us through a contentious campaign for Sheriff to Election Day (where deputy Bailey, backed by the local business interests, runs against Longmire) and bring a vengeful figure from Vic’s past back to cause her trouble and the third features a brutal, nearly fatal attack on Bailey from what he’s convinced is a supernatural force: the “white warrior,” ostensibly the spirit of a dead man from the nearby reservation back for vengeance. Through it all runs the loss of Walt’s wife, an unsolved murder that hangs over Walt and Henry like a shadow when the prime suspect is found dead and both friends are under suspicion.

This is one of the best mystery shows out there, smartly written and beautifully produced. The landscape dominates the show and the setting lends itself to an austere style, with a few characters set against a stark landscape or a small town barroom, and the show has a pace and tone to match. (New Mexico subs for Wyoming for the production.)

Looking for a good episode to try out before committing to it? Try the second season opener “Unquiet Mind,” which sends Walt into the mountains after an escaped prisoner while a snowstorm rages and Henry trailblazes after him on horseback. It plays like a short film in its own right, a muscular manhunt in miniature with one man taking on the elements to take down his quarry.

Pingback: What to watch the week of Friday, September 11 - Stream On Demand
Comments are closed.