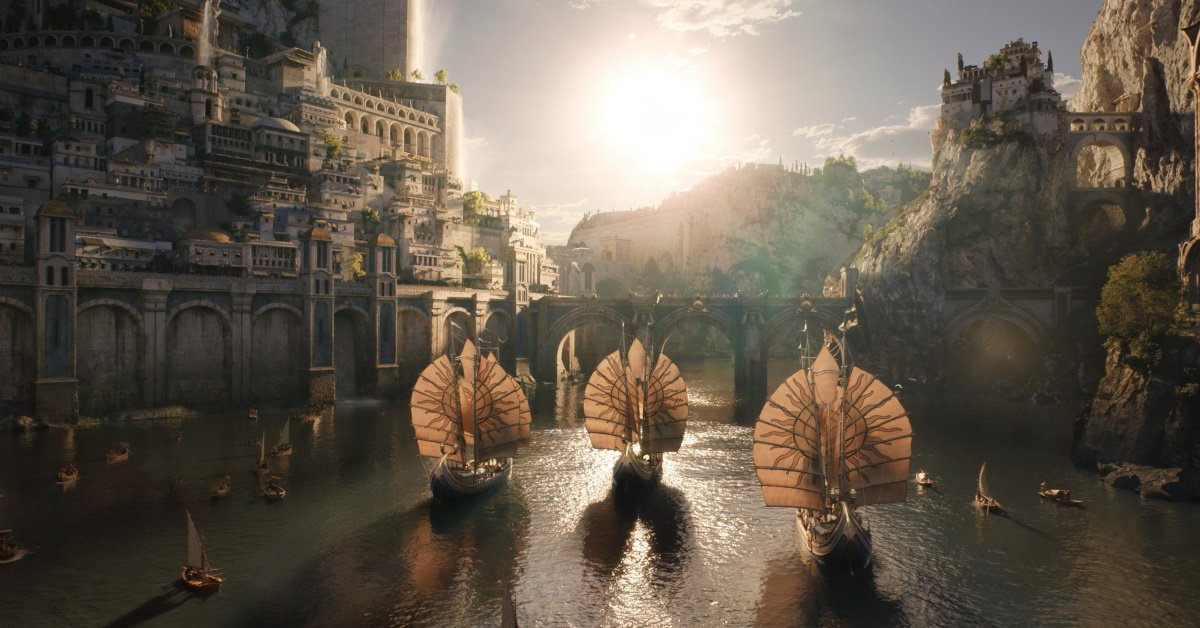 Set thousands of years before “The Hobbit” and “The Lord of the Rings,” “The Lord of the Rings: The Rings of Power: Season 1” (2022, TV-14) tells the story of the rise of Sauron and the reemergence of evil in the Second Age of Middle-Earth. Morfydd Clark plays future elf queen Galadriel and Robert Aramayo is Elrond, future Lord of Rivendell, in the epic odyssey of elves, dwarves, hobbits, and humans drawn from the tales and appendices of J.R.R. Tolkien’s novels. It’s a grand vision mounted on an unprecedented scale and the most expensive streaming series to date. J.A. Bayona (“The Impossible”) directs the first two episodes and Markella Kavenagh, Owain Arthur, and Peter Mullan costar. Two episodes available, new episodes on Fridays. (Prime Video).

Steve Carell plays a therapist held prisoner by a serial killer (Domhnall Gleeson) who wants to curb his homicidal urges in the limited series psychological thriller “The Patient” (TV-MA). His survival depends on curing a captor who doesn’t want to confront the issues at the heart of his damaged psyche. The ten-episode series is from Joel Fields and Joe Weisberg, creators of “The Americans.” Two episodes available, new episodes on Tuesdays. (Hulu)

“Elvis” (2022, PG-13), filmmaker Baz Luhrmann’s splashy take on the life of the rock and roll superstar (played by Austin Butler), follows his rise to stardom and his complicated relationship with his manager, Colonel Tom Parker (Tom Hanks), over 20 years. Like Luhrmann’s previous films, it’s operatic and visually dazzling and stirs contemporary style into historical settings, and it has a cavalier approach to the historical record in its attempt to explore Presley’s cultural impact. Olive DeJonge costars as Priscilla Presley and Helen Thomson and Richard Roxburgh plays Presley’s parents. (HBO Max)

“Jurassic World: Dominion” (2022, TV-14), the third film in the “Jurassic World” series, is set in a world where dinosaurs have migrated into the world at large. Chris Pratt and Bryce Dallas Howard return along with original “Jurassic Park”stars Laura Dern, Jeff Goldblum, and Sam Neill. Peacock offers both the original theatrical and extended versions of the film. (Peacock)

A psychiatrist (Emily Deschanel) takes her new patient Mae (Madeleine Arthur), a young woman who escaped a satanic cult, home to protect her in the limited series thriller “Devil in Ohio“ (TV-MA). Mae’s presence upends her family life before plunging them into danger from the cult itself. Showrunner Daria Polatin adapts her own novel, which is inspired by a true story, for this eight-episode series. (Netflix)

Classic pick: Clark Gable and Jean Harlow star in “Red Dust” (1932), an exotic romantic drama set on a rubber plantation in East Asia and one of the sexiest films of the early 1930s. There are, unfortunately, brief sequence with offensive racist stereotypes. (HBO Max)

Mark Rylance is Maurice Flitcroft, a man who enters the 1976 British Open Golf Championship despite having never played a round of golf, in “Phantom of the Open” (2022, PG-13), a comedy based on a true story.

A graffiti artist (George MacKay) who targets homes of the elite finds a horrifying secret in the home of a former judge (Hugh Bonneville) in the thriller “I Came By” (2022, TV-MA).

Kat Graham and Tom Hopper are strangers who find “Love in the Villa” (2022, TV-14) in the romantic comedy from Mark Steven Johnson.

True stories: “Club América vs Club América“ (Mexico) looks as the most winning and controversial soccer club in Mexico.

Kid stuff: Madison Skye Validum is the fearless Bean and Keslee Blalock is the thoughtful Ivy, unlikely best friends in “Ivy + Bean“ (2022, TV-Y), costarring Jane Lynch, Nia Vardalos, and Jesse Tyler Ferguson. It’s based on the books by Annie Barries, as are the sequels “Ivy + Bean: The Ghost That Had to Go“ (TV-Y) and “Ivy + Bean: Doomed to Dance“ (2022, TV-G).

The four-part documentary “Keep This Between Us” (not rated) investigates the epidemic of grooming by teachers in U.S. high schools.

Jessica Chastain won an Oscar for her portrayal of televangelist Tammy Faye Baker in the drama “The Eyes of Tammy Faye“ (2021, PG-13).

An isolated teenage girl becomes obsessed with an online role-playing horror game becomes her entire life in “We’re All Going to the World’s Fair“ (2021, not rated).

“The Eyes of Orson Welles“ (2018, not rated) explores the rarely-seen sketches and paintings by the legendary filmmaker and actor.

HBO Max adds a collection of Elvis movies, including the iconic “Jailhouse Rock“ (1957), the Seattle-set “It Happened at the World’s Fair“ (1963), and the concert documentary “Elvis on Tour“ (1972, G), to accompany the debut of Baz Lurhmann’s “Elvis.”

The family drama “Life by Ella: Season 1“ (TV-G) follows a schoolgirl who embraces life with a new passion after defeating cancer.

A pastor tries to remake his image after a sex scandal in the mockumentary “Honk for Jesus. Save Your Soul.“ (2022, R) starring Sterling K. Brown and Regina Hall.

Ten Alfred Hitchcock classics stream this month, including his personal favorite “Shadow of a Doubt“ (1943) with Joseph Cotten, the brilliant “Rear Window“ (1954) with James Stewart and Grace Kelly, the landmark horror film “Psycho“ (1960) with Anthony Perkins, and nature-run-amok horror “The Birds“ (1963).

The animated “Paws of Fury: The Legend of Hank“ (2022, PG) is a martial arts comedy about a hapless hound (voiced by Michael Cera) who becomes the defender of a village of cats. It’s a family friendly remake of “Blazing Saddles” featuring the voices of Samuel L. Jackson, Ricky Gervais, Mel Brooks, and George Takei.

The animated “Pantheon: Season 1“ (not rated) is a science fiction drama based on the short stories by Ken Liu and featuring the voices of Daniel Dae Kim, Katie Chang, and Paul Dano.

True stories: “McEnroe“ (2022, TV-MA) provides an intimate look at the tumultuous life and career of the iconic tennis superstar, famous for his epic matches with Bjorn Borg and infamous for his explosive behavior on and off the court.

The prison drama “Screw: Season 1“ (not rated) tells its story through the experiences of the guards who work there.