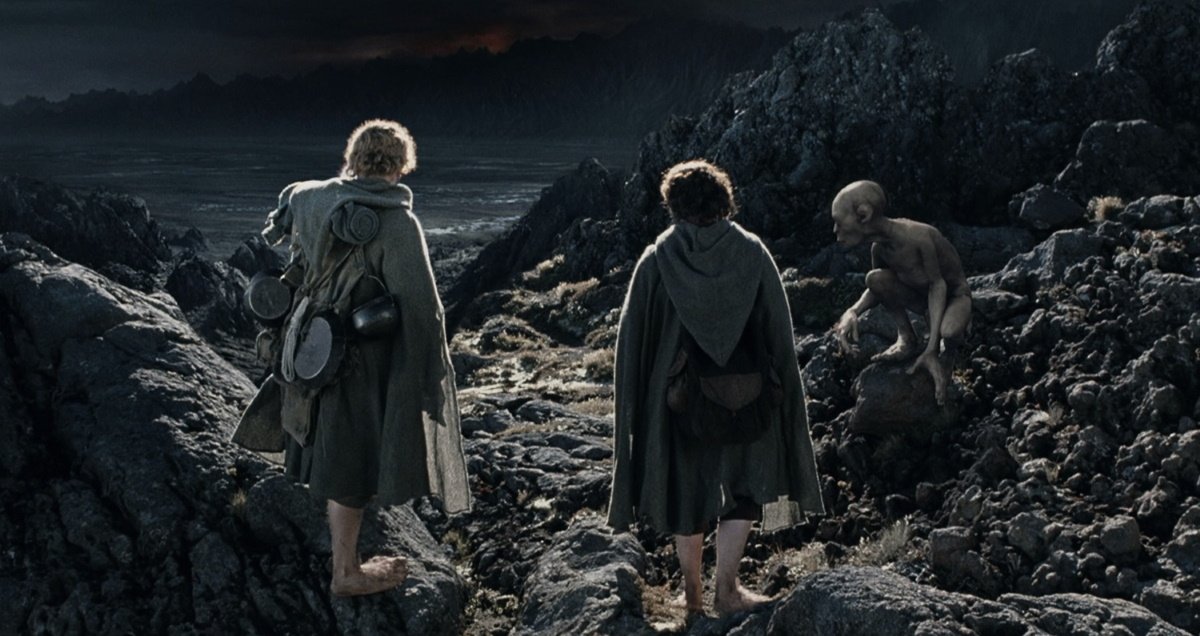 Peter Jackson’s cinematic recreation of Lord of the Rings: The Two Towers (2002) is thrilling, enthralling, and dizzyingly exciting. Jackson finds the soul of the film in Viggo Mortensen’s wandering warrior-prince Aragorn, reveals the torment in Elijah Wood’s chosen-one pilgrim Frodo and the soul-crushing weight of the ring that Tolkien could only talk around. And he turns the wary relationship between Frodo and the gnarled, psychotically obsessed Gollum into the defining drama of Frodo’s hopes and fears along the quest.

The famously computer generated Gollum is a wonder of a character, a feral stray dog with a schizophrenic nature at war with himself when he gets his first taste of kindness from Frodo, as tragically human as any character in the party. The motion-capture performance by Andy Serkis set the bar for the marriage of acting and special effects.

Jackson dares to throw the viewer into the fray without little more than a brief, nightmarish flashback, and turns the Battle of Helm’s Deep, a brief ten page episode in the novel, into the thrilling turning point in the war: the first glimpse of the coming apocalypse and the triumph of solidarity in the face of the march of evil.

Jackson’s camera once again swoops over landscapes like an eagle, charges through the hordes that blanket the earth, and slows only in moments of intimacy. More than simply translate the fantasy masterpiece to the screen with respect, Jackson brings blood and thunder and human scale to a tale so long relegated to the archetypes of myth.

It won Academy Awards for visual effects and sound editing and three BAFTAs, including the audience award.

Months after the film was released to DVD and Blu-ray, Jackson released an extended version exclusively to home video. Running almost four hours long, Jackson’s extended version weaves not just deleted scenes back into his vision, but additional background and character insight shaved out of existing scenes. Most of it is, appropriately, folded into the beginning (which reintroduces Frodo with an entirely different scene) and ending (giving the audience more time to ease down from the power of the Battle of Helm’s Deep). Though not “essential” information, it adds in the kind of weight that gives the epic even greater heft and home video is the perfect arena for such an expansion. There is about 40 minutes of new footage all told; 11 minutes of longer version belong to credits dedicated to the members of the Lord of the Rings Fan Club.

Add to My Watchlist on Amazon Prime Video or to My List on HBO Max, or add the Extended Edition to My List

Supplements on the two disc special edition of the original theatrical version include the 14-minute made-for-cable documentary On the Set: The Lord of the Rings: The Two Towers (originally made for Starz) and the 43-minute WB special Return to Middle-Earth, Sean Astin’s five-minute side project The Long and Short of It (a sweet little short made with volunteers from the cast and crew) and a “making of” Astin’s film, and eight brief behind-the-scenes featurettes originally made for www.lordoftherings.net.

The home video exclusive Extended Edition (which seamlessly weaves the additional footage and special effects into the film with a revised score) takes the first two discs of the four disc set and includes four audio commentary tracks with over 30 participants. The most informative and enlightening of the tracks is (no surprise) by director Peter Jackson with his co-writers Fran Walsh and Phillippa Boyens, who discuss everything from adapting and visualizing the book to finding locations and physically shooting the production to reweaving favorite scenes and cut lines back into this extended version. The other tracks belong to The Design Team (seven participants including production designer Grant Major, conceptual designer and set decorator Alan Lee, supervising art director Dan Hennah, and Richard Taylor and Tania Rodger from the Weta Workshop), The Production/Post-Production Team (fourteen participants, including cinematographer Andrew Lesnie, editor Mike Horton, composer Howard Shore, visual effects supervisors Jim Rigiel and Joe Letteri, and producers Barrie M. Osbourne, Mark Ordesky, and Rick Porras), and The Cast (sixteen participants, including Elijah Wood, Sean Astin, John Rhys-Davies, Orlando Bloom, Christopher Lee, and Andy Serkis), the latter recorded separately or in small groups (the Hobbits and Gollum together, for instance). Each track features super-titles identifying every speaker, an essential supplement in such dense commentaries,

Disc 3 and 4—”The Appendices”—feature an epic documentary to match the production, following the film from adapting and scripting through constructing the sets and props, shooting the production, and creating the special effects, to editing, scoring, and mixing the film, all organized in well-shaped chapters that can be viewed individually or seen straight through as a single six-hour overview. The chapter on Gollum (a fascinating invitation into the process of creating a fully fleshed out CGI character and a tribute to the skills of Andy Serkis, whose “performance” helped sculpt and enrich that character) can stand alone as a feature length piece. To supplement the documentary are an atlas of Middle-earth tracing the journey, an interactive map of New Zealand showing the shooting locations, and galleries featuring hundreds of behind-the-scenes photographs, personal cast photos, and production art (which can also be viewed as slideshows with commentaries by the artists). The Gift Set features a Gollum polystone statue created by Sideshow Weta, a bonus DVD with a documentary about the Weta Workshop and how the Gollum statue was created, and a printed companion piece showing how Gollum evolved from pencil sketch to digital character.