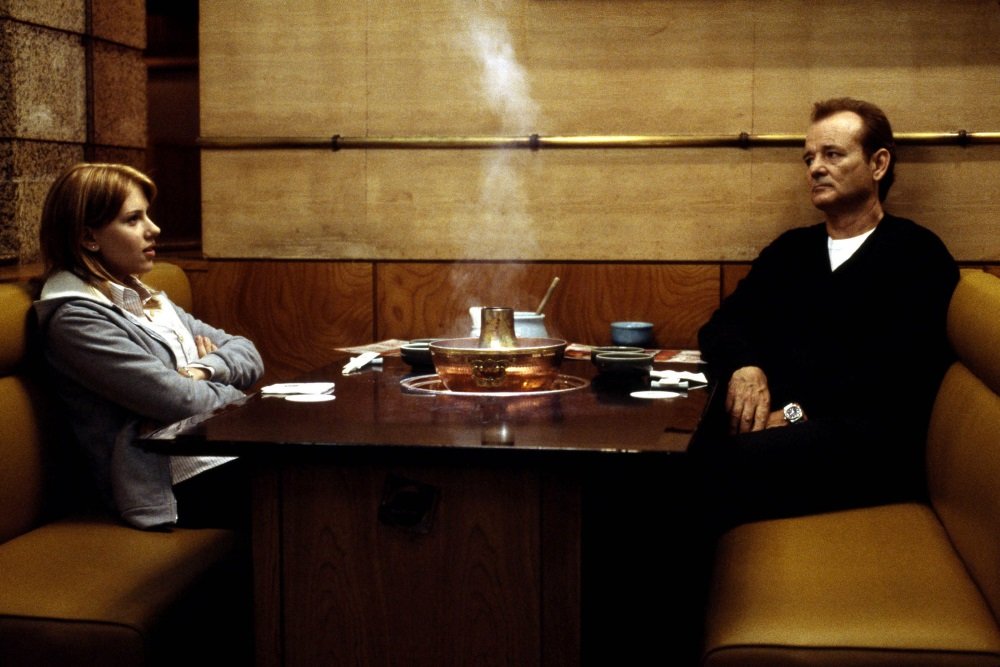 Lost in Translation (2003) – Bill Murray is Bob Harris, a former movie star and minor film icon in Japan to shoot a whisky campaign (for which he’ll earn more than he’s seen in many a movie). Set up in a modern hotel the size of a small city while his marriage back home ossifies in awkward small talk and Fed-Ex-ed carpet samples, he’s more alienated than awed by Tokyo’s overwhelming urban crunch.

Scarlett Johansson’s Charlotte is delighted by the place and wanders the streets to drink in the bustle and busy play of the urban wonderland, but she’s frustrated by her boyish, immature husband (Giovanni Ribbisi), who abandons her to the boredom of isolation. The two insomniacs cross paths in their nocturnal wanderings and end up unlikely buddies at a time they both need a friend.

Sofia Coppola’s sophomore film (following the gently assured The Virgin Suicides) is another exploration of delicate relationships and uncommunicated frustrations, this one in a beautifully composed atmosphere of isolation. Murray’s trademark barbs become Bob’s armor to cover up his discomfort and sense of aloneness, which eases in Charlotte’s company. If there’s a hint romantic longing the possibilities feel more wrapped up in the broken communication and awkward talks in the marriage problems both are experiencing. Lost in Translation isn’t about a May-December romance or a brief encounter in a faraway place. It’s about the power of unexpected friendships.

Anna Faris has a small but hilarious role as an American actress who utterly murders the song “Nobody Does it Better” at karaoke.

It made dozens of Top Ten lists and critics’ groups awards for 2003 and won three Golden Globes, three BAFTAs (including Best Actor and Best Actress for Murray and Johansson), and an Oscar for Coppola for Best Original Screenplay.

Also on Blu-ray and DVD and on SVOD through Amazon Video, iTunes, GooglePlay, Vudu and/or other services. Availability may vary by service.
Lost in Translation [DVD]