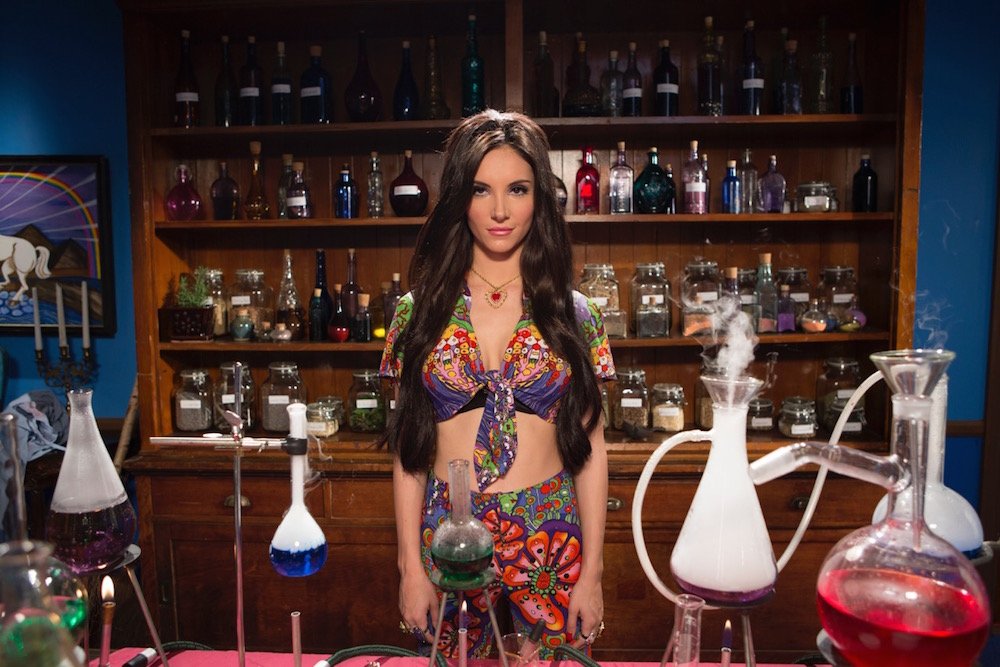 The Love Witch (2016), Anna Biller’s collision of feminism, romantic fantasy, power, sex, and horror opens with its cool heroine Elaine (Samantha Robinson), a slim, raven-haired beauty with a smear of turquoise eye shadow and eyelashes like wings, driving up the Pacific Coast Highway in a candy apple red convertible and matching outfit. She could have stepped out of a sixties glamour magazine and the vintage back projection photography evokes the color films of Hitchcock, just a little dreamy and unreal. Her husband left her, she muses in voice-over, and she’s heading out of San Francisco to start again, but the short, sharp shards of flashbacks show him dying after drinking some potion she whipped up for him. Murder or accidental magic overdose?

Elaine is a practicing witch but this is no Bell, Book and Candle. It’s more like Burn, Witch, Burn or Hammer’s The Witches colliding with a Doris Day sex comedy in the free love hippie culture, all existing in a bubble of sixties style and attitude that is somehow intact in modern day North Coast California. Elaine arrives in Eureka, CA, in mini-skirts and black thigh boots that are definitely made for walking, and she leaves a trail of sex magic accidents in her wake by the end of the film. She’s looking for true love, she says, though she seems more focused on the seduction than the commitment, and as she works her way through one dream lover after another, her initial attraction sours into a contempt as they buckle under her magic and lose the masculine strength that she found so attractive. She’s a mix of femininity and feminist, part old-fashioned romantic and part strong, sexually confident woman who isn’t shy about going after any man who piques her interest. Even the husband of a friend, who she samples while her friend is out of town then drops when a better, beefier opportunity comes along: Griff (Gian Keys), the lead detective in the investigation of her first local victim.

The acting is purposely stiff, with a touch of declamatory speaking, like they are acting on a sixties TV show, and Biller scores the film too, evoking lush romances, Hitchcockian suspense, and medieval folk music, with samples of Ennio Morricone and Bernard Herrmann (among others) mixed in

The tangle of romantic fantasy and sexual power gets confused along the way, and that contradiction as at the root of Elaine, an independent single woman who takes charge of her own sexuality, yet preaches a submissive idea of catering to men’s fantasies. She’s addicted to love, she confesses in the opening scenes, and it turns out it’s not a figure of speech or a metaphor. But she confuses desire and sexual enjoyment for love and has no loyalty to the sisterhood that unites her fellow witches. Elaine doesn’t care who gets sacrificed in her search for love.

Also on Blu-ray and DVD from Oscilloscope Laboratories and on SVOD through Amazon Video, iTunes, GooglePlay and/or other services. Availability may vary by service.
The Love Witch [Blu-ray]