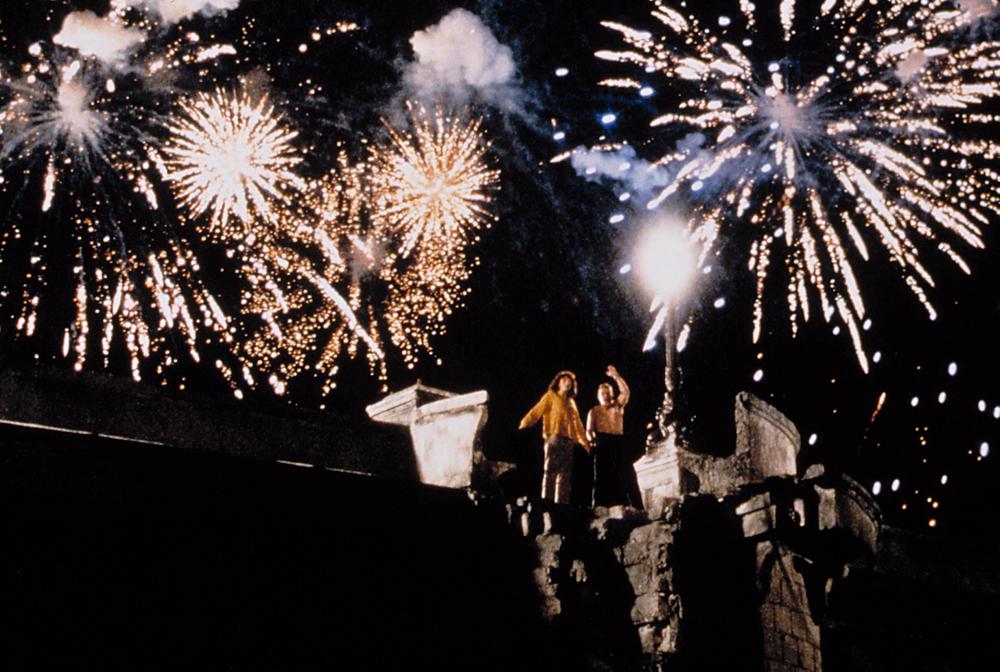 The Lovers on the Bridge (France, 1991), Leos Carax’s tale of l’amour fou, was the most expensive film ever made in France at the time and remains one of the most ravishing made anywhere ever. It was also a commercial disaster, alternately celebrated as a triumph of personal expression and vilified as the French equivalent of Heaven’s Gate, and despite the presence of Juliette Binoche it was almost a decade before the film finally made it to American shores. The Lovers on the Bridge is the American title, a rather prosaic translation of Les Amant du Pont-Neuf. In French, the title references the oldest bridge spanning the Seine in Paris and all the history and romance that name embodies.

Alex (the superb Denis Lavant), a volatile, alcoholic street performer with a lovable impulsiveness that masks deeper mental scars, lives on the closed-for-repairs Pont-Neuf with his best friend/mentor Hans (Klaus-Michale Gruber), who regulates his alcohol and administers his medication. Into their lives wanders Michele (Binoche), an emotionally distraught artist slowly losing her sight. As impulsive as Alex, she embraces the scruffy street performer like a soul mate and the two find a sort of equilibrium with each other, living a bohemian fantasy life of undisturbed plenty. And when that fantasy is disturbed by a possible cure for her failing eyesight, Alex prevents her from discovering a salvation that could take her away, the epitome of l’amour fou in the wildly melodramatic world of Carax.

Carax feels more deeply for Alex than I do, suggesting his outpouring of love can in some ways redeem his essentially selfish nature, that his passion overcomes his campaign to keep Michele his own at the expense of her art and her sight. But there’s no denying Carax’s emotional and cinematic passion. Lovers on the Bridge is informed by Carax’s cinematic intelligence and a tremendous confidence. In Carax’s Paris, a locksmith turned street person can jimmy his way into one of the most heavily protected art museums in the world (just to admire the beauty by candlelight) and three homeless souls can make the Pont-Neuf, the oldest and most famous bridge in Paris closed off for repairs, their home for a summer undisturbed by police, miscreants, or for that matter repair workers.

The result is a lush cinematic painting of love, passion, and madness expressed in a romantic surrealist style and images charged with color and magic: water skiing down the Seine as strings of lights dance on the water, fireworks exploding overhead while the lovers giggle in a private joke underneath, Alex leaping and somersaulting while blowing flowers of fire during a street performance. It’s a cinema of unbound emotion and it is amazing.

Also on Blu-ray and DVD and on SVOD through Amazon Video, iTunes, GooglePlay, Fandango, Vudu and/or other services. Availability may vary by service.
Lovers on the Bridge [Blu-ray]

Lovers on the Bridge [DVD]

Kino Lorber delivers the film’s Blu-ray debut and a new DVD edition (unseen for this review). The Blu-ray improves upon the previous American DVD release with more accurate skin tones, richer colors, and greater texture and detail. Features the video essay “Water and Stone” (9 minutes) by Cristina Alvarez Lopez & Adrian Martin, originally produced for the website / streaming service MUBI, and the original trailer, plus a 12-page booklet with an essay by Ignatiy Vishnevetsky.