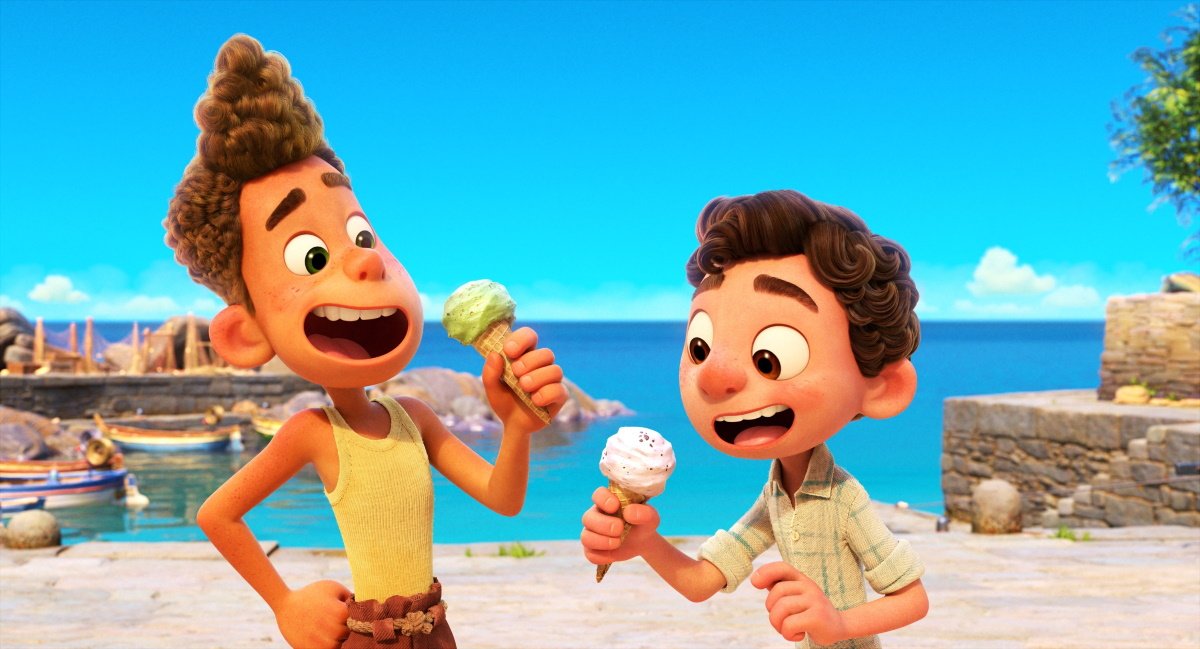 In the animated fantasy “Luca” (2021, PG), two best friends (voiced by Jacob Tremblay and Jack Dylan Grazer) have the summer of their lives in a beautiful seaside town on the Italian Riviera. But they have a secret: they are friendly sea monsters who take on human form when they step out of the ocean and onto land. The Pixar adventure is the feature debut of Italian-born animator turned director Enrico Casarosa, who pays tribute to the Italian culture of the 1950s in his tale of youth and friendship. (Disney+)

Kevin Hart takes a dramatic turn in “Fatherhood” (2021, PG-13), playing a father who becomes a single parent to a young daughter at the sudden death of his wife. Alfre Woodard and Lil Rel Howery costar in the family drama co-written and directed by Paul Weitz. Originally produced for theaters, it is now a streaming original. (Netflix)

Denzel Washington and Rami Malek play police detectives whose hunt for a serial killer in 1990s Los Angeles tips into obsession in “The Little Things” (2021, R). Jared Leto costars in the psychological thriller from “The Blind Side” director John Lee Hancock, which previously streamed for a month while it was in theaters. (HBO Max)

The documentary “Civil War (Or, Who Do We Think We Are)” (2021, not rated) travels to country to explore how Americana tell the story of the Civil War, and what those different those presentations say about us. (Peacock)

“The Reason I Jump” (2020, TV-14) uses the bestselling memoir by Naoki Higashida’s as a framework to explore the experiences of five nonspeaking autistic people from four countries. (Netflix)

The two biggest movie monsters around go toe-to-claw in “Godzilla vs. Kong” (2021, PG-13) after the lizard king attacks Florida and the giant ape is set free from Skull Island for the inevitable clash of the Titans. Alexander Skarsgård, Rebecca Hall, Millie Bobby Brown, and Brian Tyree Henry lead the human cast. Also on DVD and at Redbox.

A small town in Quebec is plunged into suspicion when a pregnant teenager refuses to identify the father in “Les Nôtres” (2021, not rated, with subtitles). Also new:

“Sir! No Sir!” (2005, not rated) profiles the anti-war movement begun by soldiers in Vietnam who took the front lines of resistance through protests, underground papers, and mass civil disobedience. Pair it with “FTA” (1972, R), which profiles the satirical comedy show with Jane Fonda, Donald Sutherland, Holly Near, and Peter Boyle that performed for American servicemen in Vietnam.

International passport: gangster drama “A Family” (Japan, TV-MA, with subtitles), a feature about a young yakuza devoted to the family code in changing times;

“The Prime Day Show” (2021, not rated) this year is a three-part musical event featuring Billie Eilish, H.E.R., and Kid Cudi in lavish presentations of their music.

Nicolas Cage stars in the horror film “Willy’s Wonderland” (2021, TV-MA) as a loner who gets locked in an abandoned family fun center where the animatronic mascots come to murderous life.

In “The Obituary of Tunde Johnson” (2020, not rated), a Nigerian American teenager is trapped in a time loop which ends in his death at the hands of the police.

Barbara Sukowa and Martine Chevallier are retired women who have kept their love a secret in the LGBTQ romantic drama “Two of Us” (France, 2019, not rated, with subtitles).

“Gone Girl” (2014, R), directed by David Fincher and starring Ben Affleck and Rosamund Pike, is a smart, cynical thriller with a streak of dark humor and social satire.

“Not Fade Away” (2012, R), an autobiographical film from “Sopranos” creator David Chase, is a coming of age drama via the story of the rise and fall of a rock band in the 1960s.

True stories: The non-fiction limited series “Rūrangi” (not rated) follows a New Zealand transgender activist as he returns to his remote, politically polarized hometown to reconnect with his father.

The documentary “Revolution Rent” (2021, TV-14) chronicles a stage production of “Rent” in Cuba.

Every episode of the new season of “In Treatment“ (TV-14) and more episodes of “Genera+ion: Season 1” (TV-MA) are now available.

“Paddington” (2014, PG), based on the British storybooks of a gentle talking bear with a taste for marmalade, is a family friendly comedy with a droll British wit.

A pair of limited series are currently unfolding on MHz. A small platoon of German soldiers hide out in a Polish swamp in the final days of World War II in “The Turncoat” (Germany, TV-MA, with subtitles) and a group of deprogrammers who rescue people from cults get pushed to the brink “Sekta” (Russia, TV-14, with subtitles). New episodes arrive on Tuesdays.

“Bad Spaniard: 11 Scathing Satires by Luis García Berlanga” celebrates the films of a forgotten Spanish master who took on the hypocrisy and sanctimony of Franco-era culture, from his antinationalist satire “Welcome Mr. Marshall!” (Spain, 1953, with subtitles) to “Everyone Off to Jail” (Spain, 1993, not rated, with subtitles), including two scathing satires that skirted the censors and are considered to be his masterpieces: “Plácido” (Spain, 1961, with subtitles), his takedown of upper-class hypocrisy, and the black comedy “The Executioner” (Spain, 1963, with subtitles). Also new: