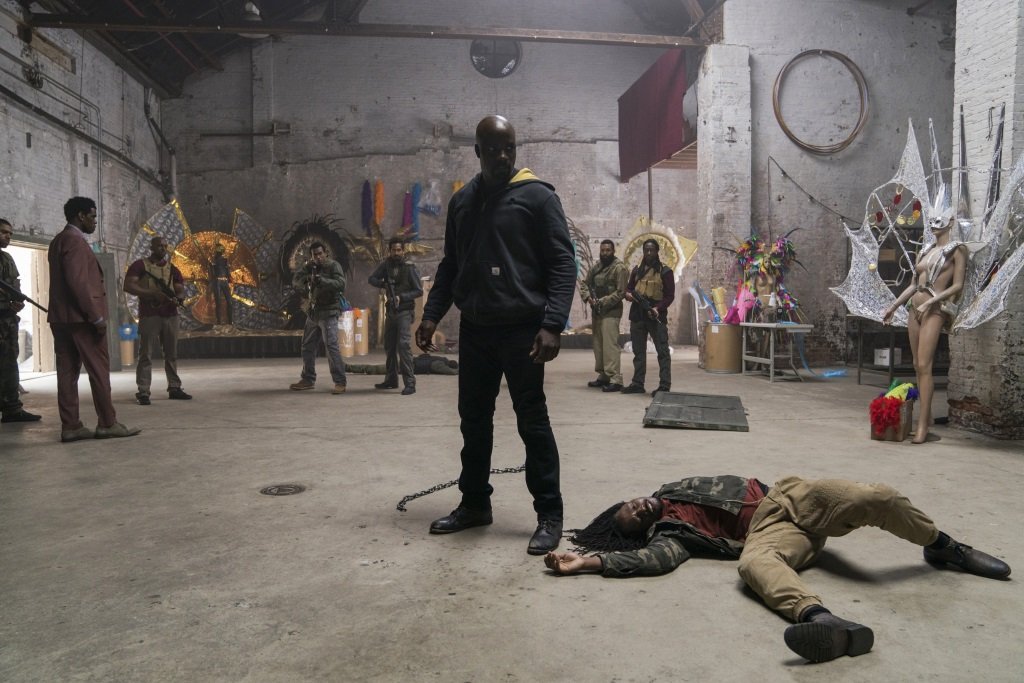 The streetwise version of Marvel’s superhero universe continues on Netflix with the second season of their hit series Luke Cage, starring Mike Colter as the bulletproof Harlem hero. The show steps up its game this season as Cage takes on crime queen Black Mariah (Alfre Woodard) and a new villain: Bushmaster (Mustapha Shakir).

“While season 2 is far from perfect, it not only avoids the sophomore slump, it surpasses season 1 through a relentless focus on how both its heroes and villains are defined by their families,” writes Samantha Nelson for The Verge.

Yellow Submarine (1968, G) may essentially be a half-hour psychedelic fairy tale stretched to feature length with the help of animated music videos to scads of Beatles songs but the mix of pop-art designs, screaming bold color, and Escher-esque visual gags is just as infectious today as fifty years ago. Even the chirpy “Love is all there is” message feels more nostalgic than naïve, and dig all that drug humor and the groovy references to Beatle lyrics. The Beatles don’t actually supply their own voices—actors did the honors—but they contribute a brief personal appearance at the end of the film.

It’s streaming on Amazon Prime Video as it celebrates its 50th anniversary.

In Bruges (2008, R), the first feature from filmmaker Martin McDonagh (Three Billboards Outside Ebbing, Missouri), is a witty, dark-humored crime drama with Colin Farrell and Brendan Gleeson as hitmen hiding out in the magnificent ancient city in Belgium. Streaming on Netflix.

In the viciously funny The Death of Stalin (2018, R), filmmaker and savvy political satirist Armando Iannucci reimagines the scramble for power in the Soviet Union as a savage comedy of petty grudges, unstable alliances, and literal backstabbing. Steve Buscemi is master survivor Nikita Khrushchev and Jeffrey Tambor and Michael Palin co-star. On Cable On Demand and VOD, plus DVD and Blu-ray.

Chloe Grace Moretz plays a reporter struck by a mysterious, mentally devastating illness in Brain on Fire (2017, PG-13), a disease-of-the-week drama inspired by a true story. It debuts directly to Netflix.

The romantic drama Us and Them (China, 2018, not rated, with subtitles), the debut feature from actress-turned-filmmaker Rene Liu, arrives on Netflix after a successful theatrical run in China.

The animated Batman: Return of the Caped Crusader (2016, PG) channels the campy 1960s live-action series and features the voices of Adam West and Burt Ward as the Dynamic Duo and Julie Newmar as Catwoman. Reviewed on Stream On Demand here.

Layers of reality blur and merge in Monte Hellman’s Road to Nowhere (2010, R), starring Shannyn Sossamon as an unknown actress who just may be recreating a role she played in real life.

Ryan Gosling plays a self-hating young Jewish man who becomes a Nazi skinhead in The Believer (2001, R), the award-winning controversial drama that launched Gosling’s career as an intense young actor.

Wallace & Gromit: The Complete Collection (1989-2008) features all four short films created for Aardman Animation by Nick Park: Oscar-nominated A Grand Day Out (1989) and A Matter of Loaf and Death (2008) and Oscar-winning The Wrong Trousers (1993) and A Close Shave (1995). Much shorter but a lot of fun are bite-sized Wallace & Gromit’s Cracking Contraptions (2002).

Streaming TV: before she married into British royalty, Meghan Markle got a TV wedding in the USA legal melodrama Suits: Season 7 as the show gave her a farewell episode.

Kid stuff: Superman: The Complete Animated Series (1996-2000) features the voices of Tim Daly as the Man of Steel and Dana Delany as Lois Lane in a bright, colorful alternative to the shadowy animated “Batman” revival.

Transformers: The Last Knight (2017, PG-13), the sixth film in the action franchise of giant robot wars, adds a little gravitas to the cast: Anthony Hopkins joins Mark Wahlberg and Josh Duhamel. And of course a platoon of giant mechanical monsters that fold themselves like origami (Prime Video and Hulu).

Punisher: War Zone (2008, R), with Ray Stevenson in the title role, is a reminder of how much better the Netflix version of the character is than the movies, but Dominic West is a lot of fun chewing the scenery as gangster turned supervillain Jigsaw.

Streaming TV: Australian comedy The Other Guy: Season 1 stars comedian Make Okine as a radio DJ back in the dating pool after years in a steady relationship.

Hulu brings the British forensic crime drama Silent Witness up to the present by adding a dozen seasons of the show.

Kate Winslet and Idris Elba star in The Mountain Between Us (2017, PG-13) as strangers who must work together to survive a plane crash.

The HBO Original documentary It Will Be Chaos (2018, not rated) looks at the European refugee crisis through the personal stories of displaced people risking all to escape war.

Available Saturday night is Kingsman: The Golden Circle (2017, R), which partners the elite British spy organization with its American counterpart and adds Julianne Moore, Halle Berry, and Channing Tatum to the cast.

The fourth season of the Showtime Original drama The Affair with Dominic West, Ruth Wilson, Laura Tierney, and Joshua Jackson is now underway.

TCM Select Pick of the Week is Ninotchka (1939), the sophisticated comedy from Ernst Lubitsch that was promoted with the tag line “Garbo laughs!” Swedish beauty Greta Garbo was the embodiment of Hollywood grace, glamour, and tragic romance when she turned her image upside down to play a humorless Russian bureaucrat sent to Paris to secure the return to the Russian crown jewels. Melvyn Douglas is the frivolous but debonair playboy lawyer who stops sparring and starts wooing the ice princess, melting her icy resolve and finding a romantic under all the practicality of Soviet sensibility. Garbo is never less than elegant even in drab working uniforms and she is born comedienne and Douglas is a charming romantic lead, even if he lacks the star wattage that makes Garbo glow. The deft screenplay by Billy Wilder and Charles Brackett pokes fun at both sides of the cultural divide and Lubitsch affectionately makes the case that love conquers politics. Watch for Bela Lugosi in a minor role as a Soviet functionary seduced by French nightlife along with comrades in sin Sig Ruman and Felix Bressart. Streaming through December 14

It’s one of fourteen films celebrating “Star of the Week: Greta Garbo,” which includes nine silent movies. Silent cinema is where she forged her enigmatic persona and FilmStruck presents her American debut Torrent (1926) and three lavish romantic melodramas co-starring her great screen partner John Gilbert: Love (1927), an adaptation of “Anna Karenina,” Flesh and the Devil (1926) and A Woman of Affairs (1928) (all silent with score). She also stars as Mata Hari (1932) and Queen Christina (1933) in the two grandly-mounted melodramas making their respective streaming debuts.

“Director of the Week: Derek Jarman” celebrates the renegade British filmmaker with nine features, including his debut feature Sebastiane (1976, X) and the newly restored Edward II (1991, R), and a 2008 documentary written and narrated by Tilda Swinton, his friend and frequent collaborator.