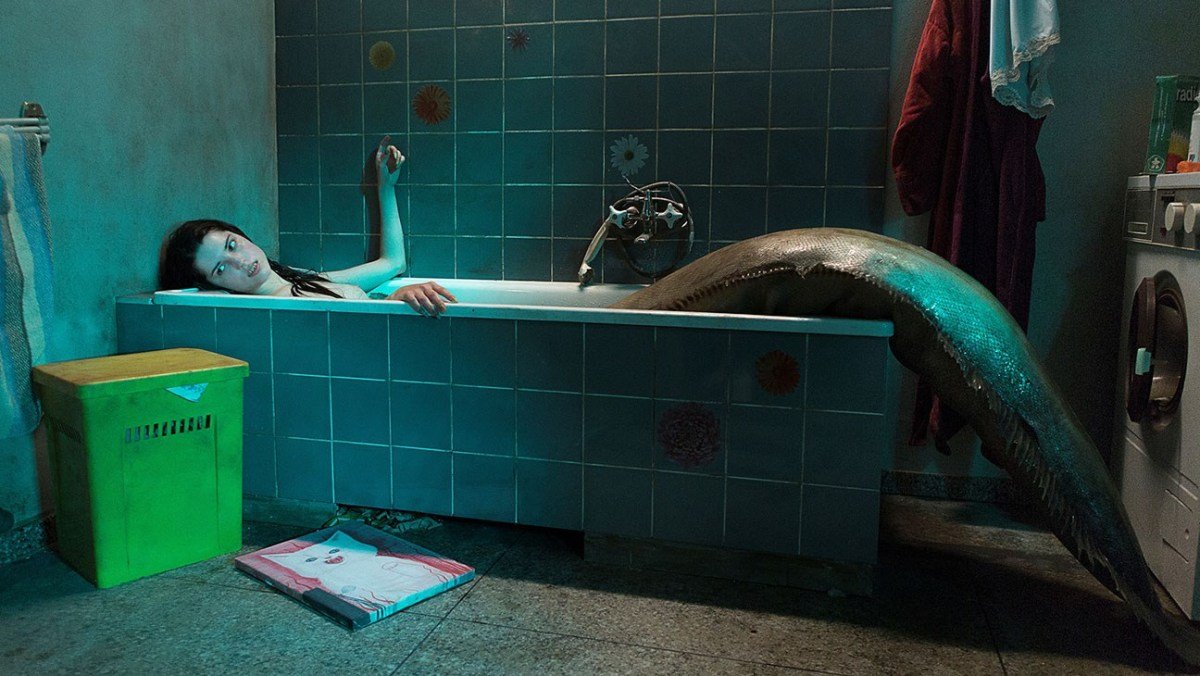 The strangest take on the Hans Christian Anderson fairy tale “The Little Mermaid” ever put on the screen, The Lure (Poland, 2015) is a musical-horror-fantasy-romantic tragedy from Poland about mermaid sisters with a taste for human flesh.

Like the sirens of Homer’s “The Odyssey,” Silver (Marta Mazurek) and Golden (Michalina Olszanska) are feral creatures who lure male victims to the water with their seductive smiles and eerie song and then devour them with razor-sharp teeth. But apparently they also yearn to see what it’s like up on land so they get their land legs (but not, curiously, genitalia) and take a walk among what they used to consider dinner. These aquatic vampire sisters are just girls at heart, it seems, and with the help of an aunt (Wokalistka Krysia) who has made a life on land with a somewhat shady nightclub owner, they get a job as back-up singers in a flashy cabaret act. Their voices are hypnotic but the real draw of the stage show is spectacle: they strip off their costumes and leap into a tank of water to grow back their tails for the finale. Once predators, these girls are now exploited but are too dazzled by the wonders of modern distractions to care.

It’s a charge to see how filmmaker Agnieszka Smoczynska (in her feature debut) reworks the details of the Hans Christian Anderson fairy tale with a feminist perspective. The sisters lose their power along with their tails (which are slick and slimy like an eel) in this man’s world, and they are incomplete in their human incarnations. Smoczynska forgets the Disney version and embraces the tragedy of the original story as the more innocent of the two sisters falls for a musician (never trust a bass player) and gives up her fins and her voice for legs in a scene that careens into medical horror.

She tosses in social satire (there’s a splashy musical number in a department store celebrating the joys of consumerism) along with energetic musical numbers (the songs, by Barbara and Zuzanna Wrońskie, are delightful) and a visual style that bounces from glitzy show biz set pieces to horror movie imagery to the drab urban gray of life in modern Poland. It’s an intoxicating world for the undersea dwellers but it’s not their world and the compromises they make might just destroy them.

In Polish with English subtitles.

Not rated, features nudity and weird and gory imagery.

The Criterion Channel presentation also includes a 40-minute documentary on the making of the film, two short films from director Agnieszka Smoczynska, and deleted scenes.

, iTunes, GooglePlay and/or other services. Availability may vary by service.
The Lure [Blu-ray]

Criterion’s special edition Blu-ray and DVD release includes a 40-minute documentary on the making of the film, the short films Aria Diva (2007) and Viva Maria! (2010) from director Agnieszka Smoczynska, and deleted scenes (all in Polish with English subtitles), plus a booklet with an essay by novelist, playwright, and storyteller Angela Lovell.

Pingback: What to stream: 'Wonderstruck' on Amazon, the complete 'ER' on Hulu, 'Dallas Buyer's Club' on Netflix, and more - Stream On Demand
Comments are closed.