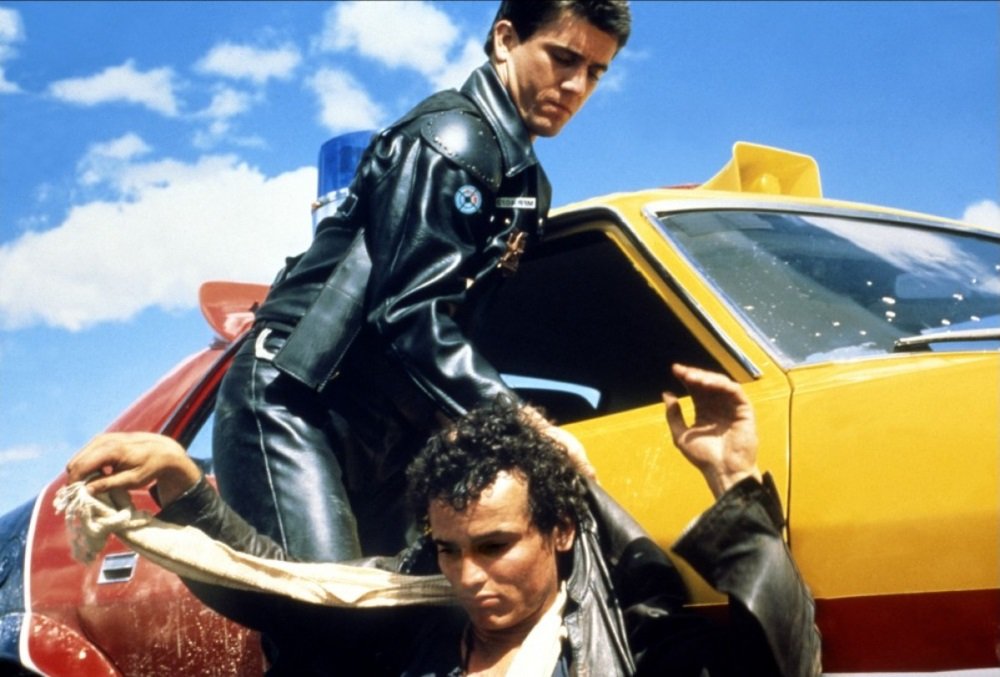 The original Mad Max (1979), George Miller’s grungy 1979 revenge flick, was an international smash when American International Pictures—the kings of the drive-in movies who spawned Roger Corman, teen horror, and biker films—acquired the film and replaced those Aussie accents with good ol’ American talk. It never really hit in the US and it’s hard to fathom why: Mad Max is classic B movie exploitation.

An impossibly young, baby-faced Mel Gibson plays both rebel and reliable family man as a cool cop in black leather and a souped up V8 whose specialty is playing chicken with revved up road pirates. It’s “a few years from now” in a world on the verge of social breakdown and the street becomes the battleground between cop and criminal. When Max’s wife (Joanne Samuel) and child are murdered by a horde of sleazy bikers, he turns rogue and transforms his car into a vehicle of vengeance. Think Death Wish by way of Death Race 2000.

In the wake of its sequel, the colorful comic book come mythic post-apocalyptic epic The Road Warrior, it looks a little cheap and raw, and the bombastic score suggests a humorless seriousness that Miller’s often witty direction belies. He bounces between macho cliché and outrageous exaggeration, never quite abandoning one for the other, spicing with car chases and screeching wrecks staged with confidence and kinetic flash.

It’s a tough little piece, just a little grimy, full of ambiance (love the crumbling sign over “Hall of Justice”) and attitude and occasionally sparked by an inspired flourish. Mad Max is no The Road Warrior or Max Max: Fury Road but it is an eminently road worthy picture in its own right and it spawned a legacy that continues to this day.

Shout! Factory’s special edition Blu-ray features new interviews with stars Mel Gibson and Joanne Samuel and director of photography David Eggby plus the extras for the earlier release: commentary by Eggby, production designer Jon Dowding, and special effects artists Chris Murray and Tim Ridge, the vintage featurettes “Mad Max: The Film Phenomenon” (25 minutes) and “Mel Gibson: The Birth of a Superstar” (16 minutes), still galleries, and trailers and TV spots. Like the previous releases, it includes the original Australian soundtrack (both in 5.1 remix and mono) and the American dub soundtrack.