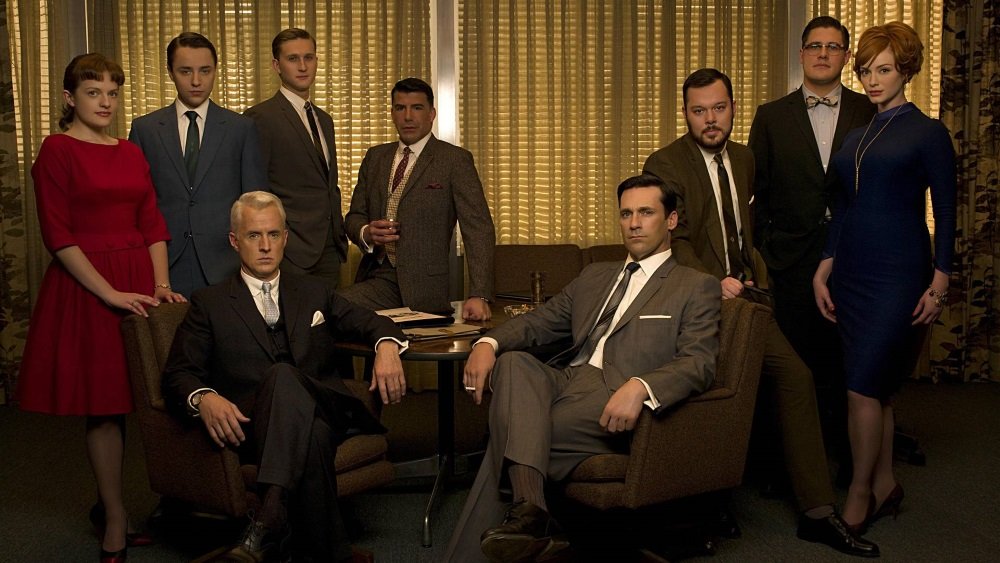 “Who could not be happy with all this?” That’s the question at the heart of Mad Men (2007-2015), the series that transformed former movie network American Movie Classics into cable channel AMC, home to smart, daring, addictive original TV shows.

Set the way-back machine to 1960, a world of cigarettes and martinis and highballs, where successful businessmen have wet bars in their offices mothers don’t worry about seatbelts for the kids and married men treat flirtation with secretaries and waitresses as a God-given right. As season one opens, Don Draper (Jon Hamm), the suave, successful, supremely confident creative director at a Madison Avenue advertising firm, should be on top of the world. The ostensibly happily married family man is having an affair (and begins another before the season is over) while his wife Betty (January Jones) is on the verge of a nervous breakdown because she can’t figure out why her home and family and security leave her so empty.

In addition to Draper, a character whose carefully groomed identity covers up a dramatic sense of denial, and his fragile wife, we get a rich cast of characters with their own dreams and aspirations and seriously screwed-up dimensions: Peggy Olson (Elisabeth Moss), a young working girl from Queens in her first professional job; Joan Harris (Christina Hendricks), the queen of the secretarial roost; Pete Campbell (Vincent Kartheiser), the arrogant young junior executive who keeps bumping up against Draper and the firm’s senior partners, Roger Sterling (John Slattery, the show’s most underrated asset) and the old man himself, Bertie Cooper (Robert Morse). Ambitious young hotshot Pete is the only one in the firm who sees past the accepted wisdom of the entrenched ad man, who take it for granted that middle class men make the buying decisions that drive commerce, and grasps the exploding power of youth culture and the rise of young adults and teens as a driving, defining force in the marketplace and in the culture.

Created by Sopranos veteran Matthew Weiner, Mad Men became the water cooler show of its day with echoes that reverberated far past its immediate viewing audience. While the surface details of fashion and design are dead on, this is no exercise in nostalgia, but a richly drawn look at the social roles, sexual identity, and disenchantment with the façade that is the American Dream. The portrait of male and female social roles and sexual identities—as understood by themselves and one another—is brilliant, and the final episodes of the season push the insight into daring and fascinating territory.

Season two leaps ahead two years and the times are a-changin’ faster than the advertising executives of Sterling Cooper can fathom. Don is sliding so precipitously into depression and distraction that he goes AWOL from a business trip and his once fragile wife has become a steely suburban princess with her own wandering eye. The season touches on the rise of youth culture, the civil rights movement and the frustrations of modern women in the chauvinistic business culture holding on to the fifties but it’s still about identity and self-definition in a culture ready-made with labels and expectations.

In Season Three, Sterling-Cooper is sold to a British firm and the marriage of Don and steely suburban princess Betty unravels under his cheating and her frustration. The characters all seem to get mired in frustration (much of at the hands of the cost-cutting British overlords whittling down Sterling-Cooper for a sale) and it tends to put a damper on the drama as well, at least until the final episodes, when Don steels himself to make a change and brings along a small crew of conspirators (who just happen to be the most interesting characters from the firm). The energy that buzzes through the final episode isn’t just the daring of their plan and the momentum of the episode, it’s the feeling of these characters rousing themselves to a challenge and being inspired by new possibilities. Jared Harris joins the team as the British partner who is socially awkward in the American vernacular.

The sense of optimism and excitement that ends the third season smacks into the reality of starting an independent business as Season Four begins, as the newly-divorced Don, now a partner in a young firm, tries to put on the successful face to the public while struggling to make payroll on a few accounts that barely keep them running. It’s hard there for an independent, especially when their biggest client pulls out and the company faces the threat of collapsing, and it’s harder when Don doesn’t consult with his partners before taking chances with bold moves and aggressive techniques. One of the most challenging and interesting storylines belongs to Don and Betty’s schoolgirl daughter Sally, who becomes a full-blooded character with as many anxieties and frustrations as the adults as she collides with Betty, and Kiernan Shipka delivers one of the best performances by an actor her age I’ve ever seen. Her story becomes a central as the adults from this season on.

Season Five finds Don in a new marriage to a beautiful young wife, Megan (Jessica Pare), and silver fox and team schmoozer Roger Sterling (John Slattery) and ambitious barracuda Pete in a power struggle, but the two join forces in the most discussed episode of the entire series: “The Other Woman,” where the partners (over the objection of Don) make Joan an offer that today would invite a lawsuit. It became the water-cooler TV moment of the year, and not just for the salacious drama at the center of the episode. It’s one thing to think of Pete as a pimp, another to see him literally become one, from the smug way he makes Joan a modest proposal in her own office (oblivious of how utterly monstrous his behavior is) to the sales pitch to the (all too willing) partners to make Joan a cash offer to sleep with a big client. Don’s disgust does nothing to shut the conversation down.

It started a lively dialogue about the reality of sexual politics in American business life of the era and a lot of women who faced discrimination, condescension, and sexual advances while starting careers in the fifties and sixties were inspired to share their experiences. But there’s so much more to this episode, from how badly Don has misjudged his power in the partnership to Peggy’s decision to leave the agency and Don’s amazing farewell scene, where he goes through all the stages of grief in seconds and ends with a sincerely chivalrous gesture of respect and admiration. Everything changes here, not necessarily better or worse but with decisions that change the course of their lives, and that’s part of why the show is so good.

Season Six drags the partners and creatives into the heart of the 1960s, where they are still hopelessly the establishment trying to get a handle on the new culture. Don responds in the usual ways—he chafes at the independence of his young wife, has an affair with his upstairs neighbor (Linda Cardellini), and blithely sabotages a relationship with a problem client—and ends up merging the firm with a rival, which brings Peggy back into the fold. Meanwhile marriages end, relationships sour, and a speedball-fueled weekend work session sends the old guard on a bender.

Like Breaking Bad before it, Mad Men splits the seventh and final season into two parts, essentially making two short seasons of it, the first set in 1969, where Don tries to work his way back into the good graces of the company he helped build (and then sabotaged with his impulsive actions), Peggy evolved into his creative equal, and senior partner Roger (John Slattery) flirts with counterculture drugs and free love until he mans up to become a true leader in the firm. The final seven episodes takes the show into the seventies and brings closure to the characters as the firm they created is bought up and their freedom curtailed, which each of them deal with differently.

The series, which put AMC on the map as a purveyor of smart, compelling TV, was a critical darling for its entire run and, like HBO’s The Sopranos, a show with an influence beyond its immediate viewership. Through the lens of the past it tackled issues of sex, race, social roles, sexual identity, marriage, parenthood, and disenchantment with the American Dream. The final episodes offers a satisfying conclusion that brings each of its characters a sense of accomplishment and even happiness. And in a bit valedictory validation, Jon Hamm finally won a well-deserved Emmy Award for his defining performance as Don Draper, one of the most interesting characters on TV.

It also won the Emmy for outstanding drama series four years in a row, among its many Emmy Awards.

Also on Blu-ray and DVD and on SVOD through Amazon Video, iTunes, GooglePlay, Fandango, Vudu and/or other services. Availability may vary by service:
Mad Men: The Complete Collection [DVD + Digital]