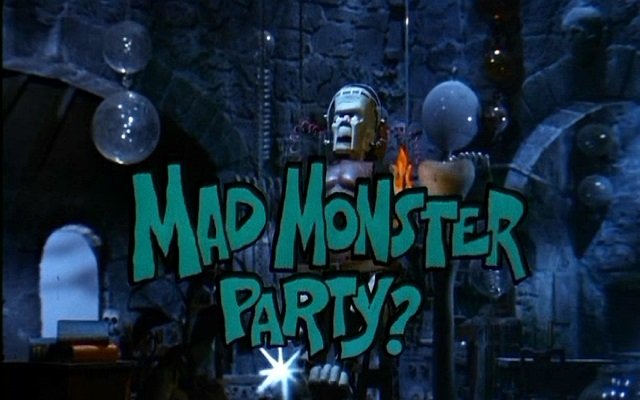 Everyone is familiar with the landmark horror classics. This is one in a series of suggestions for Halloween viewing that may not be so familiar, including titles that teens and tweens (and in some cases adolescents) can watch without breaking the R-rating.

The title (which, yes, properly has a questionable question mark) says it all: “Uncle Boris” von Frankenstein (voiced by a paternal Boris Karloff) invites the monsters of moviedom, from Dracula to the Invisible Man, along with his white-sheep nephew Felix, a naïve klutz with a passion for science and the willful ability to treat the Wolfman as a puppy dog, to his island castle for a passing of the torch.

The pun-filled concoction is stuffed with sight gags and one liners (give partial credit to former “Mad” magazine writer Harvey Kurtzman and monster movie maven Forrest J. Ackerman, who were called in to give the script a little jolt) and quasi-adult asides (the va-va-voomish Francesca—the closest Rankin and Bass ever got to a real sex doll—gives a toned Mae West line to Felix when he remarks on her unexpected weight: “I wanted to show you I was no easy pickup”). The eclectic soundtrack see-saws from the standard Rankin-Bass sing-along styled, banjo-based “You Gotta Stay One Step Ahead” to the groovy pseudo-rock groove “Do the Mummy” to the James Bond vamping theme song (sung by Ethel Ennis in a Shirley Bassey impression).

Hilarious? Not always, but the mix of innocence, stop-motion slapstick, off-beat spoofing, and just plain goofiness is a lot of fun, and sometimes the sheer absurdity of it all can sneak up on you. Phyllis Diller is unmistakable as the Monster’s Mate (the figure was obviously modeled on the real life comedienne, and she calls the Monster “Fang” throughout), and Gale Garnett and Allen Swift provide additional voices.

The DVD and Blu-ray special edition releases include a fine retrospective featurette with producer Arthur Rankin and voice artist Alan Swift and Rankin/Bass historian Rick Goldschmidt, plus featurettes on the stop motion techniques and the music of the film (with composer Maury Laws).