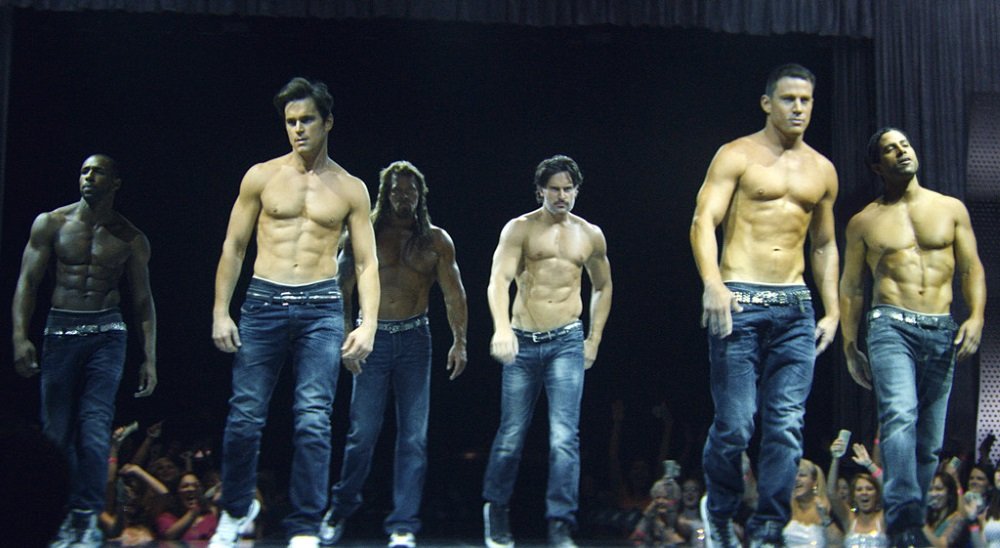 In Magic Mike XXL (2015) Channing Tatum reunites with the old gang (minus Matthew McConaughey and Alex Pettyfer, who have abandoned them for a new venture in the Far East) for one last blast.

It’s been three years since Mike left to start his own business and he’s struggling, but when he’s lured to a reunion (thanks to a little subterfuge) he proposes they team up and go out on top at a male stripper convention in Myrtle Beach, S.C. It’s a buddy comedy, a road movie, and a story about teamwork and creative passion (Mike convinces them to toss out the tried and true acts and create something new that reflects who they are now, not what they’ve done), all in a film about beefy guys who take their clothes off in elaborately-choreographed performances where success is measured in the squeals of female audiences and the showers of folding green that comes raining down (or is slipped into their shorts).

Tatum and the cast (returning colleagues Joe Manganiello, Matt Bomer, Kevin Nash, and Adam Rodriguez, plus new additions Stephen Boss, aka tWitch, and Donald Glover) bring an easy-going camaraderie to the reunion and infectious energy to their performances. They are good company and sustain the film, which rides a wisp of a plot to explore male friendships and aspirations while enjoying one last fling as performance artist-as-sex object. It really shouldn’t be as good as it is, but there you go.

Gregory Jacobs, a longtime producing partner of Steven Soderbergh (who directed the first Magic Mike) makes his directorial debut on the film and Soderbergh keeps his hand in as cinematographer and editor (under the pseudonyms Peter Andrews and Mary Ann Bernard) as well as producer.

It is, of course, rated R, but there is no explicit nudity.

Also on Blu-ray and DVD and on SVOD through Amazon Video, iTunes, GooglePlay, Vudu and/or other services. Availability may vary by service.
Magic Mike XXL [DVD]