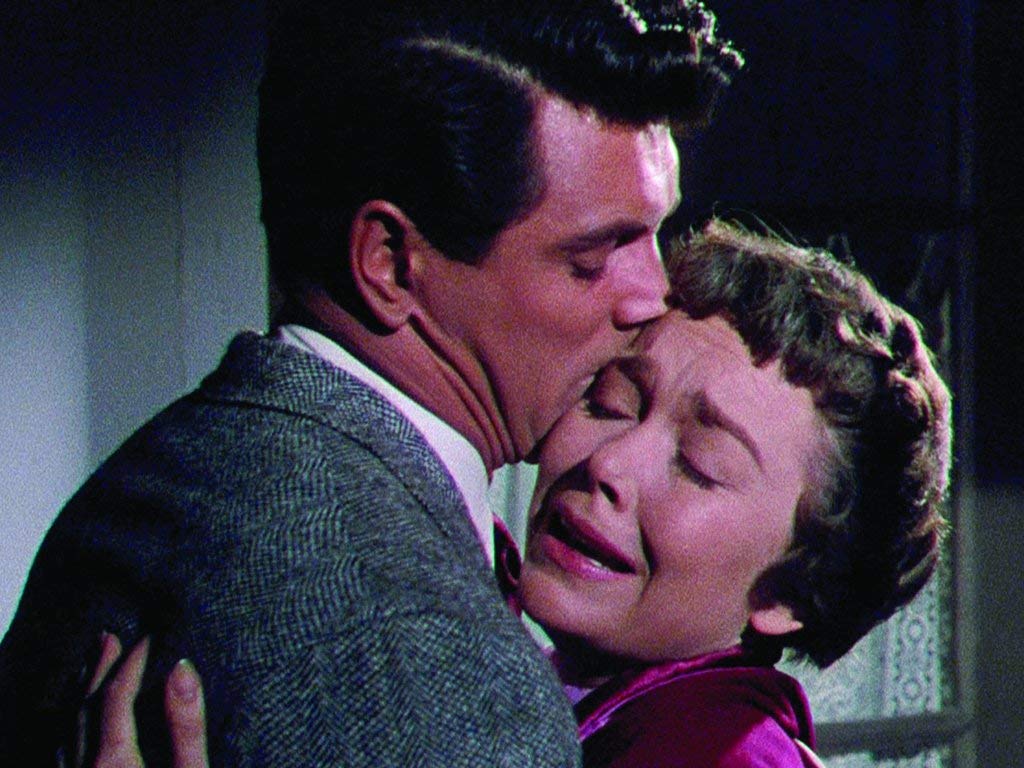 Jane Wyman’s Helen Hudson is the widow of a self-sacrificing surgeon. Rock Hudson’s Bob Merrick is an arrogant millionaire playboy whose reckless ways and attitude of entitlement indirectly lead to the death of Helen’s husband and to an accident that leaves her blind. The “magnificent obsession” of the title refers to a spiritual philosophy of secret charity and self-sacrifice that paternal painter and sage mentor Edward Randolph (Otto Kruger) passes on to Bob. The references to Christ and the swell of a heavenly choir every time this ideal is discussed makes the religious origins clear but the dialogue keeps the ideal in a secular framework and, as far as director Douglas Sirk is concerned, the film remains in the mortal world of love and loss and human redemption.

Magnificent Obsession (1954), adapted from the novel by Lloyd C. Douglas (previously made into a 1935 film), is the first of Sirk’s great Hollywood melodramas, a romantic tale of hubris and loss and sacrifice and rebirth in a rarified Technicolor world of storybook-pretty homes and sun-dappled preserves of nature. The setting is the lakeside village of Brightwood, part idyllic, unspoiled small town, part playground for the rich, all wooded and bright, but apart from a few location shots, the Eden-like town is artificially created in the movie studio to give the director a painter’s control of his portrait’s landscape. And paint he does, embracing the unreal hues and constantly playing with his light as if he was directing a piece of expressionist theater, while never breaking the spell of his heightened world of American affluence and emotional turmoil.

Bob is the classic man-child who faces the emptiness of his self-absorbed life and redeems himself by returning to his medical studies and secretly doing good deeds with his fortune. But for all his pursuit of Helen, he’s in many ways the object of desire (Hudson was younger than Wyman and a Hollywood figure of bland male beauty) and Wyman’s Helen is the character that the audience identifies with. Bob’s sacrifice is all about time and money and effort, leaving behind a life of wasteful pursuit of pleasure and thrills to embrace a life of service and the personal satisfaction that brings. Helen keeps up a show of pluck and perseverance while enduring one tragedy after another, and then sacrifices her own happiness so as not to be “a burden” or an object of pity.

It’s utterly irrational on the surface, a plot of contrivances for our characters to suffer through and come out the other end “earning” their ultimate happiness. Sirk’s response is to embrace the emotional responses. His unreal exaggerations offer a fantasy world of beautiful people and tortured emotions and grand sacrifice to the altar of love.

Audiences willingly and eagerly surrendered to such grand and glorious American operas then. Today we don’t look past Sirk’s exaggerations, we see them as a surreal heightening of the conventions into an expressive theatricality. It makes his cinematic arias just as irresistible today.

Agnes Moorehead co-stars. Wyman earned an Oscar nomination for her performance and was reunited with co-star Hudson and director Sirk the next year in All the Heaven Allows.

A longer version of this review is at Parallax View

Criterion’s two-disc edition is beautifully mastered from an excellent print, sharp and clear and saturated in the magnificent hues of Technicolor (apart from a few brief shots, lasting only seconds, of soft, oversaturated film from what appears to be an inferior dupe print). The commentary by film scholar Thomas Dohery is well researched and prepared, and his presentation is engaging and accessible and Allison Anders and Kathryn Bigelow offer tributes to Sirk and his influence on their work in short video interviews. The second disc features the original 1935 adaptation of the Lloyd Douglas novel directed by John Stahl and starring Irene Dunne and Robert Taylor and the 1991 feature-length documentary From UFA to Hollywood: Douglas Sirk Remembers, featuring on-camera interviews with Sirk. The accompanying booklet features an essay by Geoffrey O’Brien.