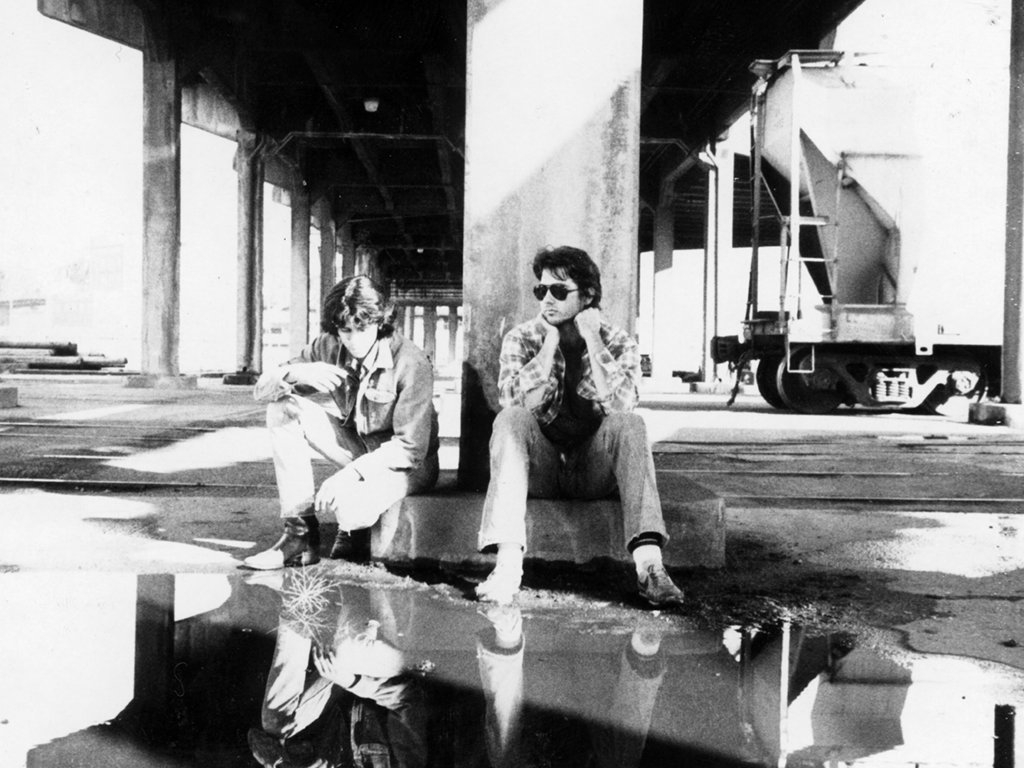 Walt (Tim Streeter), a counter jockey at a grimy liquor store in Portland’s skid row, is gripped by unrequited lust for Johnny (Doug Cooeyate), an illegal Mexican immigrant with fleshy lips, a wide, youthful grin, a streak of juvenile machismo, and a sneering attitude toward Walt’s gay advances. Van Sant observes their dance of desire and rejection and wary coexistence without judgment, more interested with the social currency exchanged between the adoring Walt and the contemptuous Johnny, who nonetheless deigns to pal around with Walt for little favors, like a turn behind the wheel of Walt’s car (which pilots with the reckless mania of a teenager on a video game). Despite his crush on this pretty boy (“He says he’s 18, but he’s probably 16,” Walt confesses, and Johnny acts like it), Walt is surprisingly likable, a genial and generous guy who endures Johnny’s taunts and insults just to be near him.

Mala Noche is a study in infatuation and rejection, euphoria and frustration, and Van Sant observes their dance of desire and dismissal and wary coexistence without judgment. But it’s also a portrait in life on the streets, of survival on the lowest rung of the social ladder. Even Walt, who is just getting by on a couple of crummy jobs in the worst part of the city, knows that his life seems privileged compared to the hardships of Johnny and his buddy Pepper (Ray Monge), looking for work without papers or any fluency with English.

Shot on 16mm in dreamy black and white on a tiny budget of $25,000, it’s a true American indie made before the term was ever coined, let alone used as a marketing hook. It’s a modern beat movie of lust and friendship and unrequited love among the down-and-outs. And it’s also a groundbreaking landmark of queer cinema thanks to its offhanded acceptance of a gay character as a protagonist. Walt’s homosexuality is a given, a simple matter of fact, rather than a statement. Rare enough at the turn of the 21st century, it was unheard of in 1984 when Van Sant shot the film on the streets of his adopted home of Portland, Oregon.

Mala Noche also captures a unique atmosphere in Portland’s run down Northwest area of transient motels and aimless days of a homeless, jobless population loitering the streets, and puts it on screen with gorgeous black and white imagery. Decades later it is just as remarkable a film and impressive an achievement, both a time capsule of a slice of eighties culture and a prescient approach to queer cinema more modern and timely than the breakthrough gay films of the late 1980s.

, iTunes, GooglePlay and/or other services. Availability may vary by service.
Mala Noche (The Criterion Collection) [DVD]

The film made its long-awaited home video debut on Criterion’s DVD in 2007. The disc preserves the rich palette of the 16mm production, from the lush gray scale of the crisply shot daytime scenes to the dynamic chiaroscuro of night scenes and interiors. Gus Van Sant talks about the origins and production of the film in a 24-minute interview featurette. Among other details, he explains that Doug Cooeyate (who plays Johnny) is a middle class kid of Native American ancestry who spoke no Spanish. That explains the odd credit: Arturo Torres as the voice of Johnny. Also features the documentary “Walt Curtis: The Peckerneck Poet” directed by Portland animator and filmmaker Bill Plympton, a gallery of Van Sant’s storyboards, and the original trailer, plus a booklet featuring a new essay by Dennis Lim.