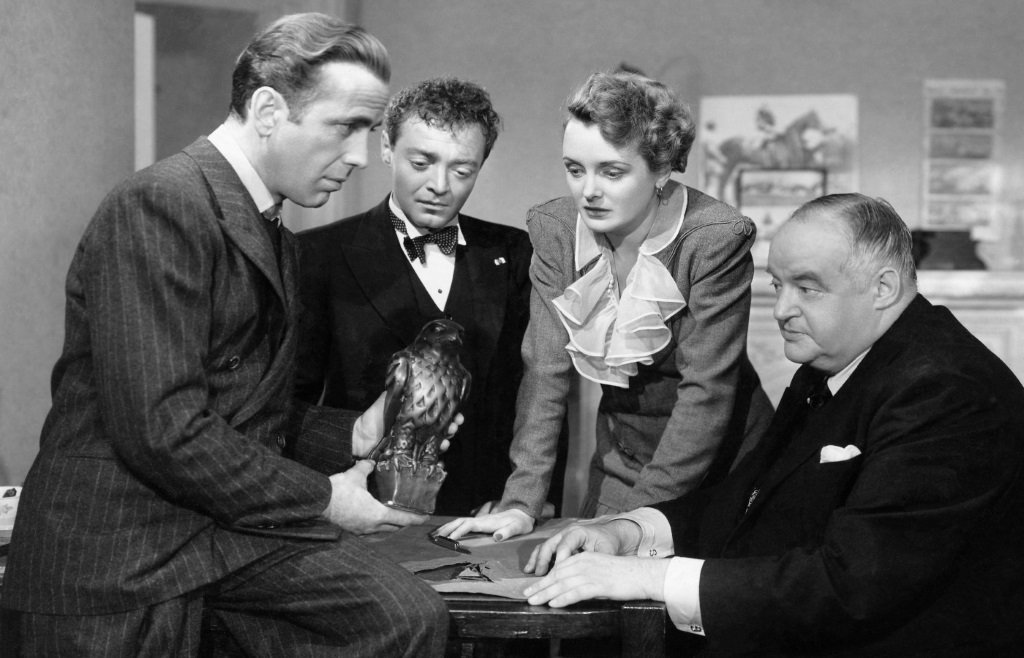 If there is a cooler, tougher, more shrewd and self-sufficient private detective in the movies than Humphrey Bogart’s incarnation of Sam Spade in John Huston’s note-perfect adaptation of Dashiell Hammett’s The Maltese Falcon (1941), I’ve yet to see him in action.

The 1941 classic wasn’t the first screen version of Hammet’s iconic novel, but it was the first one get the hardboiled toughness of the story and the utterly amoral universe of double-crossing characters right. Huston, who made his directorial debut with this production, reportedly blocked passages of the book directly into script form, but getting Hammett’s dialogue and attitude right was only part of the challenge. He had to cast an actor who could back up those words.

Enter Humphrey Bogart, a veteran character who was just breaking out of a career playing villains and supporting parts. His lisp, the result of an injury to his lip, added a distinctive edge to his gravelly voice, and his weathered gravitas gave Spade the look and feel a man schooled in hard knocks.

This Spade is no stranger to the guile of shady clients and colorful suspects and there isn’t a more iconic cast of characters in the movies than this rogues gallery. And I do mean characters. This cast of unusual suspects is distinctive and quirky, and brought to life by actors who fill out their eccentricities and mannerisms with gusto.

They make for a vivid vipers nest of double-dealing thugs and con artists on the trail of a treasure. What they get is the sour twist of a cosmic joke and Spade is the only one smiling. It was one of the first films in the noir tradition and a template for hardboiled private eye films to come. One of the greatest creations of the Hollywood dream factory, The Maltese Falcon really is the stuff dreams are made of.

It was nominated for three Academy Awards, including best picture and screenplay, and was added to the National Film Registry in 1989

, iTunes, GooglePlay and/or other services. Availability may vary by service.
The Maltese Falcon [Blu-ray]

On Warner Blu-ray and DVD. The Blu-ray features commentary by Bogart biographer Eric Lax, three radio play adaptations (two starring the original cast, a third with Edward G. Robinson), a “Warner Night at the Movies 1941” collection of short subjects, cartoons, and trailers, and a 1941 studio blooper reel. There’s also a three-disc special edition featuring the first two adaptations—the 1931 pre-code The Maltese Falcon directed by Roy Del Ruth, with Ricardo Cortez as a smiling Sam Spade, Bebe Daniels as Ruth Wonderly (the Brigid O’Shaughnessy role), and Dwight Frye (of Frankenstein and Dracula fame) as Wilmer Cook; and the 1936 Bette Davis vehicle Satan Met a Lady, with the suave Warren William as the renamed detective, Ted Shayne, plus the supplements of the Blu-ray.