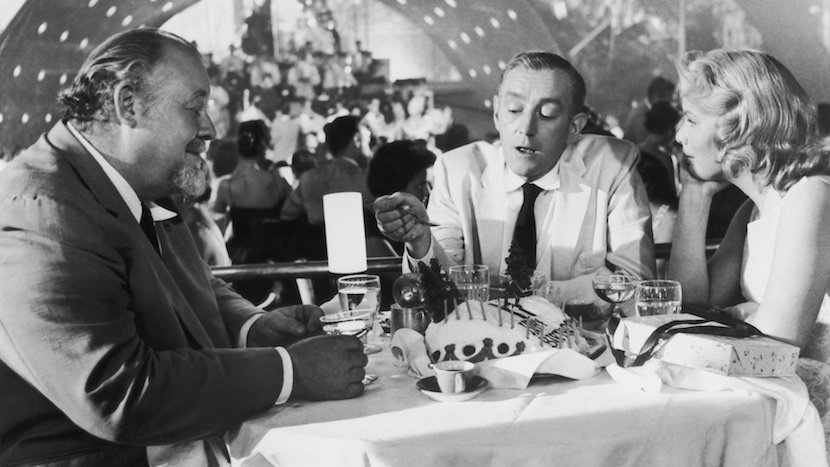 Our Man in Havana (1959) (Twilight Time, Blu-ray) is the third and final collaboration between director Carol Reed and writer Graham Greene. In some ways it plays like a sardonic post-script to their great success, The Third Man, in others a transition film between the gritty but heroic espionage thrillers of the forties and fifties and the far more ambivalent and skeptical work of John Le Carre, as seen in The Spy Who Came in from the Cold just a few years later. (Le Carre’s The Tailor of Panama spins an updated version of the same basic story of Havana.) The big difference is tone: Our Man in Havana is a lampoon of international espionage games and the gullible officers running Britain’s MI6 like an old boy’s club. Everyone on their honor and all that.

Alec Guinness is Jim Wormold, the meek British everyman in Batista’s Cuba and a single father trying to keep his pretty, spoiled teenage daughter (Jo Morrow) safe from the wolves prowling the streets of Havana. Reluctantly drafted by a British Secret Service agent (perfectly droll Noel Coward), he finds he’s a lousy agent but a terrific author and, failing any legitimate intelligence, he spins a doozy of a secret agent yarn, complete with a cast of supporting agents (all in need of generous expense accounts) and a secret installation worthy of a James Bond villain. It’s a veritable cash cow but it also brings unwanted attention from the head of British Intelligence (a dryly officious Ralph Richardson) who sense him a staff to expand his operations (including neophyte secretary Maureen O’Hara). The satire of gullible intelligence officers and corrupt politicians (an oily, somewhat sinister Ernie Kovacs as the soft-spoken terror Capt. Segura) take a darker turn when the fantasies spun by Wormold take root in the spy community, leaving real victims in its wake. Our man in Havana a target of enemy agents and his apolitical best friend and drinking buddy, the world-weary German expatriate Dr. Hasselbacher (Burl Ives), gets caught in the middle of the intelligence turf war.

Reed deftly directs Greene’s dryly witty dialogue—while the film doesn’t directly comment on the politics of Cuba, the corruption and totalitarian power of the government and its police (as embodied by Kovaks) are suggested in comments tossed off in the course of banter—and brings a snap to the repartee and a very real sense of danger to the climax. It’s when he tries to mix the two that he’s on wobbly ground, but if tone is inconsistent, the atmosphere is marvelous. Reed shot on location in Havana after the fall of Batista (Castro gave the film’s scathing portrait of the previous regime his approval) and fills the film with scenes in the streets and bars and exclusive retreats of the very wealthy. Oswald Morris shoots in black-and-white CinemaScope and crisply captures the buzzing atmosphere of Havana, which he plunges into shadow for the nighttime climax. The well-mastered disc looks crisp and clean.

Features a trailer and Twilight Time’s trademark isolated score and accompanying booklet with an essay by Julie Kirgo. Limited to 3000 copies.