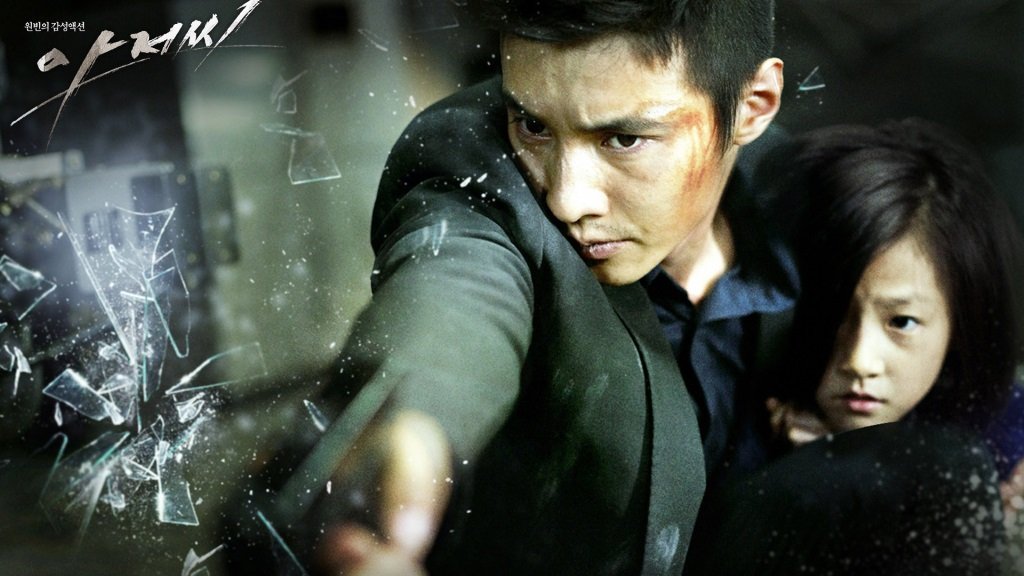 The Man from Nowhere (South Korea, 2010) – South Korea’s top box office hit of 2010 is as slick and swift an underworld thriller as you’ll find.

Matinee idol Won Bin (of Bong Joon-ho’s Mother) is a shaggy pawn shop proprietor in a miserable slum hiding from his past life as a highly-trained government agent and super-spy behind a greasy mop of hair. There are fiercely dedicated young cops on the trail of the drug ring, ruthlessly violent criminal gangs at war over the drug trade, a single mom nightclub dancer on the needle who rips off the mob and her adorably spunky young daughter, who manages to keep her spirit in the face of all the misery around her and refuses to give up on the enigmatic pawn shop man, her only friend in the world. When she’s kidnapped by the Chinese gangs muscling into the drug trade, that’s the last straw.

He shaves his head, doffs his shirt, and goes on a rampage, never once dropping his stony expression. The killing machine of old is back, and he’s not content to just kill these gang members. He punishes them, making sure they suffer before they die, sometimes slowly, always painfully.

Director Lee Jeong-Beom sets this violent, visceral crime thriller of brutal cops and inhuman gangsters in a twilight underworld of drugs and human trafficking, where most of the action takes place at night, often in dungeon-like interiors of abandoned buildings and slum hovels, always in the shadows. The cops here aren’t corrupt but they can be brutal, and they are remarkably out of the loop despite all the resources at their disposal. They know more about Cha, despite the military lock on his record, than they do about the criminal organization they have been shadowing for months, and while they get in his way, they are no more than an inconvenience for the one-man army. The rest is predictable stuff, from an icy assassin with a touch of humanity about him to the colorful psychos in flashy duds who laugh their villainous laughs as they wallow in brutality… until our hero comes around to exact retribution.

South Korean action cinema can be dour and humorless compared to the self-aware American action films and its one-liner punctuations, but at its best it has an impressive mix of sleek style, slick action, and charismatic stars. While hardly original, The Man from Nowhere is satisfying: well-constructed, slickly executed, suitably dark and dangerous, and filled with well-honed, visceral action scenes. Plus an enigmatic action hero with all the style of a runway model.

Rated R (for drug use, nudity, and violence), in Korean with English subtitles.

Add to My List on Peacock or to My List on MUBI or stream free on Kanopy, which is avaiable through most public and college library systems.

, iTunes, GooglePlay and/or other services. Availability may vary by service.
The Man from Nowhere [Blu-ray]

The Man From Nowhere [DVD]

The DVD and Blu-ray from Well Go is in Korean with English subtitles and an optional English dub soundtrack, and both editions feature a Korean language “Making of” featurette, a montage of action highlights and the trailer.