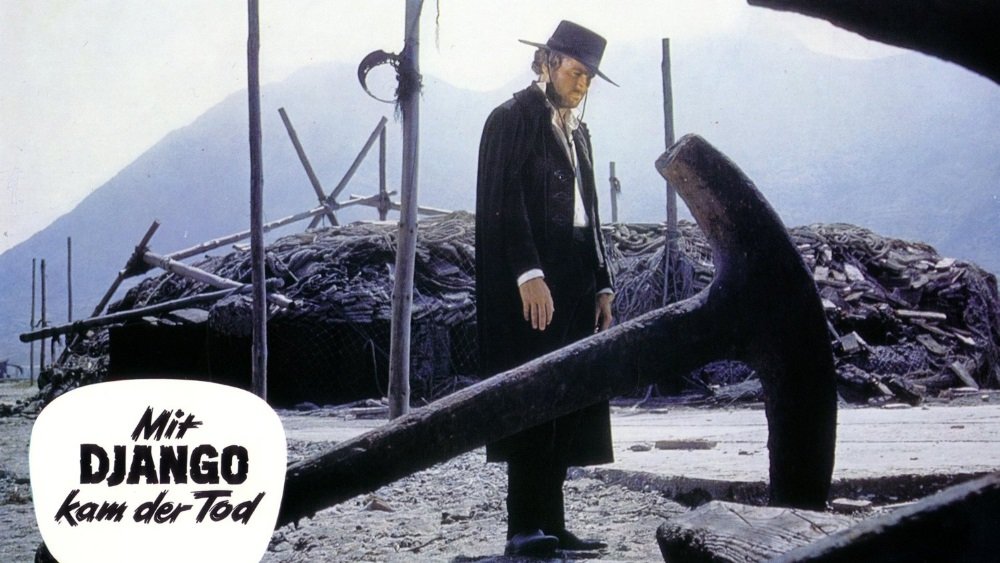 Man, Pride and Vengeance (Italy, 1967) – There were hundreds of spaghetti westerns produced by Italian studios in the sixties and early seventies. Only a small percentage of them were particularly good, and fewer still genuinely great. You’d think we’d be running out of discoveries by now but Man, Pride and Vengeance (1967), from director Luigi Bazzoni and star Franco Nero, is a respectable find. Based on the novel Carmen by Prosper Merimee, with Nero as the loyal, straight-arrow soldier José demoted after he’s tricked by gypsy hellion Carmen (Tina Aumont), it’s the rare spaghetti western that is actually set in Spain, where it was shot.

In this take, José has no fiancée to betray, which perhaps makes him more susceptible to Carmen’s flirtations, and Nero plays him as an affable career man whose equilibrium is completely upset by the surge of emotions—lust, rage, resentment, jealousy—that the wild free spirit brings out in him. Aumont makes a cheeky Carmen, not malicious so much as unapologetically mercenary and sexually independent but with a code of conduct that she follows faithfully. She pays her debts, which complicates José’s life more than he can handle. Soon he’s on the run from a murder charge and joins her criminal gang, where he meets her husband Garcia (Klaus Kinski), fresh out of prison and ready to take charge of the gang and take on anyone he sees as a threat. While José earns the nickname “Preacher” for his insistence on a disciplined plan and a non-violent execution of the stage robbery (both a moral and practical decision; murder brings out the soldiers in force), Garcia is like unstable dynamite pulled from the storage of a long prison sentence and ready to blow at the slightest nudge.

Things take a more savage turn when it leaves the city for the frontier, a dusty, desolate landscape of threatening hills, chalky trails, and sunbaked days that (along with Garcia’s taunting and baiting) eat at the gang as they hide out in primeval caves. But this isn’t about barbarous cutthroats picking off rivals. Bazzoni wrote the screenplay with Suso Cecchi d’Amico, one of the great screenwriters of Italian cinema (Bicycle Thieves, Miracle in Milan, Big Deal on Madonna Street, The Leopard, and many others), and they give the characters more complexity. These aren’t the bloodthirsty thugs who feed off of violence and chaos, merely folks born to this way of life, and they have their own moral codes and clan loyalties. In this Darwinian setting they provide an unexpected humanity and a contrast to José, whose own code is swamped by his emotional impulses outside of his military home. And best of all, Aumont’s Carmen is fascinating, a woman who pays her debts and honors her obligations, lives and loves as she chooses, and never apologizes for her choices. Aumont hasn’t the strength to give Carmen much depth but she does instill her with a lively spirit and a fierce way of taking life head on.

The film was also released under the title With Django Comes Death, just another of the scores of movies trying to cash in on the iconic hit. This one at least stars the original Django himself, even if the sensibility is as far from the cold justice and pitiless violence of Django as can be.

Amazon presents the English language version of the film. Add to watchlist.

On disc and SVOD through Amazon Video

and other services. The restored DVD and Blu-ray from Blue Underground includes both Italian and English versions, with commentary and a 28-minute interview featurette with Franco Nero and Vittorio Storaro.
Man, Pride and Vengeance [DVD]