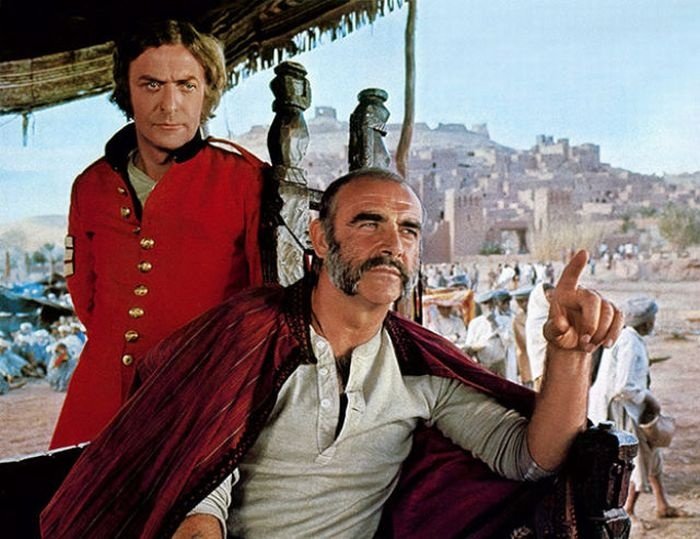 The Man Who Would Be King (1975) – John Huston originally wanted to make a film of Rudyard Kipling’s grand adventure in the late 1950s with Humphrey Bogart and Clark Gable in the leading roles. It would’ve made a hell of a picture. And, as a matter of fact, it did, only with Sean Connery and Michael Caine as Danny and Peachy, the ambitious British soldiers/con-artists/Freemasons turned adventurers in India.

Huston’s adaptation of Kipling’s story manages to be both intimate and gloriously sweeping, a larger than life tale on a magnificent canvass (Morocco’s mountains—standing in for Afghanistan—create the breathtaking backdrop) grounded in the strength of friendship and camaraderie, and elevated by a magnificent score from Maurice Jarre, who works a classic hymn into a rousing theme.

It’s pure Huston: an impossible quest, an out-of-reach grail and an ironic twist leading to a supremely glorious failure. More than any other of his seventies films, Huston is able to turn their story into a strange sort of triumph by remaining true to his characters, right down to the riveting conclusion and the haunting coda narrated by Caine. He offers wonderfully old-fashioned storytelling—muscular, dramatic, grounded in character and driven by magnificent twists of luck and fate that arise like poetic justice dished out by a wry god—for the modern age.

The colonialist perspective on the Indian and tribal populations as childish, foolish and backwards peoples is sometimes offensive to modern eyes but it certainly captures the attitude of a 19th century British soldier of fortune in India, relating his tall tale of a true story to his Mason brother (Christopher Plummer as Rudyard Kipling). It is, in short, one of the most rousing adventures of the 1970s.

Leaves HBO Max at the end of August. Add to My List on HBO Max

, iTunes, GooglePlay and/or other services. Availability may vary by service.
The Man Who Would Be King [Blu-ray]

The Man Who Would Be King [DVD]

The Blu-ray debut features a DTS-HD Mono soundtrack, which is clean and clear but lacks aural presence, and the vintage promotional featurette “Call it Magic,” which is as much a travelogue through a location shoot as a documentary, but it contains interviews with the star and filmmakers, a couple of alternate takes of scenes (taken from a rough cut?) and footage of Connery doing his own stunt for the film’s climax. Comes in a Warner Blu-ray Book format, with an illustrated booklet and a disc tray in the back inside cover. It’s a handsome package even if the essays lack depth or personality.

Pingback: What to stream: Chris Pine is ‘Outlaw King’ on Netflix, ‘Incredibles 2’ and ‘BlacKkKlansman’ on VOD - Parallax View
Comments are closed.