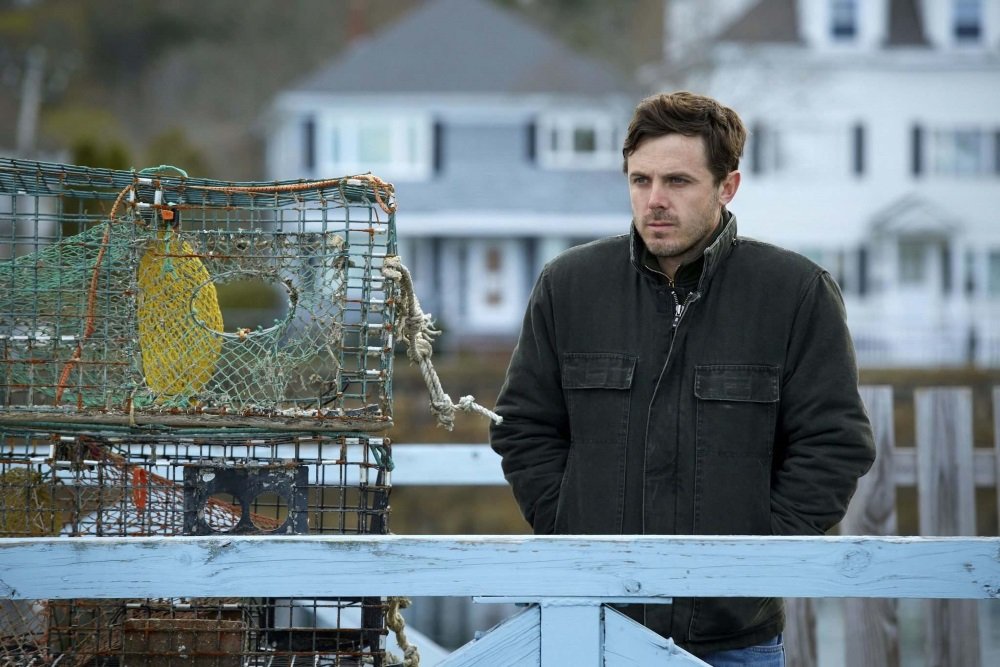 Some emotional wounds can’t be healed. Manchester by the Sea (2016), the third film from playwright and screenwriter turned filmmaker Kenneth Lonergan, takes on that proposition in family drama, or rather a drama about what we do for family even when there are things we can’t do for ourselves.

Lee Chandler (Casey Affleck) lives on autopilot. A superintendent covering four apartment buildings in Boston, he lives in a cave of a basement apartment and drinks his nights away at local watering holes where he makes human contact by provoking fistfights. He’s played by the younger Affleck brother as not so much brooding as disconnected, amiable enough with the tenants but otherwise an antisocial loner. He wasn’t always like that, as flashbacks to better times on the family fishing boat with his brother Joe (Kyle Chandler) and nephew Josh attest, and he’s forced out of seclusion when his brother dies and Lee is named legal guardian to high school teenager Josh (Liam McNeill), Josh’s mother (Gretchen Mol) long out of the picture.

So begins Lee’s reluctant homecoming, which he wants to make as short as possible: take care of Joe’s estate, sell the house, and move Josh back to Boston with him. Except that Josh has a scholastically and socially thriving life in Manchester. He’s on the hockey and baseball teams, he’s in band, he has two girlfriends (neither aware of the other), and he has dreams turning his dad’s money drain of a fishing boat into a commercial enterprise. They clash and argue yet there is no question of Lee’s commitment to his nephew, just as there is no question that remaining in Manchester is tearing at Lee’s soul.

Lonergin comes from the theater and brings a straightforward way of telling stories. The flashbacks are edited into the story so quietly that sometimes it takes a second to realize we’ve slipped back to a previous time. At first a little distracting, it’s ultimately an effective way of showing how the past is so close to the surface of the present.

You might expect Lonergin’s strength to be dialogue and to some extent it is—he has a way of getting at how people stumble over their worlds and fail to communicate—but what really stands out in Manchester is just how complex and full of contradictory impulses and needs these characters are. Another strength is how Lonergin acknowledges the different ways we respond to loss and grief. Josh seems to come on like the angry young man—he’s scrapping during ice hockey practice in our first present-day glimpse of him—but his reaction to the news of his father’s death is almost blank. The biggest immediate change in his life is that he can get away with having sex in the house under his uncle’s more permissive guardianship. Then the bottled-up emotions suddenly pour out when a minor mishap triggers a memory and Josh breaks down in a cross between a panic attack and a grief attack.

It takes longer for Lee to confront his grief, which is stirred up when he runs into his ex-wife (Michelle Williams), now remarried and pregnant. Lonergan doesn’t tease it out like some revelatory shock but it is still a moment best experienced through Lee’s eyes. There is no cathartic moment where everything is solved and there is no perfect solution to how Lee can meet both his and Josh’s needs. There is only a best solution, which is come to with love and understanding and a heartfelt commitment to doing the best we can.

Nominated for six Academy Awards, including Best Picture and Director, and Oscar winner for Original Screenplay and Actor (Casey Affleck).

, iTunes, GooglePlay, and other services. Availability may vary by service.
Manchester By The Sea [Blu-ray + DVD + Digital]

Manchester By The Sea [DVD]

The Blu-ray and DVD releases include commentary by director / writer Kenneth Lonergan, a featurette, and five minutes of deleted scenes. The Blu-ray also includes a bonus DVD and Ultraviolet Digital HD copy of the film.